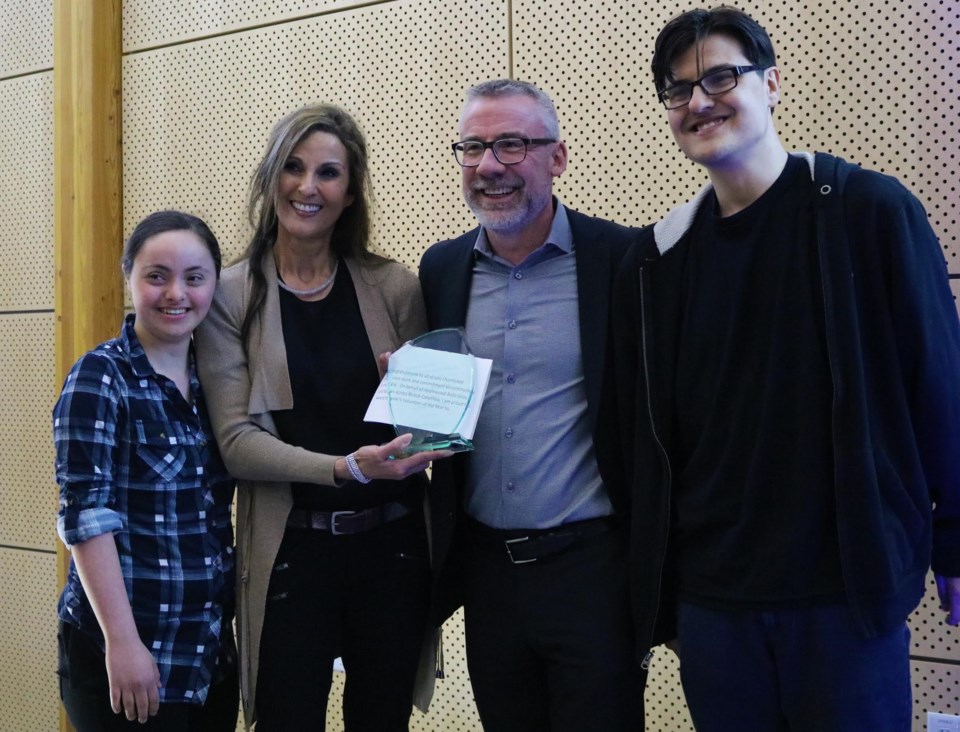 Abbe Gates is pictured with her daughter, Sadie, and her son, Lucas, at the 2018 BC Autism Awards. Photo: Autism BC

Abbe Gates' daughter Sadie was only 11 years old when she was told she couldn't play soccer because her Down Syndrome was a “liability” against the team’s chances of winning.

Crushed, Gates decided to create her own soccer team instead.

In the more than 10 years that have passed since that incident, Gates has continued working to support and create opportunities for individuals with diverse needs to achieve their best - it's why she was honoured as Volunteer of the Year at the inaugural BC Autism Awards in 2018, after her son Lucas, who has autism, nominated her.

Now, AutismBC is asking British Columbians to submit nominations for "everyday autism heroes" like Gates. Winners will be honoured at the 3rd Annual BC Autism Awards and raffle this fall, dubbed "The Heroes in Our Story."

The awards will celebrate individuals "who have had a positive impact on the autism community, whether through volunteering, implementing inclusive hiring practises, inspiring self-advocating or championing opportunities for individuals on the autism spectrum," AutismBC explained in a release.

According to the organization, there are currently more than 60,000 people on the autism spectrum living in B.C., while one in 40 children are diagnosed with the disorder. That means "there are thousands of families across the province who rely on services and support," AutismBC said. To that end, the upcoming awards ceremony serves as "an opportunity to share the stories of people across the province promoting the values of inclusion and diversity."

As Gates' son Lucas wrote in his nomination, “Abbe is the kind of mother a young adult on the autism spectrum would want to have."

He added, “She has organized an inclusive soccer team, created a gala for teens and young adults and she took some time and she even worked at the PAFN (Pacific Autism Family Network) helping new families get the help they need, and ultimately she allowed me personally to have a successful and happy life thus far, with working at the PAFN Hub, where I work today.

"Without my mom, I wouldn't be where I am today, happy and beginning to become independent, and having the dream job.”

The BC Autism Awards are accepting nominations until Aug. 28, with winners in the Volunteer, Self-Advocate, Inclusive Business and Regional Community Impact Makers of the Year categories are set to be announced on Oct. 25. Award winners will receive $1,000 to go towards a project of their choosing, that fits within their category.

The AutismBC raffle, meanwhile, runs until Oct. 25 with an early-bird draw on Aug. 28. This year's raffle is also set to feature a grand prize of a brand-new Nissan Kicks SV, donated by Applewood Auto Group, with funds going towards autism initiatives across B.C.

Do you know an everyday autism hero that could benefit from $1000 towards their project? Since our registration began last week, we’ve already received more than 10 nominations for the volunteer category 🎉. Join in and nominate your heroes today! Visit www.autismbc.ca for more info now! Who’re the everyday heroes in your story? #BCAutismAwards #AutismBCRaffle presented by @applewoodnissanrichmond @applewoodkialangley #Volunteer #Selfadvocate #Inclusiveemployer #Communityimpact @autismsurfsup

As for Gates, “My story is very simple,” she said.

“Both my kids have special needs and I started to see how few opportunities for them were out there, so I created my own ... I am not one to stand back and just walk away, I do something about it, and I will continue until my last breath. I am just a mom, I only want what my kids and all the others deserve, and that’s to be treated equally.”