"This COVID operation is a shoplifter's wet dream," says Steve Merrill of Kelowna.
Feb 12, 2021 11:24 AM By: Amandalina Letterio / Castanet 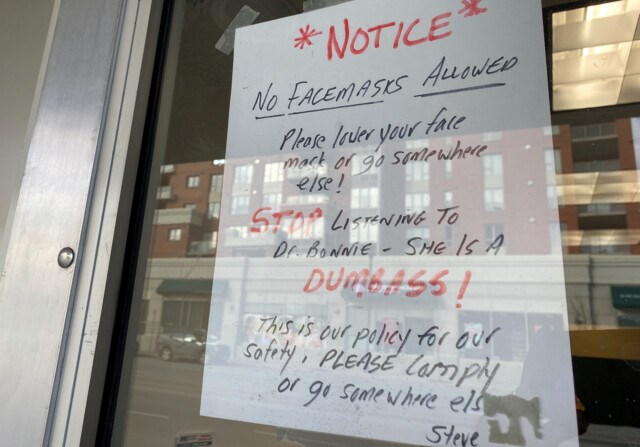 "It's a notice to people that don't know me that we don't want them wearing a mask in a store where there's silver and gold inventory on the shelves," says owner Steve Merrill.

"The first concern is that somebody walks in with a mask on and puts a gun to my head. My cameras in my store don't see through these idiot masks," he added.

Merrill says it's dangerous for any retail business with product on the shelves to have shoppers wearing masks.

"Sunglasses, make-up, whatever — this COVID operation is a shoplifter's wet dream," he explains.

Merrill says he doesn't wear a mask when he goes out, "I feel that my right to breathe fresh air trumps somebody else's right to be afraid of the cold that is the COVID flu."

Despite how he personally feels about masks, and the sign on his door, Merrill says if you come into his shop with one on, he won't stop you.

"If someone was truly sincere about it, it wouldn't be that big of a deal. If I recognized them and they were afraid of COVID-19, of course I'll allow them to come in, don't get me wrong," says Merrill.

Merrill tells Castanet that if government officials come by his shop to enforce mask wearing, he will point to the BC Human Rights Commission, which says merchants should take those who claim they cannot wear a mask due to a medical exemption at their word.

"What a great deal for a thief," he says. "Well, you're not getting into my store with a mask on."

Some jewelry stores in the Okanagan have been simply asking customers to briefly show their faces to security cameras upon entering, and return to shopping with their masks on.

Merrill made headlines last year after he was sentenced to 90 days in jail for failing to file four years' worth of income taxes. During his trial, he attempted to argue he was not a 'person' under Canada's Income Tax Act. The judge rejected Merrill's arguments as “twisted” and “straw man logic” that “defies any rational response.”

Notably, the man responsible for organizing the anti-mask and anti-lockdown rallies in Kelowna over the past year, David Lindsay, has also spent time in prison for refusing to file income taxes. In fact, the judge in Merrill's 2020 tax case cited a BC Court of Appeal decision from 2011 involving Lindsay's refusal to file taxes as precedent for convicting Merrill.

Lung transplant recipient says he was 'taken down' by hospital security for wearing a face shield instead of mask
Feb 9, 2021 10:00 AM