The premier pointed to the Vancouver poultry plant outbreak as "a warning call that we can't get too complacent.”
Apr 22, 2020 3:15 PM By: Castanet 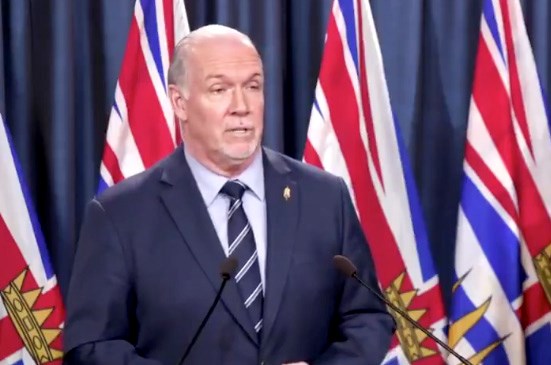 During his weekly press conference following B.C.'s cabinet meeting Wednesday, Premier John Horgan stressed the importance of not rushing to get rid of COVID-19 measures, as B.C. continues to “flatten the curve” of new virus infections.

While new confirmed cases of the virus has remained somewhat steady over the past several weeks, a new outbreak has recently been identified at a Vancouver poultry facility.

Premier Horgan pointed to this new outbreak, where at least 28 workers have tested positive for COVID-19, as evidence that British Columbians can't get complacent in the fight against the pandemic.

“I think the public can expect that I'l have something to say about how we open up sooner than the middle of May, but we need to be guided by the science,” he said Wednesday.

“Although we've seen some very positive indicators in the numbers that Dr. Henry presents daily ... the outbreak in the poultry facility is a warning call that we can't get too complacent.”

Horgan said that early indications from the investigation at the United Poultry Company have found that several workers chose not to stay home from work, despite showing early symptoms of illness, as they were concerned about losing wages.

The people of B.C. shouldn't be taking comfort in the early success the province has seen in slowing the spread of the disease, Horgan said, adding that rushing to ease some restrictions that have been put in place could do more harm than good.

“British Columbians don't want to give up the progress we've made for an early start that will put us back on our heels and perhaps in further restrictions as the summer proceeds,” he said.

“We want to make sure that we have a seamless integration back into as much normalcy as we can find and I'll be making significant announcements about that directly to the people of British Columbia when the time is right.”