Vancouver-based illustrator Lorne Craig drew on his experience as a trail map designer to create the community-minded project.
Jul 3, 2020 6:44 PM By: Megan Lalonde 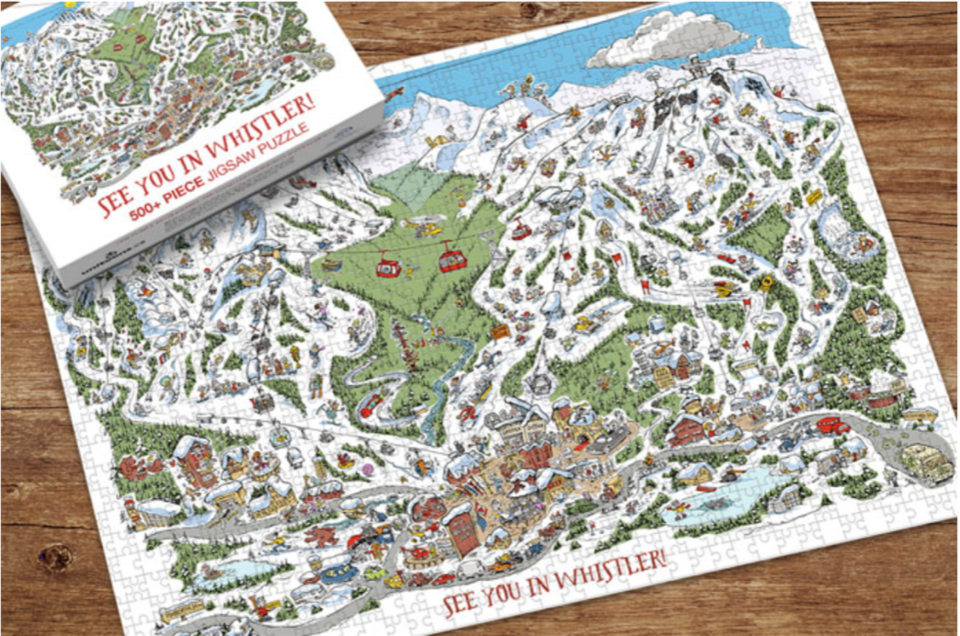 When Whistler Blackcomb abruptly ended its winter season due to the COVID-19 pandemic, cartoonist Lorne Craig found himself in the same boat as many other skiers and snowboarders: With an abundance of time on his hands, but unable to spend his days shredding the slopes as per usual.

So, he decided to get drawing instead.

Craig, who designed Whistler trail maps from 1992 to 2001, drew on his professional experience to hop aboard one of the most popular trends to come out of the pandemic, creating a puzzle he called "See you in Whistler." The 500+ piece, 19”x 28” panoramic cartoon jigsaw puzzle depicts Whistler and Blackcomb mountains, featuring its iconic runs and the town's idyllic pedestrian village, in addition to characters, animals, drawings of other popular local activities, and a few hidden "easter eggs" for locals to spot.

"Jigsaw puzzles have been rediscovered in these COVID-19 times," Craig, who splits his time between Vancouver and Lillooet Lake, said in a release. And with regional travel now OK'd as part of B.C.'s Phase 3 reopening plans, the puzzles "are also perfect for family nights at the ski cabin," he added.

Best of all, the project includes a charitable element. A portion of the proceeds from each puzzle sold will benefit the Whistler Community Services Society (WCSS), an important organization that serves the local community through its food bank, as well as through numerous community outreach programs.

"This is a way that Whistler visitors from around the world can offer local support," said Lori Pyne, WCSS's interim executive director in the release. "We're hoping this idea goes global. You are the pieces of our community puzzle!"

Those who are feeling extra generous can also pay for an additional personalized feature on their puzzle - since the puzzle is being promoted and funded using the IndieGoGo crowdfunding platform, Craig is inviting those who opt for the highest level of support to send in a photo, from which he'll draw a cartoon version of the into the puzzle art. "You'll be immortalized on your own piece of Whistler," he said.

For more information or to reserve one of the limited number of puzzles available, check out the IndieGoGo campaign.