BC Ferries worker tests positive for COVID-19; one in three may be ill 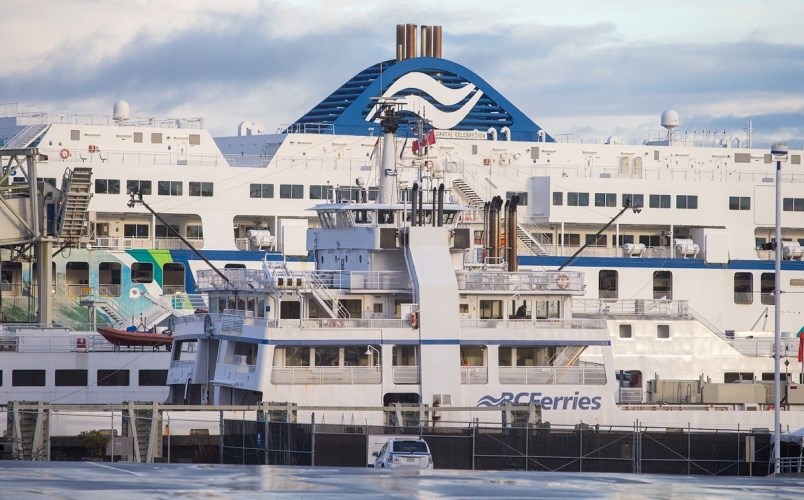 One in three BC Ferries employees may have COVID-19. Photo: Adrian Lam/Times Colonist

At least one BC Ferries employee has tested positive for COVID-19 and upwards of 35% of the service’s workforce may be ill, according to an emergency operations centre directive issued Wednesday.

As a result, the government-regulated ferry service is now under “phase 4” of its pandemic plan, which prepares measures to immediately ban all non-essential travel and further reduce its service schedule. So far, BC Ferries is merely advising people to avoid non-essential travel.

Spokesperson Deborah Marshall said the augmented pandemic response is not a result of the large number of “absenteeism” but because of the lower traffic, as routes are running below 50% capacity.

The memo states that phase 4 is implemented when 21-35% of employees are or may be “ill at the same time.”

Marshall said the employee who tested positive for COVID-19 was working the Swartz Bay-Tsawwassen route and seven other employees have been tested for coming in close contact with their co-worker. Out of an “abundance of caution,” many employees are isolating, said Marshall.

The employee was not in contact with the public and last worked March 10, said Marshall.

BC Ferries is an extension of the highway system and thus serves an essential need to supply Vancouver Island with goods during the pandemic response. Ferries will need to keep operating at limited capacity to keep up with those shipments.

Marshall said determining essential travel basically comes down to following instructions of the Provincial Health Officer, which at this time is: If you don’t need food, medication or medical assistance then stay home (so do not go on a ferry for any non-urgent need).

For now, passengers boarding the ferries are asked to distance from one another. To help do this Transport Canada has lifted a requirement that people must exit their vehicles, thus allowing them to stay inside. BC Ferries has also shut down its cafeterias and is stepping up cleaning of public areas.

Marshall said the company will be reviewing its operational needs but did not indicate at this time if layoffs will follow.

Vancouver needs help as it focuses COVID-19 response on Downtown Eastside: mayor
Apr 3, 2020 2:05 PM
BC Ferries suspends service on some routes over COVID-19 pandemic
Apr 3, 2020 1:07 PM
RCMP finds no evidence of criminal wrongdoing by B.C. MLA Jinny Sims
Apr 3, 2020 12:00 PM
Comments
We welcome your feedback and encourage you to share your thoughts on this story. We ask that you be respectful of others and their points of view, refrain from personal attacks and stay on topic. To learn about our commenting policies and how we moderate, please read our Community Guidelines.