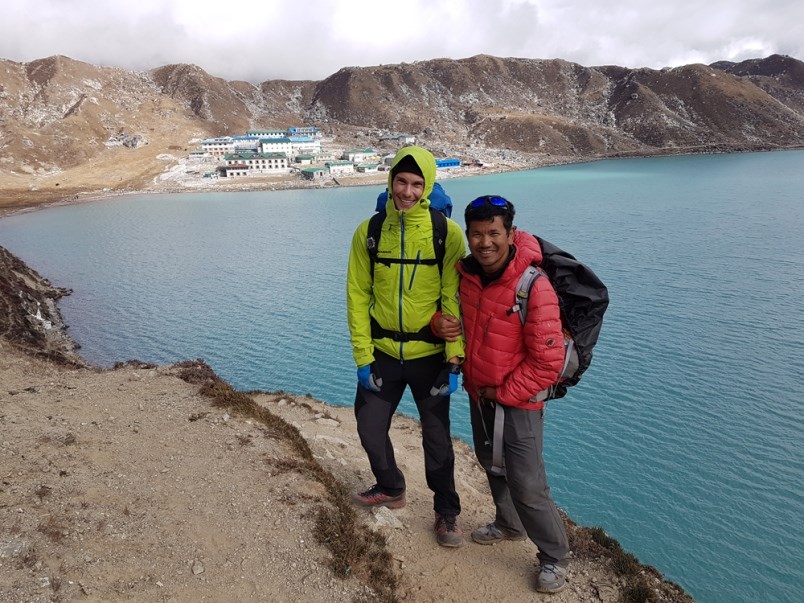 In Squamish, it isn't unheard of for residents to head off on challenging adventures, such as climbing Mount Everest. It also isn't uncommon for locals to be fundraising to produce a documentary. We seem to have a disproportionately large number of talented film folks here.  But Squamish trekking guide John Gill is taking an unusual approach to both.

He is preparing for his 2020 Canadian Kanchenjunga expedition this spring, when he will climb Kanchenjunga, the third highest mountain in the world, located in the Himalayas.

For every 100 people who climb Everest, only four people climb the 8,600-metre Kanchenjunga, Gill says.

And while he is crowdsourcing to fund his "Friends in High Places Movie Project," about the expedition, it is his Nepalese expert guide, Namgya Sherpa,  he wants to focus on, not himself.

Cameraman Braeden Ennis will also be on the expedition.

The Chief caught up with Gill for a chat about his plans and the impact on the environment and tourism these treks have on beautiful places.

Happy New Year everyone! I'm really excited for 2020 and the challenge that is to come in only 3 months time. Most of all, I'm excited to return to this incredible corner of Nepal and to be even more wowed by Kanchenjunga. Wishing you all a fun and safe 2020. #CanKan2020 #kanchenjunga 📷 @claire.andrew90

Q: So, first of all, we noticed in all your references to the Namgya Sherpa, you don't use a family last name. Is that cultural?

A: Yes, it is different there. Sherpa means "people from the east" — people who came from the northeastern corner of Nepal — so they tend not to have a family name.

His first name, Namgya, comes from the day of the week he was born.

Q: You have been friends with Namgya for some time, how did you meet?

A: He's been a family friend for a long time. My dad trekked with him in Nepal about 12 years ago. I met him because I have a guiding company here and was trying to organize trips from here to Nepal. So, I contacted him to see if we could trek together. We have done a couple of guided trips together and a couple of personal trips together as well. This idea to tackle Kanchenjunga grew over time. It became more appealing when I found out he is from a village at the base of the mountain but has never been home to climb it. Though he wants to.

No one previously has shown interest in climbing it. He can only go if he gets a team of people who want to go. It is really important and special to him that we have built a team of climbers to go do something he wants to do.

Q: You have chosen a unique climbing route from most with Kanchenjunga, why?

A: There have been two Canadians who reached the summit, but unfortunately, one of them died on the descent. Considering mountains like Everest, which have hundreds of people summit every season, Kanchenjunga sees very little attention from climbers, western climbers especially. Most of those who climb are from India because it is a spiritual mountain for them. It is the highest mountain peak in India. Many Indian military expeditions go there, but very few western expeditions.

Q: With filming your expedition, what do you hope to accomplish?

A: The short term goal is to show the Kanchenjunga area. People go to Everest basecamp where there are lots of people and you lose a lot of the cultural importance of the area because it is very westernized.

Whereas, I went to Kanchenjunga a few years ago and it was still very Tibetan, still very true to its heritage and it was incredible to see the contrast. There are other parts of Nepal worth visiting.

I also want to feature Namgya's story to show that we need to be thinking more about the sherpas. Every year, sherpas die on the mountain, just so we can go and climb there. We want to tell their story. We have to consider them and what they are doing for us — and not assume that just because we paid the money we will get to the top.

That is why the emphasis of the movie is our friendship and our very different reasons for wanting to climb. We are going together as friends. It is less about westerners trying to conquer some big mountain and more about our relationship. How we have come together with a similar goal.

The long-term goal is to change the mentality of Himalayan climbing and try and show that there is more importance than reaching the summit. It is about getting to know the people and the area.

Q: A lot of what you do depends on the environment and not having over-tourism so how do you juxtapose what you are doing and those concerns, such as flying with its carbon footprint and the weight on the environment that these kinds of treks create?

A: Nepal has really clamped down. They take a deposit and if you don't bring back your waste, then you don't get your deposit back. You have to prove that you are carrying out all of your garbage and you have to attempt to carry out all of your human waste as well. So, when we climbed  Annapurna, three years ago, which is a mountain near Everest, we took yaks with us and they carried down all the human waste.

It isn't all tourism causing the problem, there isn't the infrastructure for recycling there, so the local people often don't recycle. There are a few charities, one started by a guy in North Vancouver, that started up in Nepal that are based around teaching about recycling and trying to increase it there.

There's a general shift that is long overdue.

Unfortunately, that doesn't answer the question of the carbon footprint in terms of, we have to fly there and that kind of thing. I don't have an answer for that one.

Q: You guide and train in the Sea to Sky Corridor, and many people are talking about over-tourism here. What is your take on that?

A: Part of the problem is that unless you have a way to get away from the over-used areas, like a 4X4 vehicle, or a helicopter, which a lot of tourists don't have, there isn't anywhere else to go than the popular easy-to-access areas. Part of what we try to do as guides is to take people off the beaten path a bit and away from the heavily-impacted zones. There has been progress in terms of making more accessible places to spread people out a bit. That seems to be a solution.

To connect this to what we are planning in Nepal, we want to spread the tourism out there. Some of the communities have no one left to run them. By bringing tourism to an under-visited area, like we are, we create jobs and give people another source of income.

Q: Why should Squamish residents care and support this project?

A: The Sea to Sky is an incredible place to start to dream. This is where I do my climbing, skiing, and hiking. I am from England originally. I moved here for the mountains. Moving here has opened so many doors to go and climb the third highest mountain in the world. I think it is just incredible that our little corner of Canada can grow such big dreams.

For more information on the project, go to kanchenjunga.outdoor·explore.com. The online "Friends in High Places Movie Project" campaign can be found here.