Here's what B.C.’s parties promise on the overdose crisis

A safer drug supply — pharmaceutical alternatives to illicit street drugs — is at the top of the list for frontline service providers and advocates.
Oct 6, 2020 9:18 AM By: Moira Wyton, Jen St. Denis / Local Journalism Initiative 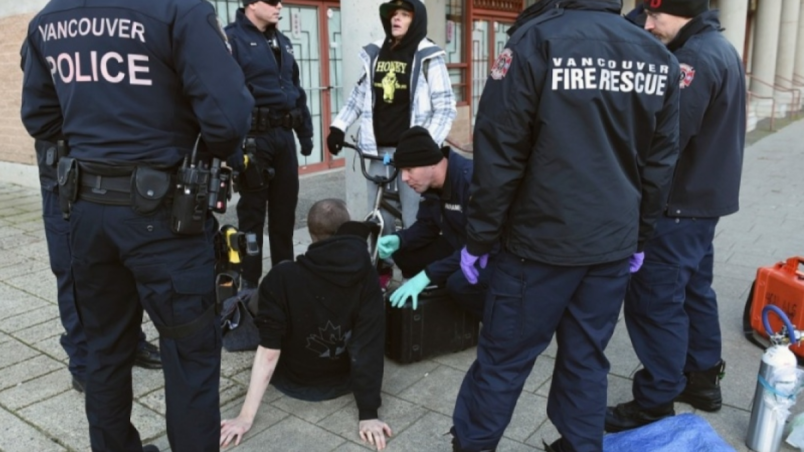 There has been a disturbing increase in drug overdoses in B.C. since the pandemic hit. File photo by Dan Toulgoet

“People don’t want people to die, but at the same time, people are still dying,” said Sarah Blyth, founder of the Overdose Prevention Society in Vancouver’s Downtown Eastside neighbourhood. “We just need to make sure it’s a priority in the election.”

A safer drug supply — prescribing pharmaceutical alternatives to illicit street drugs — is at the top of the list for frontline service providers and advocates, who see it as the only way to prevent more deaths in the short term.

“We need an emergency response,” said Leslie McBain, co-founder of advocacy group Moms Stop the Harm. “Because death is the most important thing here, and safe supply and easier access is key to stopping this ridiculous and tragic number of deaths.”

The governing BC NDP has expanded access to safe supply, but the rollout has been choppy and there have been unnecessary delays, say critics.

Posted by MomsStopTheHarm on Thursday, September 3, 2020

In March, the B.C. government introduced expanded access to safe supply, but only for people who were at risk of both an overdose and COVID-19.

Six months and hundreds of deaths later, the province announced a much-awaited expansion of safe supply, with all registered nurses and registered psychiatric nurses able to prescribe non-tainted drugs.

However, it’s still unclear which substances will be included as possible prescriptions. Advocates are pushing for medical-grade heroin and for inhalable alternatives to crystal meth, in addition to opioids like hydromorphone and Dilaudid.

It took time for the province to implement the expanded safer supply program, said Judy Darcy, who is not seeking re-election but was the NDP’s minister for mental health and addictions.

“Up until then, what we were able to do in light of the federal controlled substances act was pilot projects, and we were doing several different pilot projects that were expanding access,” Darcy said.

“We realized when COVID hit that people were going to be at even greater risk, so we moved within two weeks of the pandemic being declared.”

Jane Thornthwaite, BC Liberal candidate for North Vancouver-Seymour, said that harm reduction, including safe supply, is part of the solution. She pointed out that former BC Liberal health minister Terry Lake brought in overdose prevention sites in 2016.

But Thornthwaite wants to see more focus on addiction treatment to get people off of drugs altogether, along with more prevention like increased counselling in schools.

Thornthwaite said every year she and her staff pick one day to call treatment centres around the province, and they always find between 120 and 130 treatment spots sitting empty. That’s because government funds a limited number, and it costs thousands of dollars for people to pay for treatment on their own.

“I’ve talked to numerous families who have put a second mortgage on their house to help their son… get into these facilities,” Thornthwaite said.

It’s common for people who enter abstinence-based treatment facilities to later die of an overdose if they relapse and start using drugs again. Thornthwaite said that’s because there isn’t enough follow-up after treatment, and because treatment sessions are too short.

If elected, Thornthwaite said the BC Liberals would put in place a system that would fill the gaps that currently exist between detox and treatment, the cost and availability of addiction treatment programs and what happens after treatment.

“There is still a huge gap between harm reduction and recovery,” said Dr. Perry Kendall, former provincial health officer who declared the overdose public health emergency in April 2016. “It’s very important to meet people where they are at because there is no silver bullet.”

Much addiction recovery is abstinence-based, Kendall said, and more needs to be done to support people through the common experience of relapsing by providing ongoing mental health support, housing and support to families of people in recovery.

Opening more beds is not enough, said Kendall, if they’re just focused on removing substances from the equation. He and McBain of Moms Stop the Harm would like to see more government funding of wraparound support services for people in recovery, and more government study and oversight of which programs are effective and why.

“We’ve got a really fragmented system at the moment,” said Kendall.

Darcy defended the NDP’s record on increasing access to treatment, including new funding specifically targeted to First Nations and youth.

She said the NDP had inherited a system of unregulated recovery homes and underfunded mental health and addiction services from the BC Liberals. Darcy pointed out that overdose deaths had been dropping throughout 2019, showing the NDP government was on the right track.

“We’ve been working on all these fronts at once, and we were making progress,” Darcy said. “COVID tragically reversed that process.”

Sonia Furstenau, leader of the Green Party of BC, said the overdose crisis needs to be treated as an emergency, with all the parties working together towards a common goal, much as they did to respond to the COVID-19 pandemic.

Furstenau took aim at the NDP for not implementing a call from B.C.’s top doctor to decriminalize drug possession.

But the B.C. government rejected that recommendation, saying it’s up to the federal government.

“Decriminalization is what has been called for, and it’s not enough for Horgan to say: ‘I wrote a letter to the prime minister.’ He needs to fight for it,” Furstenau said.

Kendall agreed the next government needs to advocate for decriminalization at the federal level but said so much could be done at the provincial level.

Thornthwaite said the province doesn’t have to wait for the addiction treatment system to be improved to also act on decriminalization. But, she said, she prefers the idea of diverting people who have addictions and have been charged with a criminal offence to drug court, an option that already operates in B.C. with the goal of “achieving and maintaining abstinence from illegal drugs.”

Supporting Indigenous people to remain connected to their communities and cultures is top of mind for many people who work to prevent overdoses among those most at risk.

First Nations, Métis and Inuit in B.C. are about 15 times more likely to die of an overdose than non-Indigenous people in the province, according to data from the First Nations Health Authority and BC Coroners Service.

“We haven’t gotten the chance to help ourselves,” said Chris Livingstone of the Western Aboriginal Harm Reduction Society.

A member of the Nisga’a Nation, Livingstone works on harm reduction and healing programs in Vancouver that are culturally driven. He wants to see the way cleared for First Nations communities to house and support their urban members in cities around B.C. and to connect people with culturally safe harm reduction services.

“We know addiction is all about isolation and disconnection,” said Livingstone. “Connecting people with culture and tradition and food harvesting, these are under-utilized tools in harm reduction.”

That includes expanding access points in rural and remote areas and establishing more harm reduction services in First Nations communities with trained health-care professionals, so that people don’t have to leave their communities to use substances safely or seek treatment.

The pandemic, Livingstone says, has shown just how many resources the government can mobilize in a crisis.

Now he wants to see cross-ministry collaboration to combat overdoses and not silo the issue, as advocates argued the NDP did with the creation of a separate ministry for mental health and addictions in 2017.

All four experts said that creating a separate ministry made it more difficult to deliver what was promised because of the ministry’s small budget compared to the main health portfolio.

“My experience is you build distinct budgets and responsibilities and it impedes the work or makes it more challenging to incorporate the work into the larger ministry,” said Kendall.

He hopes the next government will combine the two ministries again and appoint a minister of state to oversee and advocate for mental health and addictions-specific work within the broader health portfolio.

BC NDP Leader John Horgan defended the decision to carve off a separate ministry, “so a minister was getting up every morning focused on addressing these challenges.”

“Having a ministry has enabled us to focus on not having people working off the side of the desk on the overdose crisis, which is too much what was happening before,” Darcy said.

Blyth says the work currently underway and pledged by leaders is important, but she hasn’t seen the needed urgency to stop deaths.

She has trouble sleeping at night knowing how rough people are forced to live and hearing the news of new deaths every day when she wakes up. Leaders would feel the same, she thinks, if they saw the reality and how much worse the pandemic has made it for people who use drugs.

“My patience is totally worn thin about being on the frontlines of two public health emergencies,” said Blyth. “People need safe supply, they need housing, and all the things that make someone’s life livable.”

“I just want to see some implementation.”

Moira Wyton and Jen St. Denis are Local Journalism Initiative reporters with The Tyee, where this article first appeared. This is the second in a series about provincial election issues. The first one was about homelessness.