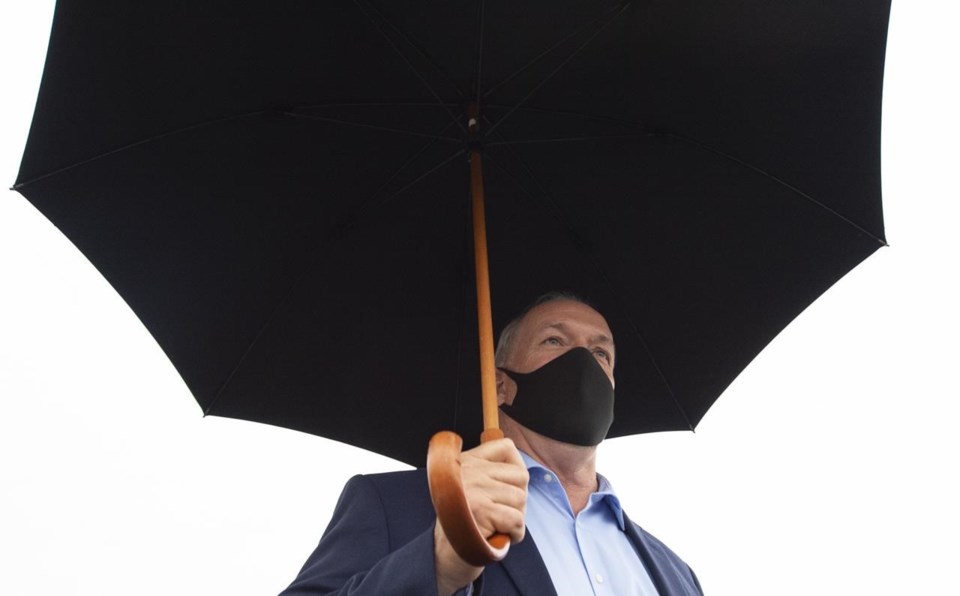 Horgan has been leading a minority government for more than three years, but he said the NDP wants a majority so that it can govern without worrying about its survival.

Horgan spent much of a campaign stop Wednesday in the crucial political battleground of Surrey defending his decision to call a snap election.

"A lot of people have asked me over the past couple of days: 'Why now?' " said Horgan. "I'll remind everyone it's been 3 1/2 years since the last election and we have been in a minority situation where at any time the government could have fallen at the whims of a handful of members of the legislature."

But the leaders of the Liberal and Green parties said Horgan has manufactured a climate of political instability as his reason to call an election that only he and his New Democratic Party wants.

"Now John Horgan says he's a victim of unstable government," Liberal Leader Andrew Wilkinson said at a news conference. "That's ridiculous. There is no instability in Victoria other than John Horgan's instability in deciding to call an election purely for his own purposes."

B.C.'s election was set for October 2021 under B.C.'s fixed election law, but Horgan called an early vote for Oct. 24.

The NDP had an agreement to govern with the Green party since the 2017 election, but Horgan said the deal started showing signs of instability in the legislature this summer.

He said the government had to set aside proposed mental health legislation that would have permitted officials to place youth with substance abuse issues involuntarily into care for a week.

Horgan said the government was not able to secure the Green votes needed to pass the legislation, which was also publicly opposed by the coroners' service, the Union of B.C. Indian Chiefs and the representative for children and youth.

Green Leader Sonia Furstenau said Horgan is using the failed attempt to introduce controversial legislation as a cover to call an early election.

“When the NDP use Bill 22 to mislead B.C. about the need for an election, despite all the groups opposed to it, you're getting a glimpse of how they will govern as a majority," Furstenau said in a statement Wednesday.

Furstenau, who has called Horgan's decision to call the early election irresponsible and unnecessary, said the agreement the Greens had with the NDP did not mean obedience to the governing party.

Earlier this week, Furstenau said she spoke with Horgan prior to the election call and told him the Greens were committed to a stable government over the next year.

The Liberal leader told delegates at the annual Union of B.C. Municipalities convention that the NDP took too long to implement its pandemic recovery plan, which was introduced last week.

"What we found was the plan was delayed by a full three months for electoral reasons so the NDP could use it as a springboard to run in to an election," he said.

Horgan said he wants the certainty of a majority during uncertain times.

"None of us contemplated a global pandemic 3 1/2 years ago," he said. "I believe the people of B.C. want me to focus on today and tomorrow, not yesterday."

-- By Dirk Meissner in Victoria.

This report by The Canadian Press was first published Sept. 23, 2020.