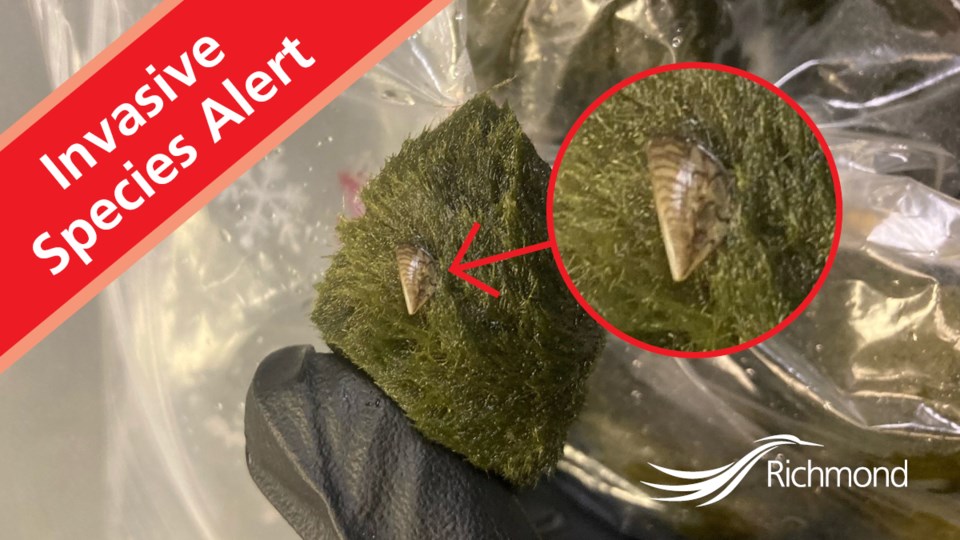 Zebra mussels are an invasive aquatic species in B.C. and are found attached to moss balls sold from stores.City of Richmond

If you own moss balls in your aquarium, a tiny invasive species may have hitched a ride home with you from the store.

The City of Richmond and many B.C. officials are alerting residents of zebra mussels that are known to hide in popular decorative aquarium plants – moss balls.

According to a statement from the province, more than 600 inspections at retail aquatic pet and plant stores found zebra mussels in moss balls at multiple locations including Terrace and the Lower Mainland.

“The tiny mussels can wreak havoc on aquatic ecosystems, salmon populations, hydro power stations and other facilities because they multiply rapidly and are extremely difficult to eradicate,” reads the statement.

Zebra mussels attach themselves to moss balls that are often sold as “marimo moss balls” and are usually bought to help improve water quality.

Moss balls can be safely disposed by sealing them in a plastic bag, freeze them for at least 24-hours and then boil them for one minute.

Zebra mussel-infested water from home aquariums should not be poured down the drain or into any residential water system, the statement added.

Residents who find zebra mussels are asked to call the Report All Poachers and Polluters hotline at 1-877-952-7277.

For more information on how to deal with the moss balls and untreated water, visit bit.ly/2Ook1n0