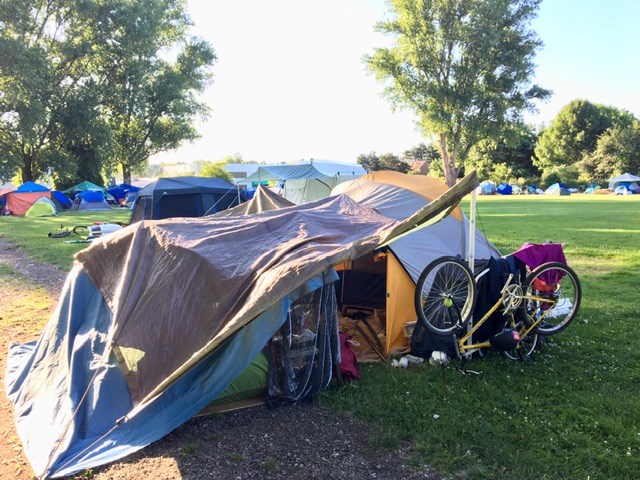 The Strathcona Park homeless camp, where more than 200 tents began occupying a large portion of the green space earlier this year. File photo by Mike Howell

Have you ever been asked for change by someone experiencing homelessness on the street, only to deny their request based on an assumption that those funds would be mismanaged, or spent on activities that would only worsen that individual's current situation?

If so, you're not alone.

But according to the newly-released findings of a bold B.C. study, those preconceived notions may not be rooted in fact.

Vancouver-based charitable organization Foundations for Social Change, in partnership with the University of British Columbia, is responsible for "the New Leaf project," a stereotype-busting study and social program that's being heralded as a "global first."

As part of the project, researchers provided 50 people who had recently become homeless with a one-time lump sum direct cash transfer of $7,500 in the spring of 2018. The program's recipients had full control over how they chose to spend the funds.

Researchers tracked participants' lives for 12 months after doling out the cash, and compared recipients' outcomes to those of a control group who were also experiencing homelessness, but didn't receive the payment.

Preliminary findings show that on average, those who received the cash moved into stable housing faster than individuals in the control group. The results, set to be peer-reviewed next year, also demonstrate that cash recipients achieved and maintained a level of financial and food security in the year following the payment, increasing their spending on food, clothing and rent and reducing their spending on products like alcohol, cigarettes, or drugs.

Empowering the 50 cash transfer recipients to meet their own needs and move into housing faster also freed up space in shelters, saving the shelter system $8,100 per person over the year-long study, Foundations for Social Change explained in a news release.

In order to receive the $7,500 direct transfer, individuals were required to meet criteria that showed they do not misuse or abuse of substances, explained Dr. Jiaying Zhao, principal investigator and professor at UBC. "These individuals also demonstrated no major symptomology for mental health disorders, and showed a readiness for change," Zhao added.

The motivation behind the social research program, which also served as Foundations for Social Change's first initiative? To show the viability of cash transfers for people who are experiencing homelessness, explained Claire Williams, Foundations for Social Change's CEO, in the release. "To prevent people from becoming entrenched in homelessness, we need to provide meaningful support as close to the time of becoming homeless as possible," she said. "Our research shows that cash transfers allowed people to access housing faster, improving stability and lowering the risk of trauma."

One New Leaf project participant, Ray, said he was living in an emergency shelter, "trying to find a way forward," upon finding out he had been accepted to receive the funding.

"The money gave me the resources I needed to get out of the shelter and push for the social programs and the computer class I needed," he said. "It was an important stepping-stone and it gave me a choice. It gave me a chance."

In another video, a recipient named Katherine says she felt "hopeless, like I was stuck and I couldn't go any further," prior to joining the New Leaf program. She says she used the funds to buy clothing, visit a chiropractor, and take her cat to the vet.

"I think getting the transfer of the New Leaf cash is helpful because it really gave me an opportunity to grow and to dream. After, it just felt like I had opportunities to move on in my life," she explained.

While researchers acknowledge that homelessness is a "pervasive problem" that lacks one single solution that's effective in all cases, the New Leaf project's findings show that direct, lump-sum cash transfers are "a bold and innovative solution" that could "provide a transformational difference" for individuals who have recently become homeless, like Ray and Katherine.

As the organization states on its website, researchers "believe we need to go beyond managing the homelessness crisis through the provision of emergency services such as shelters and meal programs, and look at interventions that can lead to long-term, sustainable change."