Laurie Bayly’s woolly rendition of a mitten-clad Bernie Sanders, which measures 15 centimetres high, has turned into a fund­raising effort that the elementary-school teacher and counsellor never expected.
Jan 30, 2021 12:22 PM By: Jeff Bell 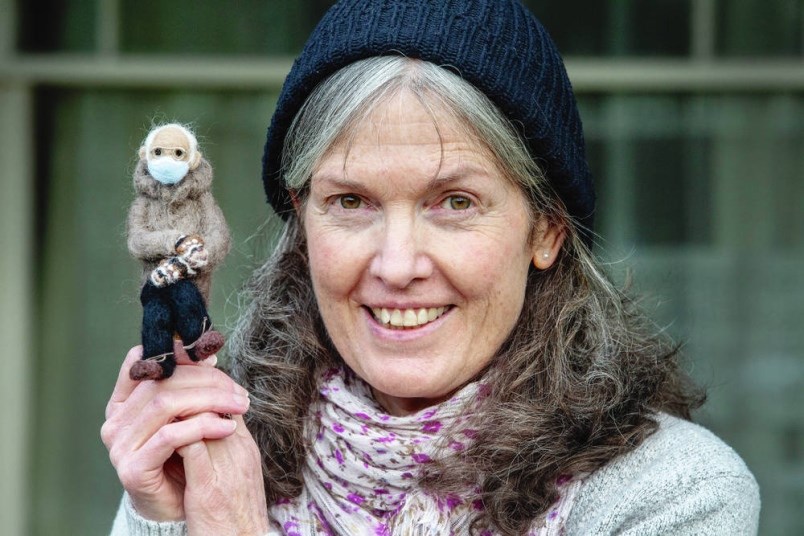 Laurie Bayly’s woolly rendition of a mitten-clad Bernie Sanders, which measures 15 centimetres high, has turned into a fund­raising effort that the elementary-school teacher and counsellor never expected.

Although she rarely posts anything on Facebook, a recent entry featuring her “felted” Sanders has generated a raft of charitable donations from people wanting a chance to win a draw for the pint-sized American senator.

Bayly is a long-time felter, an art form that involves poking a special type of barbed needle into a form of wool called raw wool roving to make shapes.

She said the Sanders figure took about eight hours to make, and another one is in the works because of all the donations that have been coming in.

Bayly also uses her felting to make animals with her students at James Bay Community School and McKenzie Elementary school.

All sorts of memes involving the Democrats’ former U.S. presidential-nomination candidate have been popping up since he appeared at President Joe Biden’s inauguration, watching the proceedings while sitting in a folding chair, bundled up and wearing woollen mittens.

T-shirts and other items with the popular image have been generating money for charity, and Bayly decided to do her part, as well.

“It’s a bit overwhelming, to be honest,” she said of the attention she’s getting. “I posted this and away it went.”

Bayly said the idea came when she was chatting online with friends.

“We were talking about Bernie Sanders and then someone said: ‘You should felt Bernie,’ so I did,” she said.

“I absolutely respect the work he does in the world.”

Pretty soon, it became a ­fund­raiser, with charity donors eligible for a draw to win the Sanders figure. Participants donate to a charity, then send their name and the organization they supported to Bayly’s Facebook address. The names will be written down and put in a hat, with a winner drawn this weekend by a third party.

Bayly said she has already received hundreds of entries.

While she wants people to choose the charity they support, she asked that their donations go to those who are struggling because of the COVID-19 pandemic.

The real story here, she said, is the fact that people are pitching in, working together and following provincial health officer Dr. Bonnie Henry’s reminder “to be kind and take care of each other.”

“They’re offering donations, they’re responding with generosity and, for me, it’s been a really lovely reminder of how we can do this together,” she said. “We can all do a little part.”

Many have been donating to food banks around the province, she said.

For those looking for an idea of where to donate, Bayly ­suggested the Greater Victoria Coalition to End Homelessness and the Red Cedar Cafe, a non-profit eatery with a pay-what-you-can policy.