The timeline for when provincial officials will allow people to travel outside their home regions is anybody’s guess.
May 26, 2020 12:41 PM By: Glen Korstrom 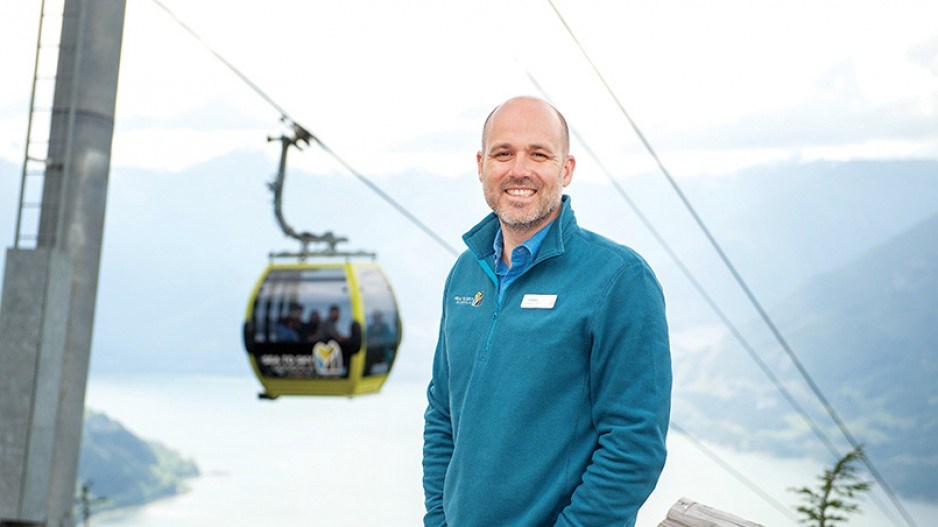 Sea to Sky Gondola general manager Kirby Brown: “I am enthusiastic about this new moment in time, when it will be British Columbians embracing – for some in a very new way – their own backyard” | David Buzzard Photography

After months of living under government travel restrictions, British Columbians will likely get the green light soon to explore their province as long as they take precautions to limit potential exposure to the COVID-19 virus.

“We need to think about later on in the summer, if things keep going the way they’re going, then yeah, let’s look at how we can go to our second homes or go to some of the tourist areas and experience it here in B.C.,” B.C.’s provincial health officer, Bonnie Henry, told media earlier this month.

Premier John Horgan has also said that part of his government’s restart plan is to work in tandem with its Destination British Columbia arm in “encouraging people later in the summer to visit other parts of B.C.” To that end, his government yesterday (May 25) announced that it will provide $10 million in grants to 59 tourism-marketing organizations that promote specific B.C. communities.

Staycations are expected to soar this summer given that the U.S. border is closed to all but essential travel until June 21, and that date is likely to be extended. Travelling anywhere outside Canada would also come with a 14-day period of self isolation on return.

Airlines are operating domestic flights. Flair Airlines CEO Jim Scott told Business in Vancouver that he anticipates having four of his seven airplanes in operation this summer, with a fifth plane in the air by September.  Flair’s flights out of Vancouver International and Abbotsford International airports include destinations such as Kelowna, Calgary, Edmonton, Toronto and Ottawa.

The federal government has banned cruise ships from docking in B.C. until July 1, and Henry was clear earlier this month that she wants that date pushed later into the year.

“This is not the time for that type of a risk to be taken in our province,” she said. “And certainly not in our ports, either Vancouver, Victoria or Prince Rupert or some of the other places where these cruise ships have gone in the past.”

Most travellers are likely to travel by car and take precautions at gas stations where there will undoubtedly be paper towels to keep people from touching the same gas hose nozzle, and plexiglass to shield clerks inside gas station convenience stores.

The timeline for when provincial officials will allow people to travel outside their home regions is anybody’s guess.

Destination British Columbia CEO Marsha Walden told BIV that she is not sure whether the government directive will go from the current order encouraging “hyper-local” directly to provincewide travel or whether Henry will suggest an interim phase where people are asked to limit travel to within a specified radius from their homes.

“There might be an interim phase,” Walden said. “We’re planning for both scenarios.”

Destination British Columbia typically partners with tourism-sector businesses, but Walden said partnerships are in the works with non-tourism-related organizations such as the British Columbia Automobile Association (BCAA), the BC Liquor Distribution Branch and TransLink.

The partnerships could result in advertising promoting travel to B.C. tourist destinations in liquor stores and buses and perks for BCAA members when they get to the destinations.

Walden said the provincial tourism marketer is also likely to pump marketing dollars into a mix of digital and traditional media.

“We all have an interest in restarting the tourism economy,  so [the campaign is about] how can we work together to really amplify and encourage British Columbians to explore their own province this summer,” she said.

Tourism operators cannot wait for governments to tell residents that it is OK to travel.

“I’m looking forward to the opening as long as it is not too late for us,” said Mike Helfrick, owner of Red’s Rentals  and Marina on Shuswap Lake in Sicamous. “If it’s in September, that’s when everyone is winding down and not coming to our lake already”

Helfrick, who said his seasonal boat-rental business has not received much government help, relies heavily on July and August business to get him through the year.

“There are a lot of small businesses like myself, he said. “I’m just hopeful that [the government] will open up travel within further distances than your direct local area sooner than later.”

Helfrick has been renting boats since before Victoria Day and his staff’s routine is to use a high-grade disinfectant and then hose down the boats after each use.

Sea to Sky Gondola general manager Kirby Brown told BIV that his staff also regularly disinfects their gondola cars and educates visitors on how to stay socially distant from others.

“There comes a time when it is our individual responsibility to find out how to move amongst one another in a way that is respectful and responsive, because the relaxations are coming, and we need to get this incorporated into our day-to-day habits, and lifestyle,” he said.

“I am enthusiastic about this new moment in time, when it will be British Columbians embracing – for some in a very new way – their own backyard.” •

Vancouverites set record in walking, biking and transit use in 2019
Jul 7, 2020 4:45 PM
Government upgrades virtual identification options to obtain BC Services Card
Jul 7, 2020 3:37 PM
Comments
We welcome your feedback and encourage you to share your thoughts. We ask that you be respectful of others and their points of view, refrain from personal attacks and stay on topic. To learn about our commenting policies and how we moderate, please read our Community Guidelines.