Care-home visiting rules could ease in B.C. by summer

The visitor policy is in development with the Health Ministry and public health units
Apr 27, 2020 7:46 AM By: Cindy E. Harnett 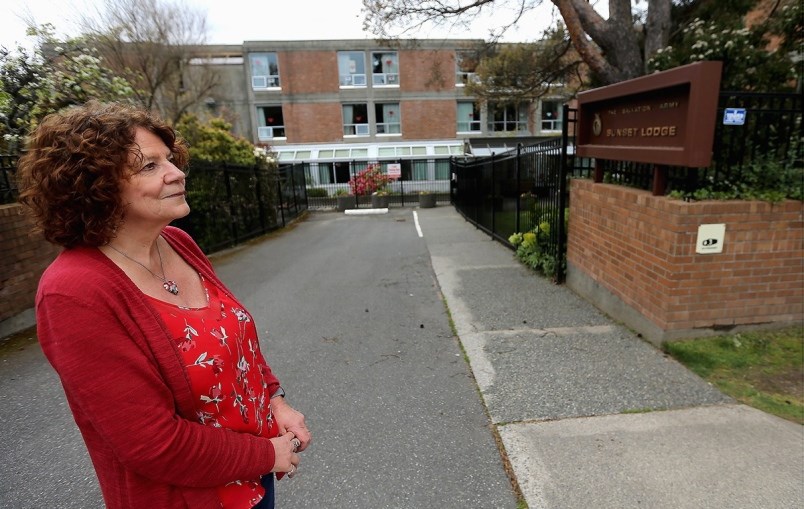 B.C.’s top doctor hopes to ease COVID-19 restrictions on visitors at seniors’ residences and hospitals this summer, allowing at least one family member to visit a loved one.

“I absolutely hope to be able [to have] at least have one family visitor be available, be able to go into long-term care to spend time only with their family member,” Dr. Bonnie Henry said.

Henry stressed changes to restrictions of any sort will be slight modifications and are dependent on the number of new COVID-19 cases and hospitalizations decreasing. “I don’t see us being able to open up care homes like we had, where there’s group events and families and others come in to be with people.”

The visitor policy is in development with the Health Ministry and public health units. It’s not yet clear, according to the ministry, whether one visitor means one designated person or whether that family member could change from visit to visit.

If visitations are relaxed, it will be great news for Maggie Vause and her three siblings. Their father, George Kazmiruk, has been a resident of Sunset Lodge in Vic West since August. Wife Frances died about three years ago. Kazmiruk turns 90 on Monday.

That would have been a “great big party” before the pandemic struck, said Vause.

Family, including four grandchildren, have been discouraged from even appearing in the courtyard outside his second-storey window. Any items or gifts going into the home must be bagged and quarantined 48 hours first.

“It seems really extreme, but they are trying to keep them safe and that’s the most important thing really, isn’t it?” said Vause.

Kazmiruk is an avid newspaper reader and receives lots of letters from family. He’s done video chats, but his dementia makes it harder to connect that way. Vause, who had been regularly visiting on Saturdays, said she would love to be able to see him in person. “It’s really hard on everyone. It’s that touching and hugging and just seeing him. It’s really just that.”

Opening up visits would also be good news for Port Alberni’s Debbie McBride and her 95-year-old mother-in-law in residential care in Nanaimo. Family here and abroad have had to settle for video calls using FaceTime.

“She’s amazing,” said McBride, noting her mother-in-law keeps in touch with her children, grandchildren and great-grandchildren, along with extended family in England. “She’s done a great job with technology. But, absolutely, it’s not the same.” 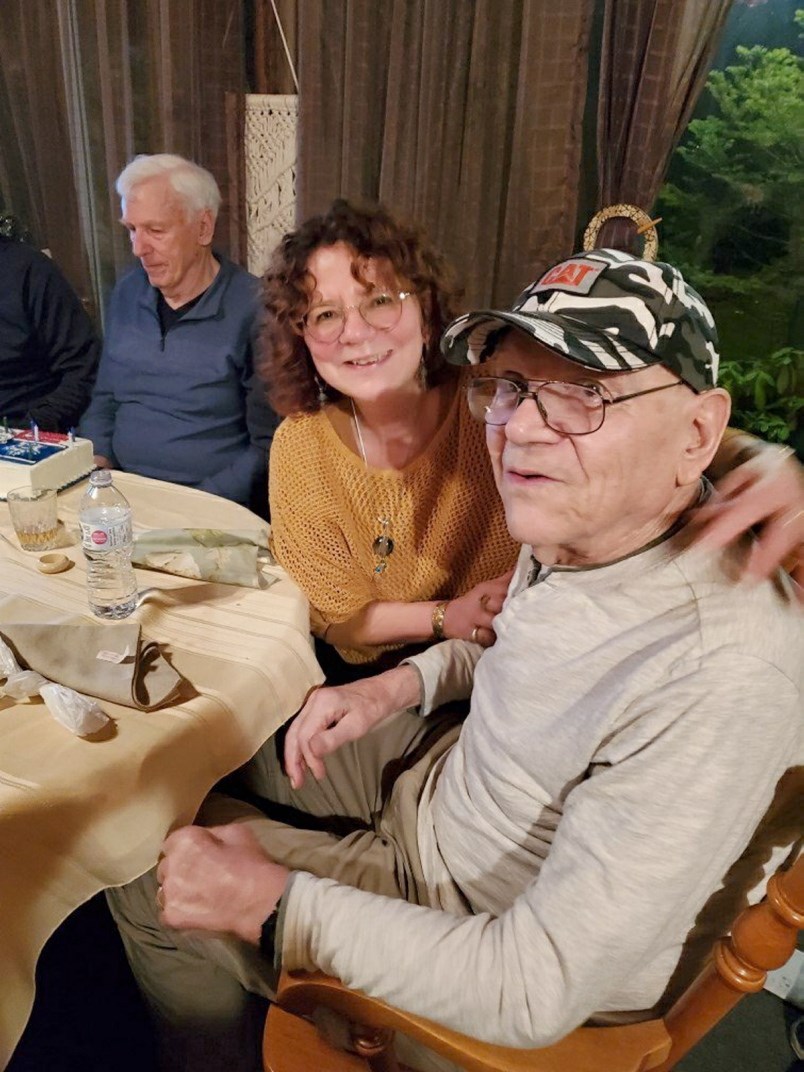 Maggie Vause with her father, George Kazmiruk, who has lived at Sunset Lodge in Vic West since August. He turns 90 on Monday. Photo courtesy Vause family

Henry said she understands the impact restrictions on visits have had on the elderly and sick, “particularly people with dementia and other medical conditions.”

It’s especially hard when someone is dying of COVID-19, because of the need for infection prevention and control.

She said she expects exceptions to vistation rules to continue for people in long-term care or hospital who are at the end of their lives. In these cases, plans are made with medical health officers, staff, family and the resident or patient.

“I know in intensive care units in hospitals they’re going to extraordinary lengths to make sure family can be as close as possible, recognizing that we have to wear [personal protective equipment] and make sure that the staff are protected as well,” said Henry.

Island Health has not had an outbreak of COVID-19 in a long-term-care or assisted-living home. There are 20 such outbreaks in the rest of the province.

If Island Health does have such an outbreak, the plan is to move affected individuals out of the care home “if it makes sense to do that” and place them in a hospital — if they choose critical care — or in a designated long-term-care facility.

On the south Island, that facility would be the recently completed long-term care home The Summit at 955 Hillside Ave. The 320-bed facility was preparing for residents from Oak Bay Lodge and Mount Tolmie. Moving of the residents has been postponed because of the pandemic.

Island Health has yet to announce similar facilities for the central and north Island. “Until those options are established, if a patient had to leave long-term care, we could always move those patients to the acute-care system,” said Ben Williams, Island Health’s interim vice-president of medicine, quality and academic affairs. “It would be better to move them to a long-term care facility. It’s just taking us longer to set up those options.”

Whether residents stay or are transferred is based on many variables, but either way, they will receive the type of care and the level of intervention they choose or have already directed, said Williams.

Henry said one factor is what room they’re in and how well they can be isolated. “Sometimes they’re transferred to hospital, but it’s not automatic. It depends on the family’s wishes, the resident’s wishes, and how well somebody is able to be cared for and isolated within the facility.”

McBride was initially alarmed when she received an Island Health memo dated April 3 from Shelley McClure, regional manager for community-care facilities licensing, saying a resident who tests positive will be transferred to a COVID-19 unit in acute care at Royal Jubilee Hospital, Nanaimo Regional General Hospital or Comox Valley Hospital, regardless of their “MOST” status.

MOST, which stands for “medical orders for scope of treatment,” tells the health-care team what level of treatment a person wishes to receive

The memo was alarming to the McBride family because their mother had carefully planned over the years how, when the day comes, she would prefer to die.

“[She] is living in a wonderful licenced private care facility in Nanaimo,” said McBride. “She is mentally fit and competent. She hopes to die there of natural causes, which would enable her to die with the respect and dignity that is her due.”

After days of calls and emails, McBride was assured the policy has since been revised. Her mother-in-law, if transferred to a hospital, would be placed in a non-acute-care area and offered the type of compassionate care she wants.

The goal of the policy outlined in the memo was to move the residents out as quickly as possible to prevent the spread of the disease, but since then, health administrators, in talking to other health officers in regions of B.C. and Canada, have learned that it only works in certain scenarios, said Williams.

“We’re so grateful on the Island that all this is theoretical because we haven’t had any cases [in long-term care or assisted living],” he said. “If it’s a patient who we can safely isolate at that facility and it’s the end of their life, it might be best to keep them there.

“It’s very individual based on the circumstance.”

The resident, family and health authority and facility staff will make the decision together, he said.

In the face of COVID-19, the most vulnerable people have been long-term care residents, “and so we’re very worried about that population and want to protect it as best we can.”

Strict measures are in place to prevent COVID-19 from entering seniors’ care homes, ranging from cleaning to aggressive testing, isolation of new residents, restricting non-essential visitors and ensuring staff only work at one facility.

“My heart really goes out to long-term-care staff and patients and their families who have all taken extraordinary steps to keep residents safe,” said Williams.