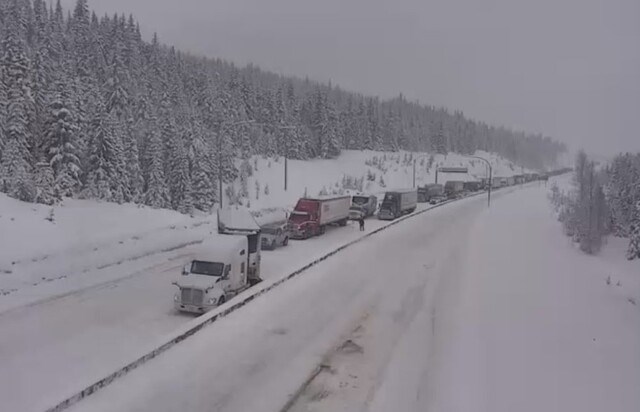 A jack-knifed semi has closed the southbound lanes of the Coquihalla. Photo: Contributed

The southbound lanes of the Coquihalla Highway are closed Wednesday following a crash on the snowy road.

The high mountain pass has received plenty of snow throughout Wednesday morning, 17 centimetres near the summit, contributing to slippery conditions.

Highway cameras show a jack-knifed semi truck blocking southbound traffic near the Falls Lake area, with a long lineup of vehicles behind it.

The nature of the crash is unknown at this time, and DriveBC does not have an estimated time of reopening.

It's slippery on the high-mountain passes Wednesday morning, after snow fell through the night.

Highway cameras from the Okanagan Connector and the Coquihalla Highway show snow-covered roads, but visibility has improved from earlier in the morning, when conditions were described as a "whiteout."

About nine centimetres of snow fell on the Coquihalla through the night, and the temperature currently sits at -2.2 C. While similar snowfall was seen at Pennask Summit on the Connector, temperatures currently sit at -6.4 C.

Several drivers who drove the Coquihalla earlier Wednesday morning posted to local Facebook groups that the snow was falling hard, creating very slick conditions, while the blowing snow made for poor visibility.