This couple, stuck in separate countries, spent what should have been their wedding day having a physically-distanced “border date” (VIDEO) 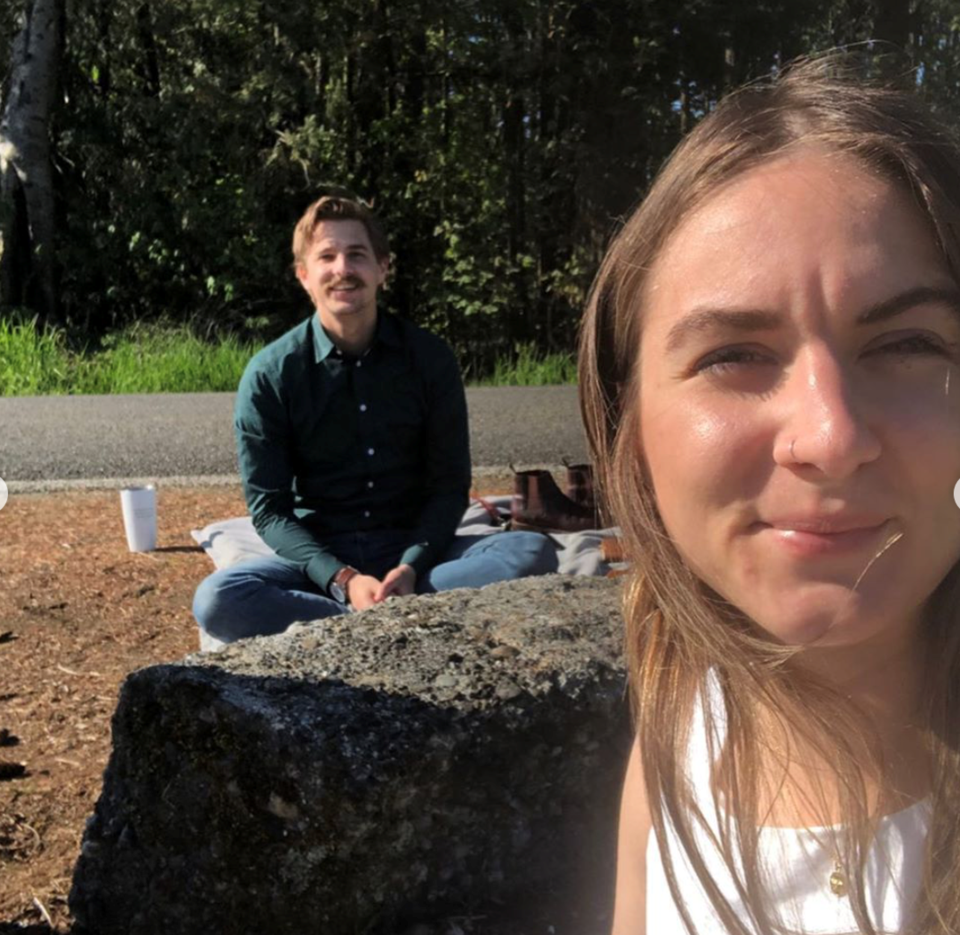 Washington state resident Ryan Hamilton and his fiancee Savannah Koop, who lives in Abbotsford, have been meeting for "border dates" as they remain separated by the COVID-19 pandemic. Photo: Instagram / @savannajolayne

Abbotsford resident Savannah Koop and her fiance Ryan Hamilton, who lives in Bellignham, Wash., had been looking forward to their May 8, 2020 wedding since getting engaged just over two months earlier, on March 1.

But instead of walking down the aisle and saying  ”I do,” the couple spent what was meant to be their wedding day having an extra-special, physically-distanced “border date.”

Since the border separating Canada and the U.S was closed to all-non essential travel in an effort to help slow the spread of COVID-19, the engaged couple has been stuck in separate countries. However, they've been making do by meeting up at a spot in the Fraser Valley, where two roads run parallel on either side of the border. They bring lawn chairs, blankets, coffee and snacks, and obey physical distancing requirements by staying firmly planted in their respective countries.

Sometimes, she’ll head out on her skateboard while he hops on a longboard, and cruise down the roads, separated only by a ditch. “There’s lots of couples and families along the way. It’s nice to see a community of people trying to make the best of a situation,” said Koop in a video posted to YouTube on May 5.

Where I would have walked down the aisle Friday under the trees, over looking the mountains. There is only one thing more that I desire than becoming Ryan’s wife, and that’s the will of God. For some reason, in His divine wisdom, knowledge and sovereignty, God did not allow us to say “I do” on Friday. I did not wake up the next morning as Savannah Jolayne Hamilton. But as Ryan and I seek to do, we made lemonade out of lemons. It was the best day we have had in a long time. We dressed up and met early in the morning at the border. Ry had the Bertuzzi’s set up a picnic for me. We cried, prayed, read scripture and dreamed of our future plans. We thought of the many others in our shoes. We thanked God for His sovereignty despite the heart ache. We then met in the evening. I surprised Ry and he got to “meet” his nephew for the very first time. We were later joined by our best friends and laughed harder than I have in a long time. This virus and the border closures have increased all sorts of complications for us from housing to immigration. It has left us in a constant state of unknown. Our inboxes have been flooded with messages from others separated. It has brought us immense heartache. I try and share the good stuff and the hopeful stuff, but I want to be transparent and say, it has been hard. I could count on one hand the amount of days I didn’t cry in the last two months but we have learned that pain and hope can coexist in our hearts. Having your wedding day pass by is odd. It’s really painful. I don’t want to dismiss that. We are so grateful for God’s sovereignty and truly believe His plan is SO much better than our own. Easier? Probably not. But better and for our good and His glory. God has shown us so much goodness through each other, the comfort of His word, and our closest friends really who SHOWED UP for us. We know that the day we finally get to say “I do” will be so much sweeter than we could have imagined. Ryan you are my greatest gift. Never have I known such a loving and selfless man as you. I will wait. A big thanks to @fleurish.by.sharon who blessed me with the most beautiful bridal bouquet Also, thanks @hinge

Koop has been documenting these dates on her TikTok account, which subsequently went viral. To date, their videos have amassed well over 100,000 views.

We were supposed to get married in two weeks. But are separated. ##fyp ##fiance ##togetherbutapart

“At first, it was just so hard, for so many reasons,” she said in the follow-up video. “Obviously, just not being able to see each other, we also had to change all of our wedding plans.”

They began by planning smaller and smaller gatherings, until restrictions made it clear it wasn’t a good idea to have any kind of gathering at all. “Now we’re kind of at the point where we don’t even know when we can have our wedding, because they’ve extended the border closure for another 30 days," she said.

“We’re just kind of waiting to see what happens, and go from there."

The closure, agreed upon by both countries in March, is currently set to expire on June 21.

When Koop pitched the idea for these physically-distanced meet-ups to her fiance after the border closure officially went into effect, at first “he didn’t really like it,” she explained.

“I think it’s just really hard to see someone in person but not be able to touch them or hug them, especially when you’re going through something that’s really hard, but eventually I think we got really desperate and missed each other, so a couple weeks later we decided we’d try it.”

Koop, on the other hand, was more concerned with following the rules. “I was pretty nervous. I thought, ‘Oh no, like, are we going to get in trouble? What’s the border going to say?’’ We weren’t going to try to cross or do anything stupid, but I was just kind of worried that it was something we weren’t allowed to do.”

When she finally saw Hamilton on April 1, “I cried, like, the biggest tears,” Koop recalled in the YouTube video. “It had been like a month since we’d seen each other.”

She added. “We just hung out, and it was just so nice to see each other. Once we did that, we realized it was something that we could do and probably should do more often.”

As for Koop’s nerves about what border patrol might think of these dates, the couple has had no issues. “They drove by several times and just waved,” she explained.

She recommends anyone thinking of following their example to make the effort, but to ensure they respect local laws and regulations while doing so.

“Just do your part to be respectful of [border patrol] and respectful of the border line, we just want to preserve this right and privilege that we have right now, and we don’t want to ruin it for ourselves or for other families.”

“It’s really hard to be so close but so far, but it’s nice to have a little bit of hope in such a hard time, and it’s a little bit better than FaceTime.”