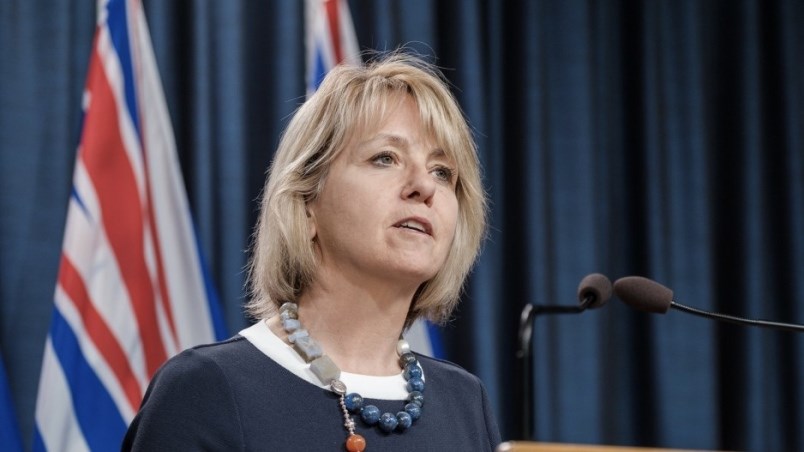 B.C. provincial health officer Bonnie Henry has been providing updates on the extent of COVID-19 in B.C. PHOTO: BC GOVERNMENT

With the COVID-19 virus spiralling out of control, and the province hitting an all-time record of 762 new cases in a 24-hour period, B.C. Premier John Horgan dropped some strong hints on Wednesday, Nov. 18 that he believes provincial health officer Bonnie Henry will declare new health orders to rein in the spread of COVID-19 during her 3 p.m. address on Thursday.

"Dr. Henry will have more to say about gyms and other businesses tomorrow [Nov. 19] as she finalizes the orders that she'll be bringing forward then," Horgan said near the end of his morning news conference.

"When it comes to travel, non-essential travel is prohibited in B.C.," Horgan said, despite Henry so far only issuing strong recommendations for people to not travel around the province.

Henry's only ban on travel in an official health order is one that bars anyone in the Vancouver Coastal Health or Fraser Health regions from travelling outside their home health region for the purpose of playing sports – with "sports" meaning team sports, not skiing.

Tourism authorities in communities such as Tofino and Ucluelet have issued statements urging visitors to stay away, and the Vancouver Island chief medical health officer, Richard Stanwick, has floated the idea that visitors to the region should quarantine for 14 days.

Horgan said he opposes such a quarantine.

"My view is that that a quarantine on Vancouver Island may not be the best way forward," he said.

"I don't know that Dr. Stanwick's suggestion – we didn't get into a lot of detail with it with Dr. Henry this morning – but I'll leave it to her, and he, to figure out what they believe is the best way forward. Non-essential travel should not be happening in B.C."

The urging to stay put came on a day that saw the province hit record highs on many metrics related to the COVID-19 pandemic.

There were 10 new deaths from the virus confirmed in the past 24 hours, according to provincial data.

That is one fewer than the record-high 11 people who died in the 24-hour period that ended yesterday.

Since the first death was recorded in the province in early March, there have been 320 fatalities.

In total 24,422 people have contracted the virus in B.C. More than 69% of those, or 16,914, have recovered. That leaves 327 people unaccounted for, with health officials telling BIV that the most likely reason for that is that they left the province without alerting authorities.

The majority of new cases continue to come from the province's most populous health region, Fraser Health, with many of those cases linked to social gatherings.

The breakdown of new infections by health region is as follows:

New outbreaks at seniors' care homes have been identified at:

The outbreak at Burnaby's Normanna residential care home has been declared over.

The nine active outbreaks in those facilities in the Vancouver Coastal Health region include:

There are now two outbreaks at seniors' homes in Northern Health, thanks to the situation at Peace Villa in Fort St. John. The other home in that region with an outbreak is Rotary Manor Dawson Creek facility in Dawson Creek.

One outbreak at a seniors' living facility in the Island Health Region is at Tsawaayuss-Rainbow Gardens in Port Alberni.

The Interior Health Region has three such outbreaks, at:

• Hamlets at Westsyde in Kamloops;
• Sun Pointe Village in Kelowna; and
• Village by the Station in Penticton.