A menacing-looking barracuda has been netted thousands of kilometres from its usual home in the warmer waters of the Pacific
Jul 15, 2020 2:40 PM By: Times Colonist 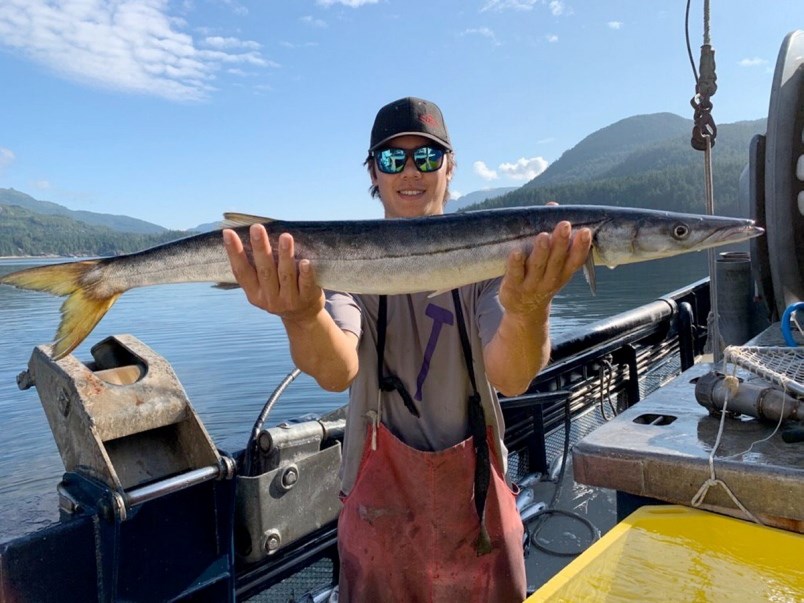 A menacing-looking barracuda has been netted in Alberni Inlet, thousands of kilometres from its usual home in the warmer waters of the Pacific Ocean.

Tyler Vogrig and his father, Brian, were aboard the Nita Maria, their 20-metre purse seiner, this month on a salmon testing run for Fisheries and Oceans Canada when the slender, metre-long barracuda was chased into their net by seals.

“It was crazy to be that up close to a fish like that,” said Tyler Vogrig. “The strength of the animal was amazing. It was a metre long and all muscle and all teeth.”

The barracuda, known for their snake-like appearance, ferocious behaviour and long rows of razor-sharp teeth, was placed in a revival tank to recover from the ordeal. After consulting with Fisheries and Oceans officials, the 12-pound barracuda was released back into Alberni Inlet.

Pacific barracudas are usually found in tropical and subtropical waters, but rarely north of California. It is believed that the fish might have followed warmer currents north.

“It was definitely a one-in-a-million chance to catch something like this,” said Vogrig. “My dad’s been fishing for 40 years and has never seen one.”

Alberni Inlet is about 40 kilometres long, stretching from the Pacific at Barkley Sound and terminating at Port Alberni.

The Royal B.C. Museum has a barracuda in its collection, caught off Otter Point on July 27, 1904.

An Atlantic barracuda was caught in Nova Scotia in 1999, also much further north from its traditional waters.

Vogrig said the barracuda was fatigued when he pulled it from the net and had fresh scars on its rear fin, likely from being nipped by pursuing seals.

Vogrig said the Nita Maria has also netted a few sturgeon in the past two years while doing Fisheries and Oceans testing. He said the sturgeon are in Alberni area rivers that connect to the inlet.

The Pacific barracuda, also known as the California barracuda, grow to a maximum length of 1.2 metres and about 4.5 kilograms, according to research group Marinebio Conservation Society.

Marinebio says Pacific barracudas are voracious hunters, attacking swiftly and charging at prey. The barracuda uses acute eyesight to hunt and will usually move quickly toward light or sudden movement that might indicate the presence of prey. In murky water, it tends to attack an object even before identifying it.

No one knows the life span of Pacific barracuda, but it is estimated at 14 years.

Marinebio says although barracuda attacks on humans are rare, the fish are unpredictable. Evidence shows that the barracuda can be dangerous when provoked or when it notices erratic movement or bright and/or shiny colours.