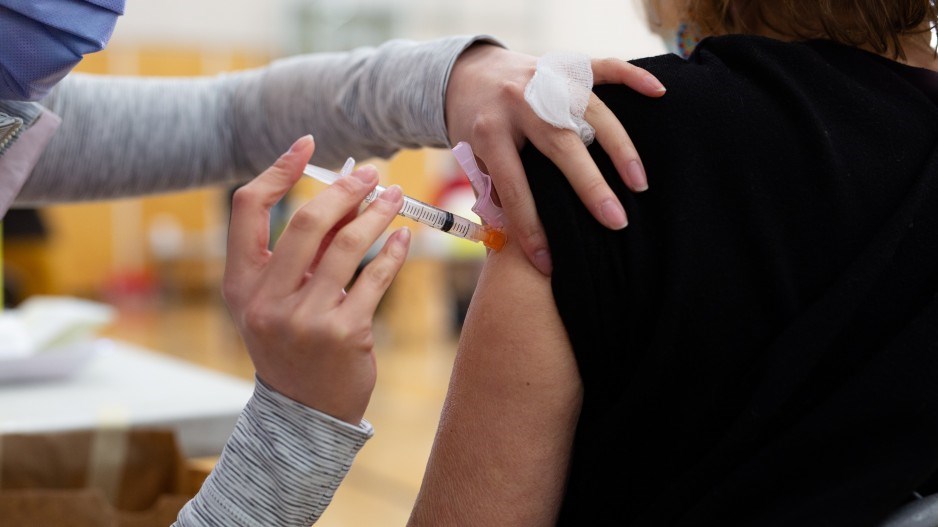 B.C.’s top doctor is urging patience from essential workers awaiting word if and when they will receive COVID-19 vaccinations outside of their age groups.

While B.C. is embarking on a vaccination program based primarily on descending age groups, officials revealed last week 322,000 frontline workers would jump past their age groups and receive doses of the AstraZeneca plc vaccine from the Serum Institute of India and the COVAX global sharing program.

“I know there are many, many people who feel they should be in that group of people but let me just say there’s a limited amount of vaccines and we have based it on a number of different principles including risk inclusion, including societal disruption and to protect and to prevent transmission in our communities,” Henry said during a Thursday briefing.

“As we have more vaccines, we’ll be expanding that program. But I will remind everybody that we also are moving ahead very quickly with our age-based program and very soon, within the next few months, those will converge and everybody will have vaccine available.”

Police, teacher, grocery store workers, child care staff, manufacturing workers, wholesale/warehousing workers, and those working at outbreak sites are among those being prioritized beginning — for the most part — in early April.

Henry said these workers will be contacted directly by public health if they are eligible to jump ahead of their age group.

“It does not in any way reflect the value or the central work that so, so many people have been doing across British Columbia since the pandemic started. It reflects, merely, the amount of vaccines that we have and where we can best target its use to try and minimize social disruption,” Henry said.

She said provincial officials are still awaiting word from the national operation centre for vaccine distribution for the number of doses to expect as the parallel program gets underway.

Earlier this week the province set about offering early vaccinations to 200,000 British Columbians considered to be extremely vulnerable to COVID-19.

Those include people with various forms of cancer, transplant recipients and those with severe respiratory conditions. They’ll be able to register for vaccinations beginning March 29 after receiving a letter in the mail.

Henry also urged patience amongst those who believe they are eligible but have not received a letter.

“It’s supplemental to the age-based program that we have and it’s based on risk,” she said.

“We all need to be patient. There will be vaccine for everybody.”

As of Thursday, only those born in 1946 or earlier are eligible to book their appointments.

Henry’s urgings for patience come after the province hit a record 28,037 vaccinations in one day over the preceding 24 hours.

So far, 520,459 British Columbians have received at least one dose of three vaccines approved for use in Canada. Within that group, 87,212 people have received two doses.

He said that while the province is ahead of schedule, B.C. is still nowhere close to achieving herd immunity.