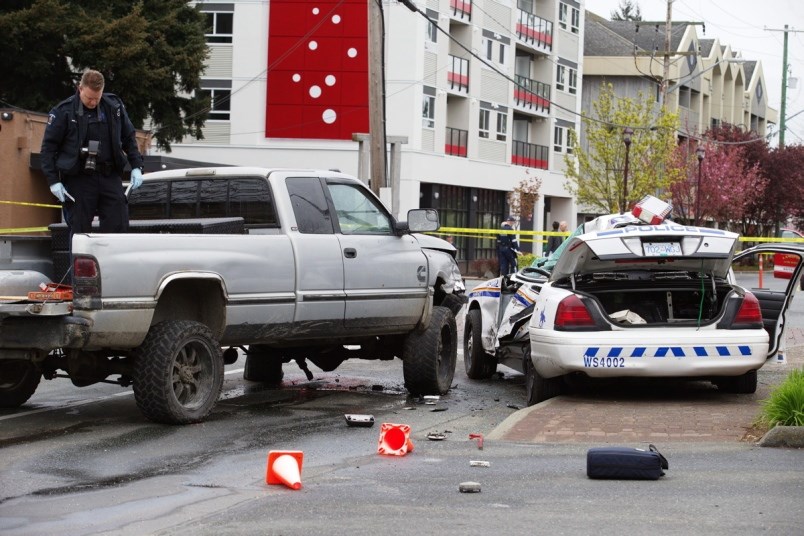 The Insurance Corporation of B.C. says it is “deeply sorry” for blaming West Shore RCMP Const. Sarah Beckett for the collision that took her life.

Beckett, a 32-year-old mother of five and two-year-old boys, was killed when her marked police car was struck broadside at Goldstream Avenue at Peatt Road at 3:27 a.m. on April 5, 2016.

In March 2018, the Attorney General of Canada launched a civil suit against Fenton, seeking special damages for the loss and damage to the 2009 Ford Crown Victoria police car Beckett was driving.

In its suit, the attorney general says Fenton’s negligence led to the fatal collision and severe damage to the police car.

ICBC’s response, however, filed on May 25, 2018, said the collision was caused by Beckett’s negligence. The insurance corporation charged that Beckett failed to keep a proper lookout, failed to see Fenton’s truck at a reasonable time and failed to drive her car in a careful and prudent manner, and that she operated the police car at an excessive rate of speed and failed to keep the car under control.

But on Friday, after news of its position became public, ICBC said that response to the civil claim was an error.

“Clearly, the decision to suggest Constable Beckett was liable for this collision in the initial legal documents was a mistake and we are taking immediate steps to fix this error. We will be instructing our counsel to amend that defence to admit the defendant is fully liable for this accident,” ICBC said in a statement.

Fenton was driving drunk when his 1996 Dodge pickup was spotted by an RCMP corporal as having no tail lights showing, according to a statement of facts agreed to by the defence and prosecution. The officer switched on his red-and-blue lights as he followed Fenton south on Peatt as it approached Goldstream.

When Fenton noticed the police lights in his rear-view mirror, he took his eyes off the intersection ahead, where the traffic light was showing red. He was doing between 76 and 90 kilometres an hour in a 50 km/h zone, braking only a split second before hitting Beckett’s eastbound car.

“Kenneth Fenton has been convicted in criminal court of impaired driving causing death as well as dangerous operation of a motor vehicle causing death. We are aware of the civil suit and the response filed by ICBC. On our end we remain deeply affected by the loss of our friend and respected colleague, Sarah. The timing of this story coming out so close to Christmas leaves myself and the membership of West Shore RCMP saddened.”

Beckett was the first female B.C. police officer to die on duty, and the first Vancouver Island officer killed while on duty since 1991.