Long-term forecast calls for 'colder and snowier' winter in B.C.

For B.C. and a large part of the Prairies, colder than normal temperatures with an abundance of snow for the ski areas are expected.

"An outstanding ski season is on the horizon."

As La Niña kicks into high gear in the late fall and early winter, the Weather Network predicts Western Canada will have an early to start this year's ski season.

For the winter season, the weather forecasting channel writes that "La Niña winters tend to be colder and snowier across Western Canada" and it looks like there will be that typical pattern again this winter. For B.C. and a large part of the Prairies, colder than normal temperatures with an abundance of snow for the ski areas are expected.

"Across the battle zone between the cold pattern across Western Canada and the warmer pattern across the southeastern U.S., we often see a very active storm track," notes the forecast.

"When that storm track stays to the north, weather systems usually bring rain to the region. But at times the storm track shifts to the south, and when that happens, we can often see a parade of winter storms with an abundance of snow and ice.

"This can even happen in a winter that is warmer than normal." 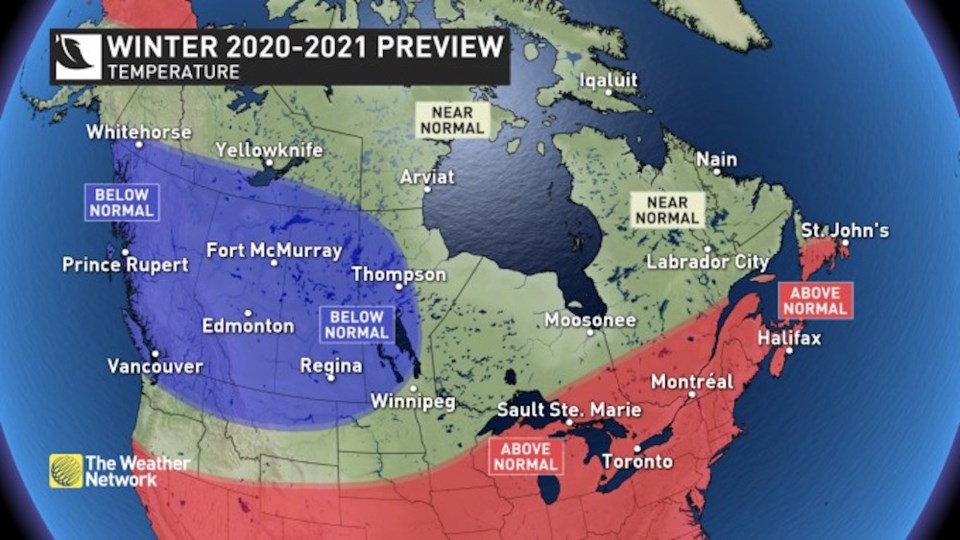 Right now, it is still too early to know exactly where that storm track will set up. It is also likely that it will vary in its position through the winter, notes The Weather Network.

Toward the end of November, the weather forecasting channel says it will "fine-tune the forecast and seek to get a better handle on where the dominant storm track will be."

Earlier this month, the U.S. National Oceanic and Atmospheric Administration's Climate Prediction Center officially issued a La Niña Advisory, replacing a watch that was implemented earlier in the year.

Vancouverites share videos of torrential downpour in the city (VIDEO)
Sep 24, 2020 10:55 AM
Comments