Man arrested after arrow shot into vehicle with family inside at B.C. intersection

And it happened during the father's last week of paternity leave before he returns to work as a physician at the hospital
Times Colonist May 7, 2020 9:26 AM

A Victoria family driving with their three-week-old infant and toddler are shaken after their vehicle was shot with an arrow.

Brianne and Kyle Winter, newborn Theo, and 3-and-a-half-year-old Quinn were stopped at Cook Street at Pandora Avenue about 11 a.m. Monday after a trip to the garden store when they heard a bang. They figured it must have been a rock hitting the SUV, Brianne Winter said.

When they returned to their Rockland home, Kyle opened the driver’s side door and saw that a 10-inch metal arrow had pierced the plastic skirting below the door.

“Kyle opened the door and there was this thing sticking out of the door,” Winter said. “Then it all became clear that that was the noise we heard and it was an arrow that shot into the car.”

The couple, whose third child was with his grandmother, was angry. Three-week-old Theo was sitting directly behind Kyle. 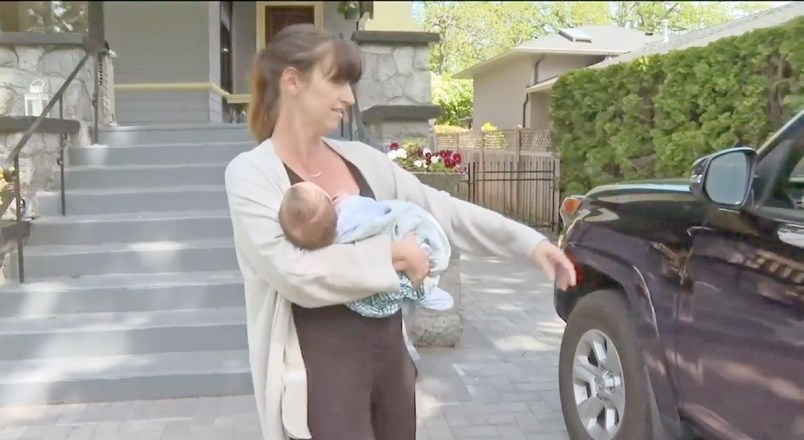 Brianne Winter and her son Theo. Winter was driving with her husband and two of her children when an arrow struck the vehicle just under the driver's door. Photograph By CHEK NEWS

They told officers they hadn’t seen the person who shot the arrow, so Winter was surprised when she learned an arrest had been made.

A man was arrested at a hotel in the 300 block of Gorge Road East on Tuesday after officers received a tip from the public, Victoria police said. He is facing charges of possession of a weapon for a dangerous purpose.

Winter said the family was hoping for a stress-free outing during her husband’s last week of paternity leave before he returns to work as a physician at Royal Jubilee Hospital. “To come home and have that happen, it’s just very upsetting,” she said.