Man rescued from rough B.C. waters after jumping from seawall 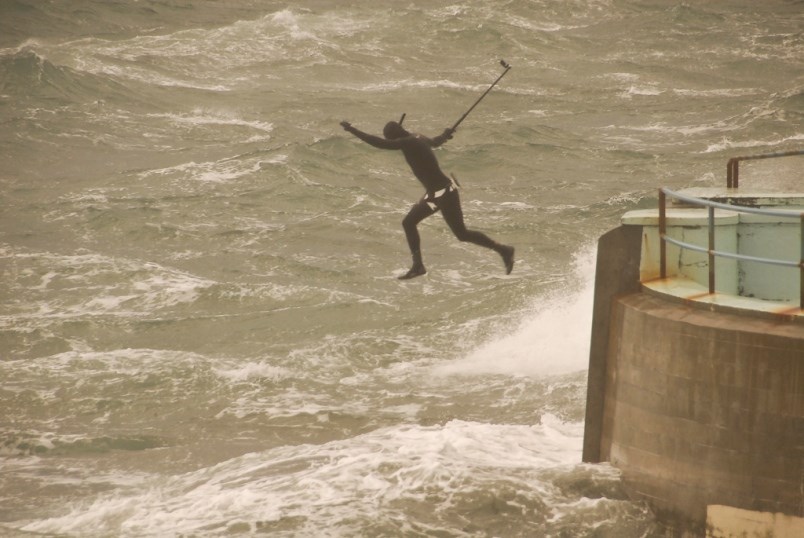 A man jumps from the seawall near Ogden Point on Sunday, Jan. 12, 2020. He had trouble getting out of the water and had to be rescued. Photo by Jonathan Fisher

A daring dip in the ocean turned dangerous Sunday when a man leapt from the Dallas Road seawall at Ogden Point in Victoria into the rough water below and was unable to get out.

The man was dressed in a wet suit and wearing a diving mask and snorkel, and what appears to be a weight belt used for scuba diving and freediving. He was also holding a GoPro camera, which he told police he was using to capture video footage of the large waves that were breaking over Dallas Road at the time.

Jonathan Fisher, who was taking photos from the seawall around 3:30 p.m., saw the man standing on stairs along the seawall at the end of San Jose Avenue.

“He was standing there for a good five minutes and then he jumped right in,” Fisher said.

The man appeared to be fine in the water, Fisher said, but he wasn’t able to get out on his own.

“It seemed he was having trouble because the surf was so high,” Fisher said. “The waves were absolutely bashing against the walls.”

Police were called and arrived to find passersby attempting to reach him with a line.

Officers, with the help of Victoria firefighters, paramedic and passersby, were able to get the man out of the water.

The man was taken to a waiting ambulance, but was not injured and declined further medical attention.

Police warned the man about the danger of entering the ocean during a storm.