For their first two years of dating, the lovebirds sailed with BC Ferries almost every weekend to see each other.
Jan 18, 2020 11:45 AM By: Elisia Seeber 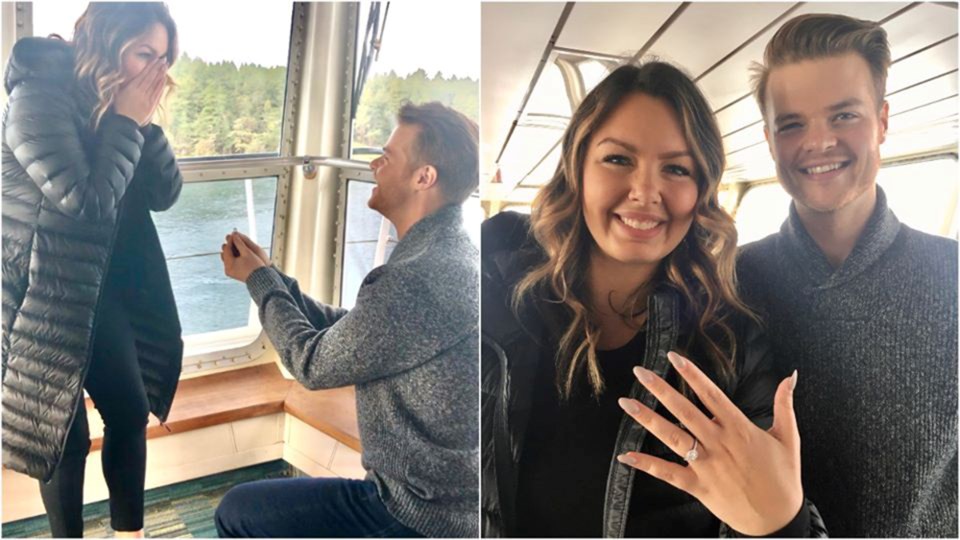 Jaydon Boughen proposed to Ashly Gait on a BC Ferries vessel. Photo: BC Ferries

A British Columbian couple is sailing into the next chapter of their lives together after a romantic marriage proposal took place aboard a BC Ferries vessel.

For two years the lovebirds sailed with BC Ferries almost every weekend to see each other, so it was only fitting for Jaydon Boughen to pop the big question to Ashly Gait while on the water.

The proposal took place on Dec. 20 on the Spirit of Vancouver Island, the Tsawwassen to Swartz Bay route, after a lot of planning and a few white lies.

Gait told Vancouver Is Awesome Boughen came up with a clever plan to keep her from finding out.

“He told me about a week before we were heading to the mainland for Christmas that he won free ferry passes and a bridge tour from putting his business card in a fishbowl at a chamber event (believable),” she said.

“He said to dress nicely because when he went to the BC Ferries office to ‘pick up the prize’, the lady said we would take some photos up there (also believable).

“Thank goodness for that because I definitely would have been in sweats!”

She said once they arrived on the ferry,  Boughen went to ask 'what time the tour was' but he was actually making sure the plan was in place.

“We got to go up on the bridge as the boat was going through Active Pass and it was absolutely stunning,” Gait said.

"Active Pass is halfway between the island and the mainland, where we both come from."

While the couple was up there they had a look around, met the captain and crew and Boughen got to honk the horn before the chief steward offered to take some photos.

And that’s when the big moment happened.

Jaydon Boughen got down on one knee and asked the love of his life, Ashly Gait, to marry him.

“The chief steward took my phone, turned it to video, and captured the whole thing!” Gait said.

“I was completely shocked and didn’t see it coming at all. I can’t believe the time he put into making it the best surprise ever and the best day of my life!”

Gait said having the proposal on the ferry was incredibly meaningful to the couple, who have been together for 2.5 years, because it's the first place they saw each other in Canada after meeting in Iceland.

“We basically lived on the ferries every other weekend for our two years of dating,” she said.

BC Ferries shared the happy news in a post on Facebook on Friday, Jan. 17. congratulating the couple.

“Jaydon and Ashly sailed with #BCFerries almost every weekend for two years to see each other and made amazing memories along the way,” the post said.

“He thought it was only right to propose to her in Active Pass which is the midpoint between their hometowns.”

“We're honoured to have played a small part of this amazing milestone.”

“Congrats to the newly engaged couple!”

The happy fiancé said the wedding was planned for August 29 at their favourite winery on Vancouver Island.