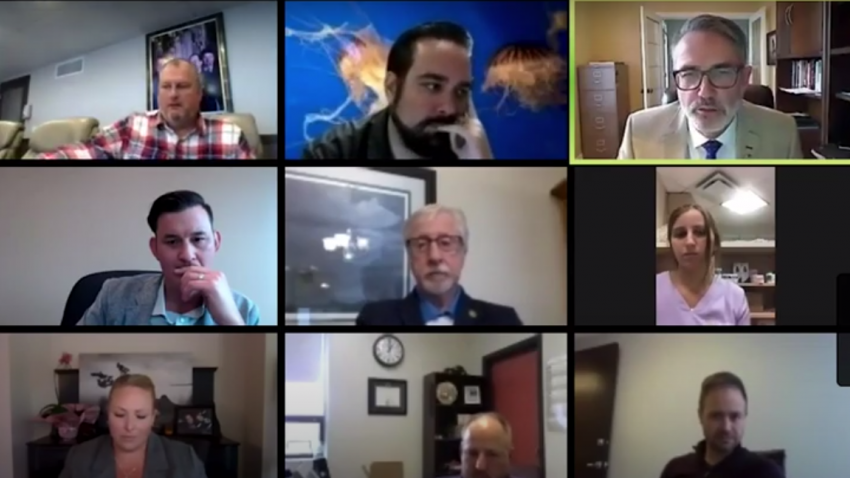 Throness (yellow border) made the comments in an Oct. 14 online constituency all-candidates forum

BC Liberal leader Andrew Wilkinson is down an incumbent candidate, following the resignation of Chilliwack-Kent MLA Laurie Throness.

“Yesterday Mr. Laurie Throness made statements that are not in keeping with the values of the BC Liberal Party, or my own values,” Wilkinson told media in Coquitlam this afternoon.

“Those statements about contraception were completely wrong. I therefore have accepted Laurie Throness’ resignation as a candidate for the BC Liberal Party.”

According to a statement from the party, Throness “accepted that his comments were wrong and inappropriate” and “it was clear that he couldn’t continue to be part of the BC Liberal team.”

Throness remains on the ballot and could still be elected as an MLA, for his third term. However he would not sit as a BC Liberal caucus member, should he choose to represent the riding. Glacier Media has reached out to Throness for comment.

Throness had compared the NDP’s proposal for free contraception to eugenics, the practice of selectively mating people with specific desirable genetic traits.

He made the comments in an Oct. 14 online constituency all-candidates forum.

Burnaby-Lougheed NDP candidate Katrina Chen had announced Oct. 11 the NDP would make prescription female contraception products free if re-elected. This proposal, she said, would cost about $60 million a year.

Chen said while condoms are relatively cheap or free and vasectomies are covered under MSP, women must currently bear the costs of contraception they need.

Of this proposal, Throness said, “It contains a whiff of the old eugenics thing where, you know, poor people shouldn't have babies. And so we can't force them to have contraception so we'll give it to them for free. And maybe they'll have fewer babies. So there will be fewer poor people in the future.

“And to me, that contains an odour that I don't like. And so I don't really support what the NDP is doing there.”

The riding has an independent candidate, city councillor Jason Lum, competing against the NDP, Green Party and a Libertarian candidate.

The provincial election is October 24 but many have already requested and cast their mail-in ballots due to the COVID-19 pandemic.