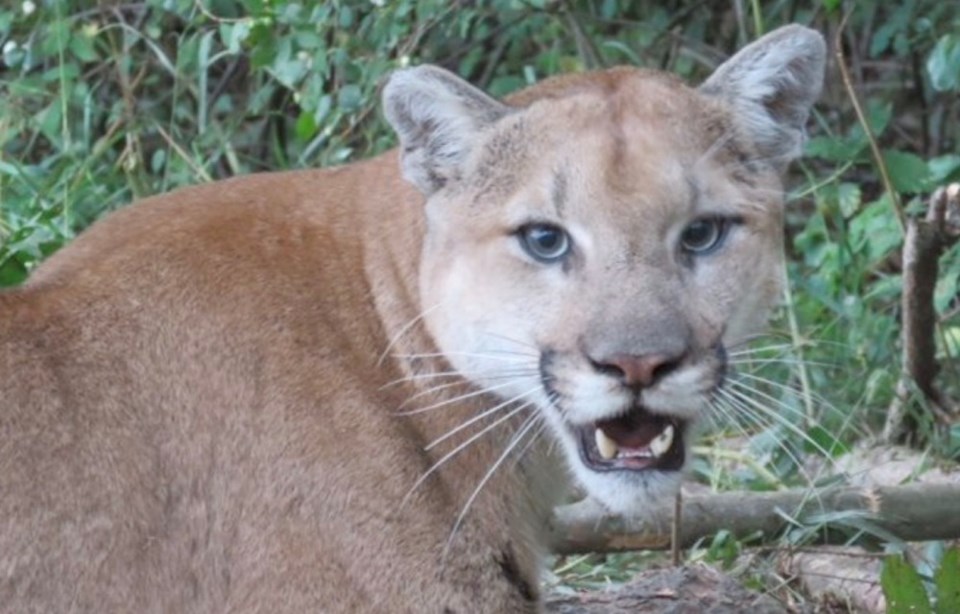 A file photo of a cougar. A Saanich woman had a close encounter at her Carman Street home, near Camosun College and Hillside mall, this week. PHOTO: B.C. MINISTRY OF ENVIRONMENT

Saanich, B.C. resident Lynn Wright was getting ready for bed on Wednesday night and closing her back door when she noticed what she thought was a dog stretched out on her back porch.

“I said: ‘How did you get back here … You’d better go home now … I’m not going to let you in,” says Wright, who was crouching down to speak to the animal. “I’m standing there [less than a metre away] thinking I’m talking with a yellow lab.

Wright had in fact had a very close encounter with a cougar at 10:30 p.m. that evening, likely the same big cat that had been reported on North Dairy Road in the Hillside Centre area the day before.

The back porch light of her Carman Street home wasn’t working, but there was enough light coming through the glass door for her to see the cougar’s face, large body and long tail as it slipped into the night.

Saanich police arrived within five minutes and scouted the area but found no sign.

Two hours later as she closed her bedroom curtains, she spotted the cougar again, lying under a bush in her front yard.

“It was really a shock,” Wright said in an interview Friday. “I was checking the glass [on the deck door] for a nose print because he was right there. I’ve seen cougars in the zoo and TV … not that close.”

The Carman Street Block Watch Association sent emails to residents warning them to be on the lookout for cougars.

Another Saanich resident, Edna Hilton, said she was awakened the same night in her Torquay Drive home by a strange sound coming from outside her bathroom window at 3 a.m.

“It was like a cat, an agitated cat, but coming from something much bigger,” said Hilton.

From her dining room she could see deer running by. She moved to her living room window and saw a cougar chasing the deer. “[The cougar] moved so fast,” she said.

There have been other cougar sightings this week in Saanich near Prospect Lake and Rithets Bog.

Rick Dekelver of the B.C. Conservation Officers Service said cougar sightings have been on the increase in urban areas, and it’s likely they are pursuing their ­natural prey, deer, as that ­population increases in residential neighbourhoods.

He said cougars are not scavengers and prefer to hunt for their food. They are most active from dusk to dawn and often lay low during the day, finding cover in bushes or trees. People may pass by them without even noticing.

But they will travel in daylight because they are curious by nature, sometimes cutting through yards. “If there is something that comes within their comfort zone, they will flee,” said Dekelver.

He said cougars might also try to grab pets such as cats and small dogs, so it’s important for residents to be watchful of their pets at all times, including those evening bathroom breaks outside.

Wright does not have any pets, but she does have water fountains in her back yard where the big cat might have stopped to rest and drink. One of her neighbours in the back along Service Street also has several cats that cut through her yard on a regular basis, and the cougar might have been watching for one to appear.

Dekelver said people should be vigilant in the evening hours. If they encounter a cougar, the first rule is never to run because it might consider you prey. “Back away slowly and speak in a loud voice,” he said.

“Don’t scream or have a shrill voice. It may think you are prey. Look big. If you have a jacket, pull it up with your arms. Pick up your child to make your silhouette bigger.

“It may have a kill that it is protecting.”

Dekelver said the presence of deer — or their sudden disappearance — is a good indicator of whether or not there is a cougar in the area.

“If you go from seeing six deer on a regular basis to nothing for a week or so, it could be a sign. [Deer] often know about cougars a lot sooner than [humans] do.”