The city still has the highest rent in Canada for a two-bedroom apartment.

A recent report finds that Vancouver has the second-highest average rent across Canada for one-bedroom apartments and the highest rent for two-bedrooms. However, rental prices did not increase this month over last.

At the start of its report, Padmapper.ca notes that the country's two most expensive markets, Toronto and Vancouver,  had relatively flat months in terms of rent price changes. That said, Toronto still has the highest rent for a one-bedroom apartment Canada-wide, costing $2,050 for October. It also has the second-highest rent for a two-bedroom, which costs $2,650.

Since this time last year, Vancouver one and two-bedroom rents have fallen 7.8% and 14.9%, respectively.

This month, Vancouver's market remained flat, with one-bedroom prices staying the same price as the previous month, or $2,000. The city still has the highest rent in Canada for a two-bedroom apartment, coming in at a staggering $2,750 for July. However, this price has also stayed flat.

"The rest of the top markets experienced a mixed bag of changes as Burnaby, the [third] most expensive city, saw rents down on all fronts, while Victoria, the next priciest market, saw rents grow into the double digits since this time last year," said Padmapper.ca.

"Aside from the [three] most expensive cities, the majority of Canadian cities had growing rents on a yearly basis."

Victoria is the country's fourth most expensive market. One-bedroom apartments increased 2.5% to $1,650, while two-bedrooms decreased 0.5% to $1,980. Notably, rents for both one and two-bedroom rentals are up over 13% since this time last year. 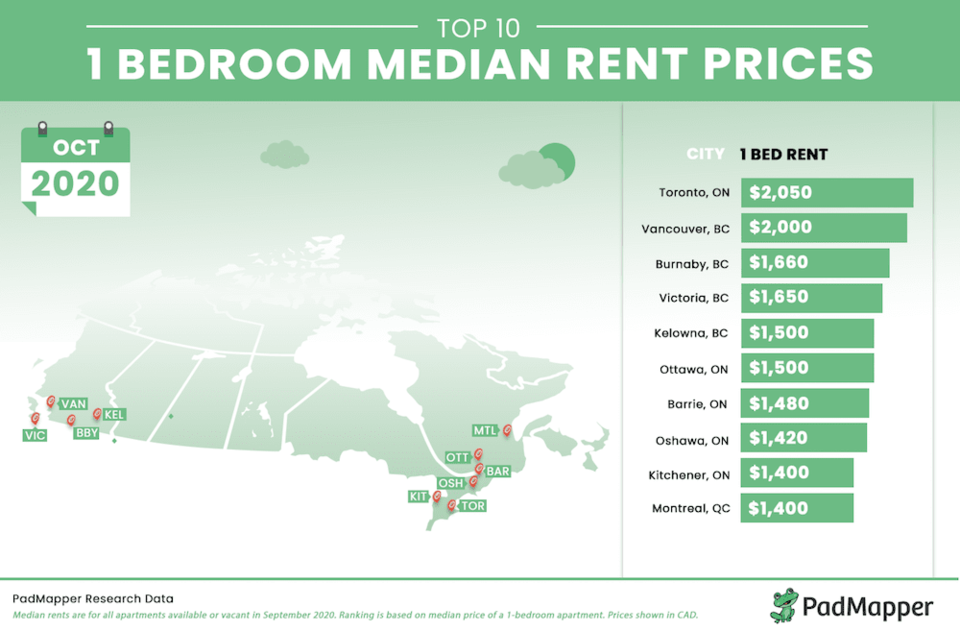