It's one thing to spot the big guy in red and his sleigh on Christmas, but how about Bigfoot, like these folks in one B.C. community say they did?
Jan 15, 2021 2:02 PM By: John Boivin, Local Journalism Initiative Reporter/Valley Voice 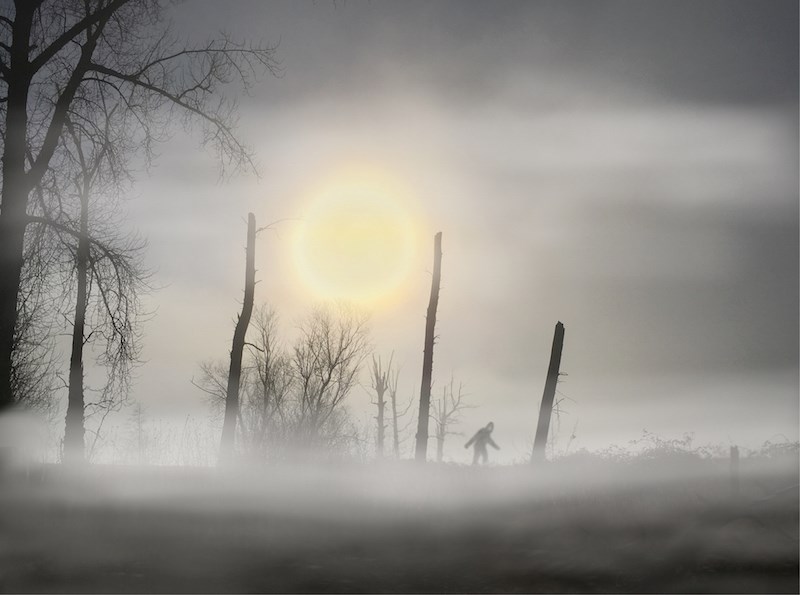 Sasquatch in the mist. Photo by Jarvell Jardey via iStock/Getty Images

Twas the night of Christmas

And through the West Koot

Not a creature was sighted

At least, that’s how the famous poem could go after a group of travellers spotted what they say might have been a Bigfoot – also known as a Sasquatch – near Silverton, B.C. on Christmas night.

The four friends were heading to their home on Hwy 6 just south of Silverton on the evening of December 25 when the people in the front of the vehicle saw what looked like a “huge, man-like figure” on the side of the road.

“I didn’t see the creature myself, I saw the prints,” says Erica Spink-D’Souza, who was in the back seat. She’s become the informal spokesperson for her companions. “But the person on the front seat cried out ‘Oh my gosh look at that!’”

“They said it looked like a huge grizzly, or it was a large man, standing up.”

But before Spink-D’Souza could catch a glimpse, the figure turned, went on all fours, and headed deep into the bush.

“We tried to turn around and look again, but it was gone,” she says.

After arriving home and putting her kids to bed, they returned to the scene to look for signs of the mysterious creature.

“We saw all these different tracks, and then we saw these tracks that were really alarming,” she recalls. “They were bipedal tracks in a straight line into the woods…

“I got a little spooked, it was alarming to see such big prints. But there were no bear tracks.”

Spink-D’Souza and the others examined and photographed the tracks, and then she filed a report with a Bigfoot organization online.

“The surrounding pristine snow proves the tracks were not fabricated by humans,” he says. “The stride length is beyond the ability of a human trying to leap through knee-deep snow. The drag marks and depth of the tracks prove they are not from a leaping rabbit. The linear pattern shows that it was not a bear.”

Moneymaker also says it’s unlikely someone was trying to hoax random travellers on an empty stretch of road on Christmas night.

Spink-D’Souza, who just recently moved to the area, says she’s never had something like this happen to her before – though she’s heard weird animal sounds howling in the bush around her new home.

She says locals she’s spoken to have generally accepted her claim.

‘Well, it’s the Kootenays,” she says, laughing. “I tell them what happened, and they start telling me their Bigfoot stories.

“People were saying ‘oh, that’s The Wanderer, there’s a sasquatch who wanders around here,’” she says. “It sounds like around here people are pretty open to the possibility there is one.”

The sighting was strong enough that members of an Okanagan Bigfoot group returned to the location about 10 days after the sighting.

But after investigating the scene and examining the tracks carefully, the team put a damper on the excitement.

“They suspect the tracks are from a very large moose,” says Moneymaker, who’s based in California. “The witnesses may have seen a large female moose facing forward and mistook it for a man-like figure.”

But since nearly two weeks had passed since the initial sighting, Moneymaker says there’s still room to believe.

“It’s up in the air,” he says. “In most cases I can usually say it’s looking more one way than the other, but in this case I can’t. I think there are moose tracks in the area, yes, but there are witnesses who said they did not see a moose.”

Moneymaker says he’d love someone with a drone to fly along the trail of the purported tracks to see where they lead.

Sasquatches are thought by some to be present in the West Kootenay. Paranormal researchers believe it could be a lost sub-species of hominid, like the extinct Gigantopithecus, a large ape-like creature whose remains have been found in southeast Asia. However, no convincing physical evidence has ever been found to support those claims.

For Spink-D’Souza, the incident has left her with a larger sense of the magic of the world.

“It leaves me with a sense of awe and wonderment on all the beautiful mysteries of this world,” she says, noting Indigenous cultures recognize the existence of the sasquatch.

“In terms of looking for evidence, in concrete ways, that’s fine, but I do hold a respect that there are people around who know of the existence of sasquatch and that’s marvellous.”

If you see a sasquatch, you’re invited to contact the Bigfoot Field Research Organization through their website.