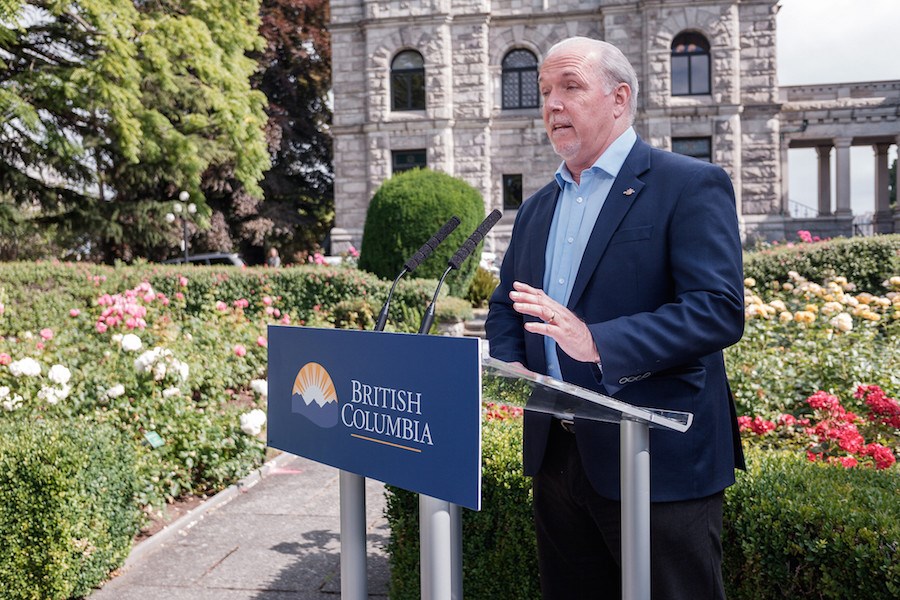 It's been a busy week - not to mention a busy year - for B.C. premier John Horgan, but the province's leader did find time to work in a couple of spot-on and light-hearted tweets amidst the news cycle on his social media feed.

Marking the third anniversary of being sworn in as Premier on July 18, Horgan's week went on to include voicing support for the Black mayor of an Interior town who stood up against racism, a worrisome spike in COVID-19 cases across the province, and a request for the feds to de-stigmatize addiction. He's also shared news about more childcare spaces opening up in the province, and some inspiring stories about B.C. residents.

On Thursday, Horgan held a press conference that kicked off with a stern "Uh-oh, Dad's mad"-style warning, directed at B.C. residents who were abandoning "common sense" in favour of large gatherings that could lead to COVID-19 infections.

"I have to say to British Columbians, come on, you're better than that," said Horgan.

While it was Horgan who said it, the Premier took to Twitter with the perfect GIF of B.C. ASL interpreter Nigel Howard (aka the star of V.I.A.'s "Listen to Nigel" posters) to wittily drive the point home.

"After seeing large gatherings in Kelowna and Vancouver in recent days, I think ASL interpreter Nigel Howard delivers the message best," tweeted Horgan, posting a GIF of Howard signing in his expressive style "Come on, you know better."

But it was a one-two punch kind of day for Horgan on social media, as B.C.'s top official took a jab at our neighbours to the south with a tweet directed at Washington state governor Jay Inslee about Seattle's newly-named NHL franchise, "Kraken."

Looks like Horgan is among the many eager for the Kraken to hit the ice (and the NHL to be able to play as usual in their home cities) and create a little cross-border rivalry.

Well played, this week, Premier Horgan. Can we get a retweet?