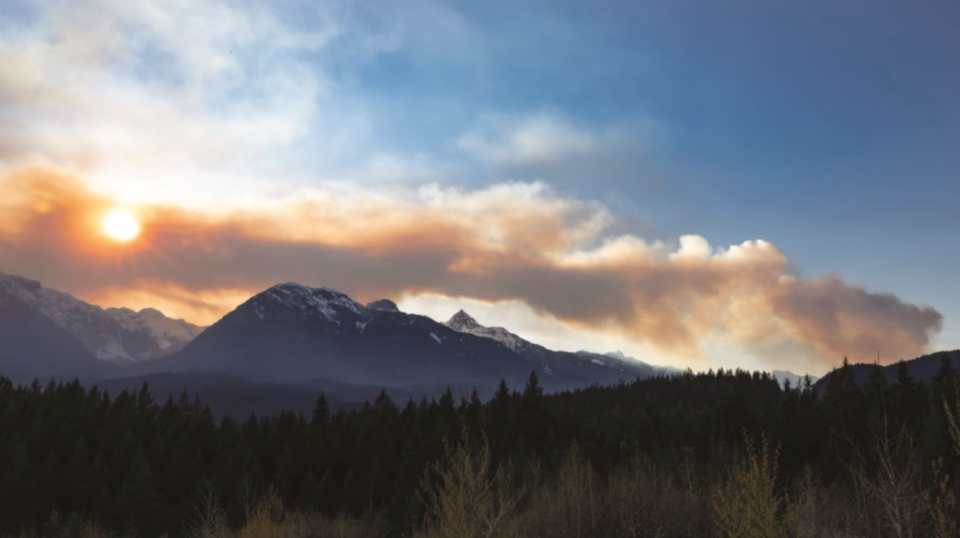 After a wet and cool spring, the public is reminded to stay vigilant on wildfires as high temperatures persist across B.C. Smoke from a wildfire in the Squamish Valley in late April is pictured. File photo by Robert Keir

It’s been a mercifully tame wildfire season to date, with fires in the Coastal Fire Centre well below the 10-year average—but with high temperatures persisting, that could soon change.

“We have dry conditions, we’re seeing fires starting now, and actually this weekend we were seeing them grow beyond spot sizes.

“We don’t have unlimited resources, so we really want to reduce any human-caused fires we can.”

The region’s fire hazard was greatly reduced by the rains of May and June, Simpson said, noting that hazards are always expected to increase in July and August.

But the relatively wet spring means more resources are available should activity pick up, Simpson said.

“What really stretches our resources is when we get a draw on resources provincially [earlier in the season],” he said.

“Right now we have good capacity for resources in our crews up north. They have very little fire activity, so should we get more fires down here, we’re going to be able to pull those resources down from up north as well.”

The Pemberton Fire Zone, which Simpson has worked out of for much of his 25-year career, is also benefiting from a new three-person response crew added in April (to go along with two, 20-person crews and three, three-person crews).

“Their primary objective is to get to the fires quickly and control them at the smallest size possible,” Simpson said, adding that the self-contained crews can travel by truck or helicopter, and have the equipment to stay on a fire for 24 hours.

“So we can fly them to a mountainside where a lightning strike has occurred, and they can use hand tools and chainsaws and assistance from a helicopter to hopefully suppress a fire at the smallest size possible.”

Further, Simpson’s position with BC Wildfire was transitioned last fall to more of a prevention focus, allowing him to get more in-depth with FireSmart initiatives and fuel management programs in the region.

“It gives us more horsepower; more time dedicated to prevention activities,” he said.

“There’s a lot to do, and that’s the focus of my work [now], where in the past I’ve had duties as far as basically helping run a 60-person firefighting base.”