‘I was scared:’ Richmond woman recalls her family’s time stuck in Peru under COVID-19 lockdown

Sabine Yep wept when she saw the Air Canada flight crew lined up outside the plane on the tarmac of an air force base in Lima, waving Canadian flags.
Mar 28, 2020 11:59 AM By: Kirsten Clarke 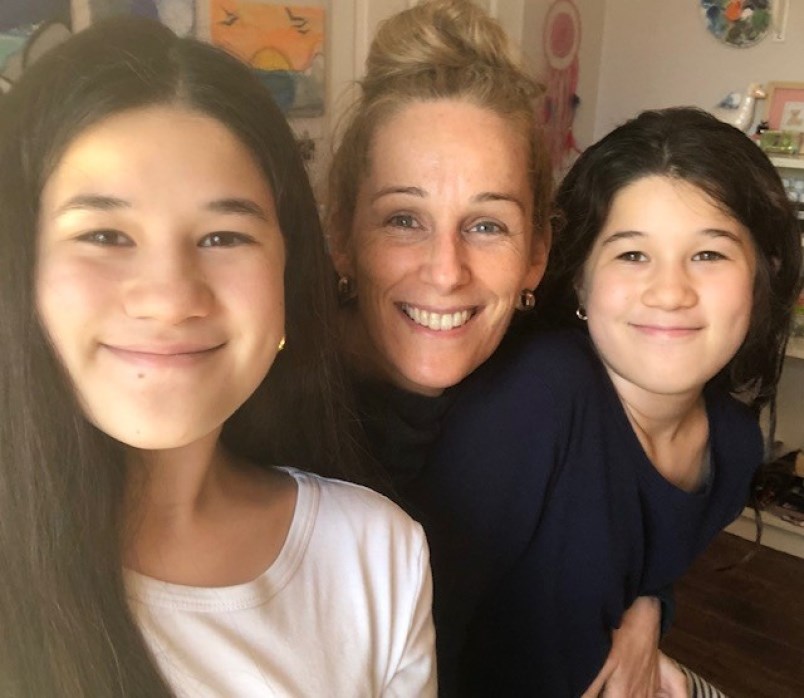 Sabine Yep, 47, and her two daughters, Lucia, 13 and Valentina,11. The Yeps, a family of four, were caught up in a country-wide COVID-19 lockdown in Peru, before travelling home on an emergency Air Canada flight. Photograph By SUBMITTED PHOTO

Sabine Yep wept when she saw the Air Canada flight crew lined up outside the plane on the tarmac of an air force base in Lima, waving Canadian flags.

“Once I saw the Air Canada plane and the stewardesses, with their flags waving and greeting (us), I started crying,” said Yep, 47, speaking to the Richmond News over the phone just hours after arriving home to Richmond Wednesday, Mar. 25 on the first emergency flight out of Peru.

“Once we were sitting inside (the plane), I thought, okay, we’re going home. Everybody was clapping,” said the long-time West Richmond Community Centre fitness instructor and personal trainer, who is now in self-isolation with her family.

Both Yep – who immigrated to Canada in 1989 – and her husband Arturo, 48, grew up in Peru. The couple wanted to take their daughters, Lucia, 13, and Valentina, 11, to Cusco to see Machu Picchu, visit family and experience the life and culture of the country they grew up in, said Yep.

But the trip didn’t go as planned. While there were no travel advisories preventing them from going when they left Richmond Mar. 11, said Yep, everything changed within a matter of hours – both in Canada and Peru.

“We flew via Toronto Wednesday (Mar. 11), and by the time we landed in Lima (the next day), everything had changed, literally, in those 24 hours,” said Yep.

On Mar. 11, the World Health Organization declared COVID-19 a pandemic. One day later – the day the Yeps arrived in Peru – B.C. advised against all non-essential travel outside of Canada.

While things were still “quite calm” in Lima when the family arrived there Thursday, Mar. 12, and there was no official announcement yet from the Peruvian government, she and her husband made the decision to cancel their trip to Cusco and stay in Lima “out of fear” after hearing news from Canada and not knowing how things would turn out, she said.

After hours on hold with Air Canada, Yep said they finally managed to connect with the airline at 4 a.m. Friday, Mar. 13 to switch their flights home from Mar. 28 to Mar. 20, the earliest available date. That same day, the federal government echoed the advice of B.C. and other provinces, urging Canadians to postpone or cancel any non-essential trips outside of the country.

The announcement from Peru came two days later, on Sunday, Mar. 15. The Yeps had travelled just over an hour south of Lima to the coast, to stay with family who had a beach house in a small, gated community there.

“There must have been 20 of us, sitting in front of the TV, and (the president of Peru) goes live on national television…in the middle of his speech he said, to try and prevent what is happening in Italy or Spain, effective immediately all borders, including international waters, are closed,” Yep recalled.

The family became four of more than 1,000 Canadians stranded in Peru as the country closed its borders in the wake of the coronavirus.

The Peruvian government gave people just 24 hours to make their way home to their primary residence, said Yep. After that, the country would be under a “zero tolerance” curfew from 8 p.m. to 5 a.m. each day.

Under lockdown in Lima

The family drove back to Lima that night, said Yep, so they wouldn’t get stuck at the beachside community if the highways were closed.

“We decided to just barricade ourselves, literally do a quarantine, in the apartment that we had been staying in in Lima,” she said.

The family remained in the apartment for the next nine days. Yep was the only one to travel outside, just once, after they arrived back in Lima that Sunday, to purchase enough groceries and supplies to last several days.

At the store, Yep said people were made to line up two metres apart. The military had to separate two people who were fighting over one spot, she said.

The atmosphere in the streets and stores of Lima became tense, she said.

Once back at the apartment, Yep said she and her husband were calling the Canadian embassy night and day to try to make arrangements to come home. The government, she said, was “amazing,” after she finally managed to get hold of someone in Ottawa, who advised her to keep her phone on her at all times in case of news.

“I feel that Canada definitely took care of us,” she said. “They reassured me every time that they were working on getting us home.”

But while the federal government helped arrange the emergency flight home, it didn’t help pay for it – unlike previous repatriation flights.

The tickets for the Air Canada flight cost more than $5,000, but Yep isn’t complaining.

“It was our decision to make our way down there. It wasn’t (Canada’s) decision. And we did bypass the fact that there is a virus in the world; we didn’t think it affected us,” she said.

“We made our way down there thinking nothing’s going to happen, and when things changed, it’s also not the Canadian government’s responsibility or problem that the Peruvian government decided, with no warning, to close the borders.”

The family chose to self-isolate in the seventh-floor, patio-less Lima apartment to make sure they were healthy and safe, and able to get on a plane when the time came, said Yep.

While she was out buying groceries on the day they returned to Lima from the beach house, Yep said she found a board game with wooden pieces, similar to Bingo, which reminded her of her childhood.

“When I saw it, I thought my girls would enjoy that. It was something we could do, the four of us together, to get our minds off (the situation),” she said.

Yep also bought llama stickers and a llama pen in the store for her daughters, with whom she collects llama-related trinkets, as well as paper so they could do arts and crafts. The family watched Netflix, and, “miraculously,” Yep said her husband brought his laptop so he was able to work and stay occupied.

“I became obsessed with everything we touched – we had to disinfect. I was scared,” she said, explaining she washed their clothes every day.

Yep said she also tried to make meals “that represented we were actually on vacation,” with the supplies she had bought the one time she went outside.

When they got the email saying they could get on the first flight, Yep said she jumped out of her chair. However, they only had a 45-minute window to book the tickets on Air Canada’s website using a special code – in a place where WiFi isn’t the most reliable.

“That 45 minutes was the most tense of my life,” said Yep.

She didn’t even text anyone that they had made it on the flight, because she was so anxious things might not work out.

The government also provided instructions for how to get to the flight. The family had to find a taxi driver who was permitted to drive that day, to take them to the Canadian embassy, which was “fully locked and heavily armed,” said Yep.

There the 400-plus Canadians set to board the flight were screened and health-checked, then instructed to get on private buses that took them to an air force base – the airports were closed – where the Air Canada plane was waiting.

“We arrived there, and once again there was the army and police, and we were all seated about two or three feet apart from each other in different chairs until we were all screened, and our baggage was checked,” said Yep.

Finally, they were taken to the plane, where the air crew was waiting on the stairways with Canadian flags.

The flight took off from Lima on Tuesday, Mar. 24, and arrived early Wednesday morning in Toronto.

Yep and her family are now at their home in Richmond, where they will be self-isolating for the next two weeks as required by the provincial and federal governments.

“I don’t need to be told twice that I’m going to be quarantining for 15 full days in my house with my family,” said Yep. “It’s our job, it’s our responsibility, and it’s the least we can do for what (the government) has done for us.”

Yep said having a backyard to venture out into is a “game-changer,” compared to the patio-less apartment they rented in Lima. There’s also their dog to play with.

She may also try doing virtual fitness classes for her friends and clients, and work out on her stationary bike.

“I’m going to find a routine, and look at the positives: I feel safe here, so there’s your difference right there. And for starters, I have about three days’ worth of laundry to do.”