It took Wild ARC's rehab team over an hour to carefully separate the squirrels’ tails without injuring them further
Oct 21, 2020 5:12 PM By: Elana Shepert 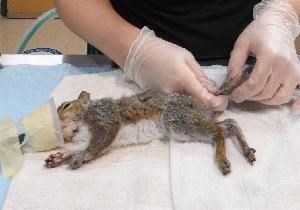 The BC SPCA says a group of juvenile Eastern Grey squirrels are recovering after their tails were stuck together in sticky sap and they were unable to free themselves.

Luckily, a good Samaritan found the five siblings stuck on the ground and contacted Wild ARC. One of Wild ARC’s volunteers was nearby and came to the bushy rodents’ rescue by carefully cutting them free from the grass.

It took Wild ARC's rehab team over an hour to carefully separate the squirrels’ tails without injuring them further--they had likely been stuck together overnight and had tried chewing themselves free.

Sadly, one of the tiny creatures, "had injuries that would not have healed, and was humanely euthanized to prevent further suffering."

The other squirrels had extensive damage to their tails; blood flow was severely affected, and their tails would become necrotic if they were not amputated. After the assessment, the animals were put on specialized care for a few days to ensure they were stable and healthy enough to undergo surgery.

Surgery for three of the squirrels went well, but a fourth squirrel had complications. However, the SPCA is optimistic that it will recover soon.

"Before surgery, our senior rehab team worked closely with a wildlife veterinarian to confirm the squirrels would be able to live full lives without a portion of their tails. After long discussions and further research, evidence suggests that this was in fact possible. While squirrels use their tails to help balance themselves, they can adapt well to compensate for the loss of their tails when necessary," the SPCA explains.

The outdoor enclosure will also provide a safe space for the young animals to learn how to move, climb and navigate their surroundings in a slightly different way than they are used to.

Once they are ready to thrive in the wild on their own, these squirrels will be released.

Now, the adorable squirrels will require food, medical supplies, medicine, enclosure upkeep, and enrichment during their recovery, which can be very expensive, adds the SPCA.

Find out more about the campaign to help support the squirrels' rehabilitation, HERE.