The student has filed a civil lawsuit alleging she was assaulted by the RCMP officer that came to check on her
Jun 23, 2020 7:31 AM By: Castanet 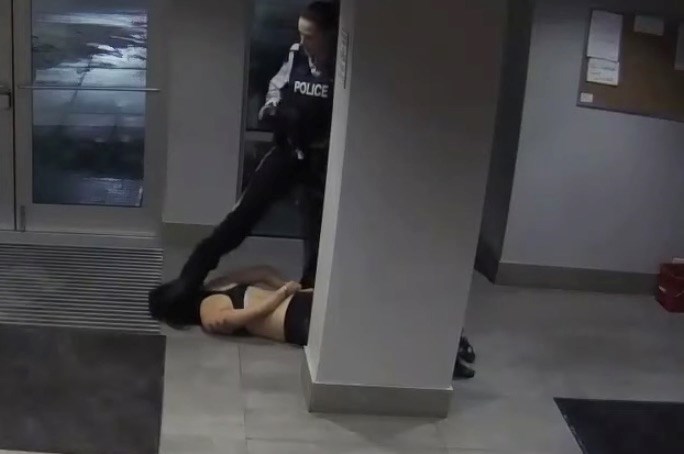 Disturbing new video footage of the aftermath of a RCMP wellness check on a UBCO nursing student earlier this year has been made public through a civil lawsuit.

Mona Wang filed a lawsuit naming Const. Lacey Browning, the B.C. Ministry of Public Safety and Attorney General of Canada in March 2020 over allegations she was assaulted on Jan. 20 by the RCMP officer that came to check on her after her boyfriend contacted police and requested a health check.

This week Wang's lawyer, Michael Patterson, released surveillance footage of his client being dragged down the carpet hallway of her apartment building on her face. Later, in the lobby of the building, Const. Browning is seen pushing the student’s head into the ground with the bottom of her foot and picking her head up by her hair.

The video does not show what occurred inside Wang's suite, but the civil lawsuit filed in March and a response filed to it last week offers two versions of events.

The lawsuit alleges Const. Browning entered the apartment and found the woman lying on the bathroom floor in a state of semi-consciousness.

“The plaintiff was not a danger to Browning, nor did the plaintiff act in a manner that would cause Browning to be in fear for her safety,” the suit says.

The claim alleges Const. Browning failed to introduce herself as RCMP and did not make any attempt to assess the student’s need for medical attention, instead ordering her to stand.

“The plaintiff could not stand on her own, and therefore, the plaintiff did not respond to Browning’s commands,” the suit says.

The claim alleges Browning stepped on the student's arm and kicked her in the stomach while she was down, assaulting her while shouting “stop being dramatic” and “control your [expletive] dog, don’t make me hurt him.”

Wang was then cuffed and dragged from the apartment, resulting in injuries, the suit says.

In a response to the lawsuit filed last week, the defendants said Const. Browning was called to an apartment building on Academy Way near UBCO after the plaintiff became unresponsive to text messages.

The response says Const. Browning “knocked multiple times” at the student’s door and got no response. When the officer stepped away to get help from the building manager in entering the apartment, Browning heard the door lock at the plaintiff’s residence “turn.”

“The defendant Browning then opened the door to the plaintiff residence and again announced herself in a loud voice as a police officer, asking the plaintiff to come out,” the response says. “There was no response.”

Browning claims she found the student lying on the floor of the bathroom motionless but breathing and showing evidence of self harm. When the officer removed an edged weapon from the woman’s unconscious arm, Wang's dog attacked her, leading her to place the dog in another room.

There were acetaminophen and melatonin pill bottles nearby and an open red wine bottle, claimed the defendants, "It was evident to the defendant Browning from the size of the bottles that a significant number of the pills were unaccounted for."

In order to determine the student’s “true level of consciousness,” Const. Browning says she performed a sternum rub, causing Wang to open her eyes and start yelling.

In the court filing, Browning claims she told Wang she was being apprehended under the Mental Health Act, leading the student to resist and flail her arms and swing them at the officer while cursing violently.

The government and RCMP response says Wang “opted to cooperate” once at the entrance of the building, offering no explanation for the officer’s actions captured in the surveillance video that showed her pushing the students head to the ground with her foot and picking her head up by her hair.

The response to the civil lawsuit claims “the investigation, arrest and brief detention of the plaintiff were reasonable, lawful and executed in good faith," adding the student ignored instructions of the officer and "resisted lawful arrest."

None of the claims have been proven in court.

The RCMP says it will be responding to the surveillance footage officially through the civil proceedings.

“We are committed to reviewing the materials and the allegations as it relates to the police officers actions to determine what other steps need to be taken,” said S/Sgt. Janelle Shoihet.