Brigitte Beurmann's husband lives under lockdown in a retirement home. As his dementia progresses, she's worried they won't get a chance to meet face-to-face again before he forgets her altogether.
May 23, 2020 3:21 PM By: Stefan Labbé 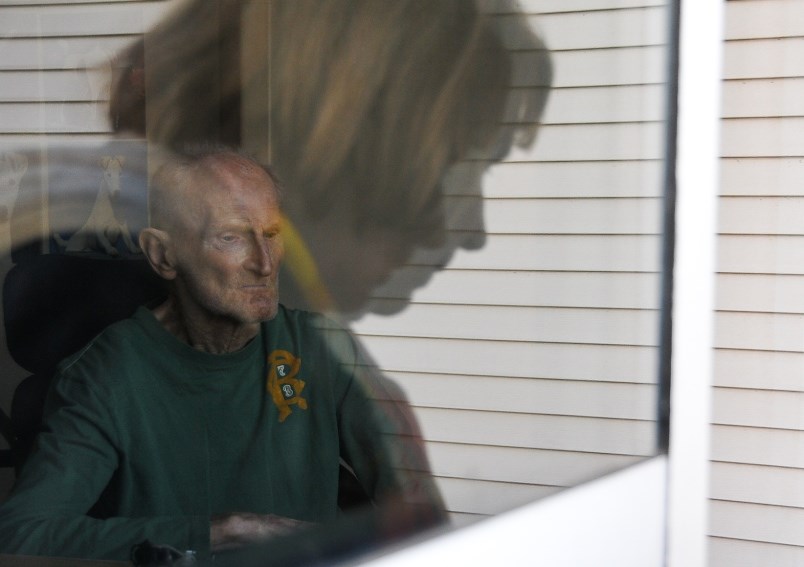 Brigitte Beurmann waves to her husband Bernie, who suffers from vascular dementia and lives under lockdown at a long-term care home in Port Coquitlam. Brigitte has visited Bernie every day since the pandemic lockdown began, and worries that by the time the measures are lifted, he won't recognize her at all. PHOTO BY STEFAN LABBÉ/THE TRI-CITY NEWS

Every afternoon, Brigitte Buermann dresses up, does her hair and ambles down the sidewalk towards the Hawthorne Seniors Care facility where her husband, Bernie, has been on lockdown for over two months.

No matter the weather, the 80-year-old will make the trip, parking herself in front of her husband’s window with a black milk crate and her dog. Buermann has pinned hearts across the window and, next to her, a helium-filled balloon with “Happy Anniversary!” scrawled across its face flaps in the wind.

“I’m just frustrated. We don’t have much time left,” said Beurmann, separated from her husband by a pane of glass that can’t open.

“I’m afraid he’s going to get to the point where he doesn’t know me anymore.”

Buermann lives five minutes away in a condo she strategically picked out to stay close to her husband of 61 years, even after his mind began to deteriorate.

Since the COVID-19 pandemic began, the Hawthorne facility was one of hundreds of seniors homes across the province that have gone into lockdown to keep the coronavirus out. Amidst public health orders, families, and their connections with their loved ones, have become collateral damage in the fight against the spread of the contagion.

Now separated by a virus that has wrapped around the globe, Buermann has built her daily routine around the three o’clock visits.

“I try to get dressed up, look the best at my age — not that he cares,” said Buermann with a laugh, noting her husband always liked her without make-up, “au naturel” as she put it.

Bernie had spent years as a machinist, and fixing things with his hands carried into the home, where he kept and worked on several motorcycles.

“I’d call him ‘Mr Fix-it.’ He fixed everything. He wasn’t perfect. But I can be a pain in the neck too,” said Buermann.

Two years ago, he wasn’t feeling well and so with his wife went to Eagle Ridge Hospital in Port Moody for a checkup. He was soon diagnosed with vascular dementia.

Bernie’s mind began to slip away as he waited months for a spot in a care home. Finally, after five months and endless advocating from Buermann’s daughter, Beverly, they found a spot for Bernie at Hawthorne.

In the first year and a half, Buermann used to bring him non-alcoholic beers, German sausages, and his favourite, bananas.

But that was before the COVID-19 pandemic, before every care home in the province went into lockdown. Buermann has had no physical contact with her husband for over two months now, and has only been able to read the signs of confusion etched on her husband’s face as he silently deteriorated on the other side of a window.

Bernie’s deterioration has been swift and it’s unclear if he’ll recognize his wife and children the next time they meet without any barriers between them.

Even as British Columbia moves into the Phase 2 re-opening of the economy, care homes remain on lockdown. In an interview with reporters this week, Fraser Health’s top doctor, Dr. Martin Lavoie, noted that to some extent, COVID-19 is still spreading within the community, a fact evidenced by the announcement of another outbreak at a Mission assisted-living facility Thursday, May 21.

The only exception, according to Lavoie, is if residents are on the brink of death, at which point a close family member will be given personal protective equipment and allowed in under strict protocols to say one last goodbye.

When asked by the Tri-City News when restrictions will be eased and accommodations made for families to reconnect with their loved ones, Lavoie said Fraser Health would be exploring options as the province moves into the summer months.

But that timeline is far from clear, and people like the Buermann’s are not the only ones desperate see family.

“We understand this is a very difficult situation [but] put a mask on us, take our temperature, let us meet them for an hour outside and apart,” said Buermann.