Transparency is top priority for Surrey’s police force: board boss

Still unclear when Surrey Police Service will be completed and what the transition and ongoing operations will cost.
Feb 22, 2021 3:54 PM By: Graeme Wood 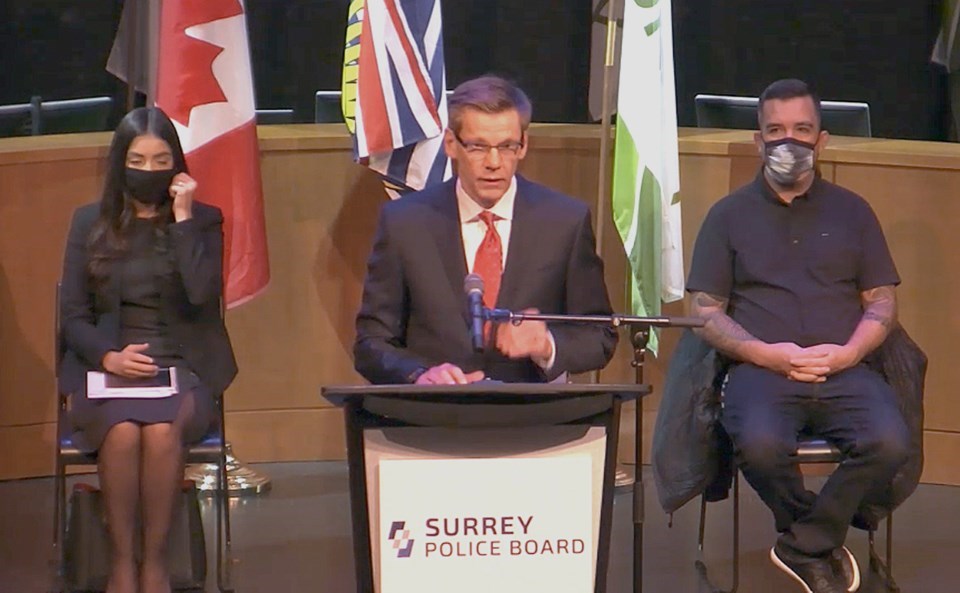 Norm Lipinski, shown answering questions at a press conference, says the time frame for the policing transfer in Surrey has not yet been worked outSubmitted
Amid criticism that Canada’s largest police force transition is taking place largely out of view of the public, the Surrey Police Board heard from the head of the Canadian Association of Police Governance that transparency and maintaining robust public records are fundamental for the “front and centre” issues facing law enforcement today.

Micki Ruth, president of the association, told the board at its second meeting of 2021 on February 17 that transparent governance would be central in addressing present-day “big hitters,” such as reviewing police funding over systemic racism concerns, use of force and deployment of technology, such as body cameras.

Ruth, whose group represents member Canadian police boards, advised Surrey’s board members that they, by way of the public, are the ones in charge of a unique opportunity to start fresh and prevent existing problems in policing from becoming established in the proposed municipal Surrey Police Service (SPS).

“Setting policies and looking at programs is absolutely the most important thing you can do,” said Ruth.

B.C.’s Ministry of Public Safety and Solicitor General, which has oversight of the transition, has an ongoing review of the B.C. Police Act; and it is also seeking to hire an outside consultant to train police boards. Surrey’s board was established last summer by the ministry and is now directly overseeing the nascent SPS.

Ruth said systemic racism, body cameras and de-escalation tactics are top of mind in Canada, citing the death of George Floyd in Minneapolis on May 25, 2020, which sparked protests.

The board has yet to discuss any substantial policies in public.

SPS chief Norm Lipinski updated the board last Wednesday on several matters, including an SPS access request to the Canadian Police Information Centre and its approved application to connect to the National Police Information Service.

Lipinski also spoke to the transfer process for civilian (City of Surrey) staff from Surrey RCMP to SPS when the transition occurs.

Director Elizabeth Model asked Lipinski about a timeframe for the transition. Lipinski said, “We’re just putting the plan together and it will be in phases.”

The city had budgeted a $45 million cut to Surrey RCMP operations in 2021, in order to fund policing operations by SPS. The budget suggested a seamless transition, with no added operational costs.

One of five guiding principles for the transition is that “the costs of transferring civilian staff will need to be managed to avoid duplication and to be cost-effective.”

Lipinski said two of 302 full-time RCMP civilian staff members will move over to SPS in the next month to assist the two hired deputy chiefs (one more will be hired soon, said Lipinski).

Model presented the board with 2020 expenditures showing SPS has spent $4.6 million of a budgeted $25.2 million, due to the transition being behind schedule.

The board was also briefed by the Surrey Vulnerable Women and Girls (SVWG) organization and Lipinski presented a plan to establish a Surrey Police Foundation.

On Monday Lipinski issued a statement on his first 60 days at SPS. He said he was “actively working with all three levels of government and police partners in developing a Deployment Model for the transitional period from RCMP to Surrey Police Service operations.”

“There are a significant number of moving parts and many mechanics to navigate, not the least of which is engaging the community and providing updates and accurate information on the establishment of your Surrey Police Service,” he stated.

Despite the challenges, board chair and Surrey mayor Doug McCallum said SPS police cars will be patrolling the streets “before summer.”

The public has heard from the RCMP union and four of nine Surrey council members that the transition has been conducted largely behind closed doors. A key related issue is unknown costs. The National Police Federation union has warned recruitment will be a significant issue for the new force as most existing Surrey RCMP members intend to remain with the federal agency.

Wednesday’s board meeting lasted close to one hour, whereas the last one lasted just 11 minutes. Meetings are viewable online at SurreyPoliceBoard.ca. The next meeting is April 20.

‘The fix was in’: Hiring process for Surrey municipal police chief raises concerns
Nov 25, 2020 11:56 AM
Comments