The Cowichan Valley couple and their pilot, also from Vancouver Island, were returning to B.C. from California
Dec 16, 2019 2:12 PM By: Times Colonist 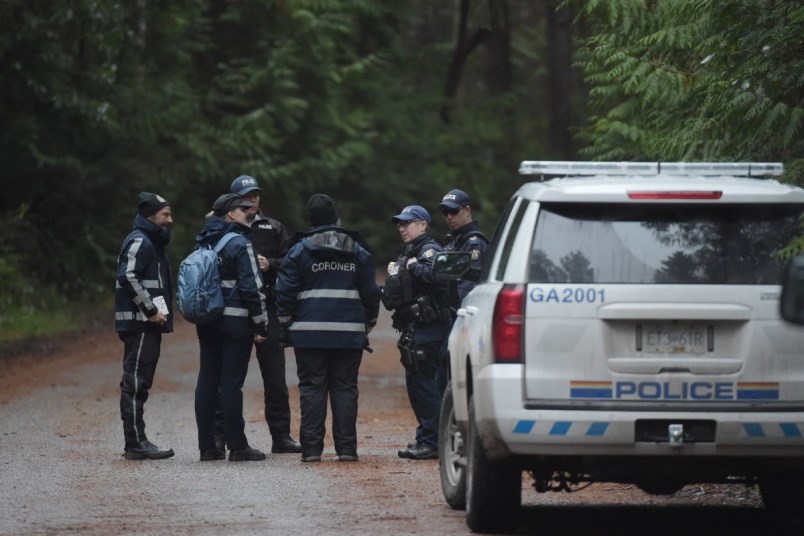 RCMP officers and members from the coroner's office walk into the dense woods near the scene of a small plane crash on Gabriola Island on Wednesday, Dec. 11, 2019. Photo by JONATHAN HAYWARD/THE CANADIAN PRESS

Cowichan Valley residents Allan and Katheryn Boudreau have been identified as the couple killed when a plane crashed on Gabriola Island last week.

The Boudreaus’ children contacted the Gabriola Sounder on the weekend to identify their parents as the passengers in the fatal Dec. 10 crash. Both Allan and Katheryn were 53.

Pilot Alex Bahlsen of Mill Bay was also killed in the crash.

The Boudreaus’ adult children — Jeffrey, 28, of Lake Louise, Alta., Bridget, 25, of Kelowna, and Rae, 23, of Victoria — could not immediately be reached for further comment.

They told the Sounder that their parents had been in Mexico and that their father was friends with 62-year-old Bahlsen, the pilot and registered owner of the 1982 Piper Aerostar that crashed.

After a stop in California, they were headed to Nanaimo. Witnesses have said the plane appeared to be in trouble and entered a spiral, crashing into the ground on Gabriola Island.

The Transportation Safety Board has said the pilot reported an equipment problem as he tried to land in Nanaimo, at the end of a trip from Bishop, California.

The Boudreaus owned Island Hothouse, a two-acre hothouse in Saltair that supplied Vancouver Island with sweet bell peppers, until they retired in 2018.

Their children said they taught them “to be selfless, compassionate giving people, and to treat everyone with love and respect.”

They remembered their mom as a caring and devoted family person who loved art. Their father, they said, was smart and always busy, greeting the morning by saying: “It’s a brand new day.” He loved to spend time with his children, fly, dirt bike, and take on any challenge.

Bahlsen, a flight instructor, was helping to prepare Allan Boudreau for his commercial pilot’s licence, according to the children, who said their father was close to his goal before he died.