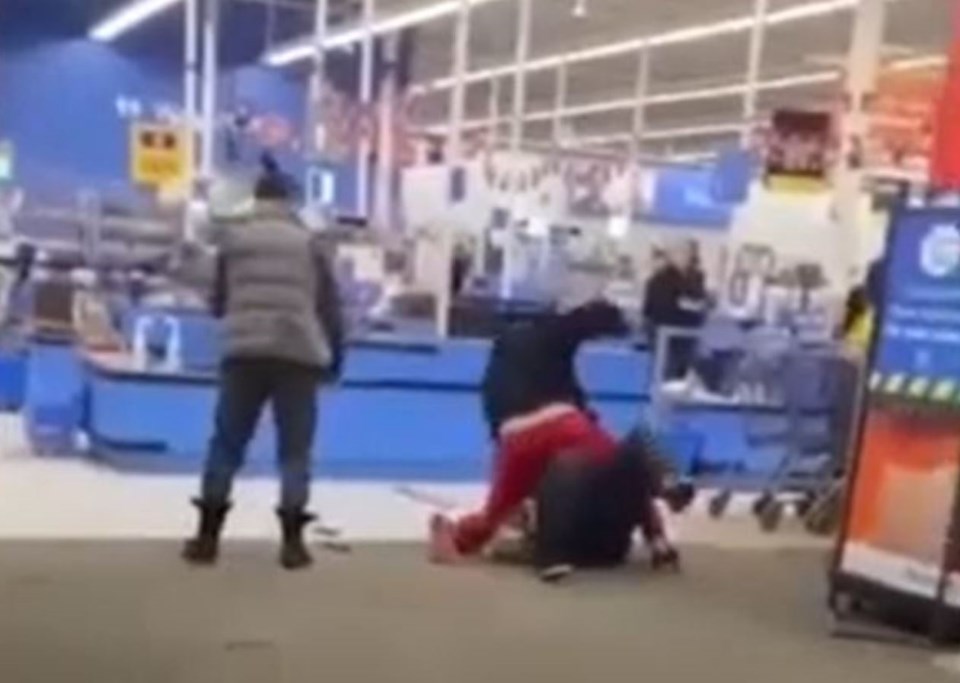 Dawson Creek RCMP says a man allegedly beat up a Walmart employee after being asked to wear his face mask. (via Screenshot)

Warning: The video below contains violence and extreme profanity.

Charges have been forwarded to crown authorities after a man allegedly assaulted a Walmart employee in northern B.C. over the province's new mandatory mask policy.

Dawson Creek RCMP S/Sgt. Damon Werrell says, in a release, that police were sent to the local Walmart at roughly 7 p.m. Wednesday night (Nov. 25) after receiving reports of an assault in progress.

When officers arrived, they were told that a customer had allegedly assaulted an employee after being asked to wear a face mask under the new orders issued by Dr. Bonnie Henry and government officials.

Werrell says police reviewed video surveillance and identified the man who was found at his home shortly after.

A 30-year-old man was arrested for assault and mischief, but was released to attend court at a later date.

The police statment also says charges have been forwarded to the BC Prosecution Service.

When contacted by PrinceGeorgeMatters regarding posts on social media that allege the involved employee had been physical with the man's girlfriend, Werrell said the investigation is under investigation and any decision on charges will be made by the B.C. Prosecution Service.

DC RCMP arrested a man after he assaulted an employee when asked to wear his mask.

Face masks are mandatory in all public spaces under the current PHO. Contraventions may result in a fine of $230.

"Dawson Creek RCMP would like to remind the public that face masks are required in all indoor public spaces, which includes most business establishments in the Peace Region," the release adds.

"While individuals may make a personal decision to not wear a face mask they must then not attend indoor public spaces.

"RCMP have a responsibility to enforce the face mask Provincial Health Order under the Emergency Program Act. Individuals whom refuse to wear a mask, exhibit abusive or belligerent behavior, or fail to comply with patron conditions or requirements may be fined up to an amount of $230.

In a separate statement to PrinceGeorgeMatters, Walmart Canada says the incident was completely unacceptable and deeply troubling.

"Last night, one of our associates asked a customer to wear a mask in our store. Masks save lives, are required by government order in British Columbia, and are mandatory in all Walmart stores across the country.

"Instead of complying, the customer attacked and assaulted our associate. This incident is completely unacceptable and deeply troubling. Our associates are doing everything they can to support our communities during this pandemic. You can be sure that Walmart will support our associate.

"At the same time, we will cooperate fully with the police investigation to ensure the perpetrator is held accountable for this crime. We would like to thank the Dawson Creek RCMP for their quick response last night.

"We know this behaviour does not reflect our customers in Dawson Creek and they will join with us in condemning this assault. Our thoughts are with our associate as he recovers from his injuries."

B.C. south coast still under snowfall warnings despite many waking up to rain
Jan 24, 2021 10:46 AM
Comments