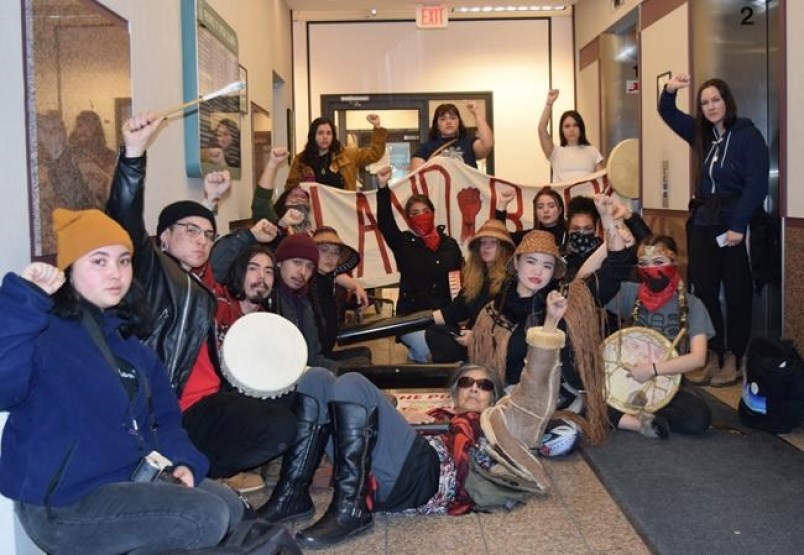 Indigenous young people occupy the B.C. Energy and Mines Ministry office in Victoria on Jan. 21, 2020, in solidarity with Wet'suwet'en hereditary chiefs who have opposed the Coastal GasLink pipeline in northern B.C. The occupation ended with arrests by Victoria police. THE CANADIAN PRESS/HO-Ta'Kaiya Blaney

Demonstrators in Victoria are promising to shut down all provincial government offices in that city on Friday as a show of solidarity with opponents of the Coastal GasLink pipeline project being built across traditional territories of the Wet’suwet’en First Nation in northwestern British Columbia.

A social media post says the shutdown is being planned for between 8 a.m. and noon.

It calls on “settlers” and union members to “take responsibility for the colonial institutions causing violence against Wet’suwet’en people.”

B.C. Solicitor General Mike Farnworth said public servants are prepared to expect the protests, but abuse of workers will not be tolerated.

He said there will be consequences if people engage in activities outside the law and he expects that will be enforced by police.

The B.C. Government and Service Employees’ Union issued a statement saying that it is not affiliated with the organizers and the union is not participating in the planned protests.

“The BCGEU's top priority [Friday], as always, is our members who work every day to provide vital public services to British Columbians. We are working with our members and their employer — the government — to make sure everyone is safe and secure no matter what happens with the protests.”

“Our primary duty is public safety. Our goal is to keep everyone safe,” says a statement from the department. “During protest incidents officers work to continuously balance the right to safe, peaceful, lawful protest with our duty to protect the public.”

Indigenous youth occupied a B.C. government Energy and Mines Ministry office in late January. That protest ended with the arrest of 13 people by Victoria police.

On Tuesday, hundreds of people surrounded the B.C. legislature, preventing access to the building and forcing cancellation of some of the ceremonial events leading up to the reading of the throne speech.

That demonstration and other protests across Canada are in response to RCMP enforcement of a court injunction last week against Wet’suwet’en hereditary chiefs and their supporters, who had been blocking construction of the pipeline.

With files from The Canadian Press