A look at B.C.'s wildfire history 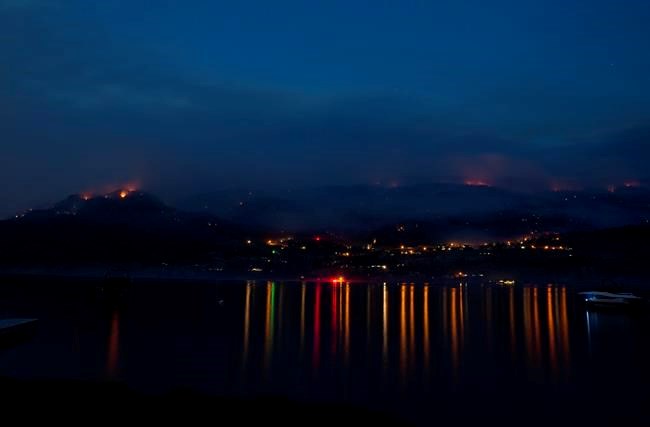 Flareups are seen from the Christie Mountain wildfire along Skaha Lake in Penticton, B.C. Thursday, August 20, 2020. An evacuation order for a fire in the southern Interior of British Columbia has been rescinded while other areas are still seeing raging blazes. THE CANADIAN PRESS/Jonathan Hayward

VANCOUVER — British Columbia declared a state of emergency in both 2017 and 2018 during two record-setting years for wildfires. Here's a look at B.C.'s wildfire history:

Fires in 2020: The latest statistics were published Wednesday and show that 3,784 hectares had burned in the province from the 540 fires that had started so far this year.

Abundance of fuel: Prof. Lori Daniels of the University of British Columbia's department of forest and conservation sciences said Indigenous people in the south Okanagan area regularly used fire to cultivate food and medicinal plants, create habitat for game and protect their communities.

"In the absence of Indigenous cultural fires and with fire suppression over the last century, the forest has grown in and filled grasslands, so we have more trees and burnable material."

Daniels said she and her research team have worked in the Penticton region where one of the most serious fires started this week. She said the blaze in the Penticton area is within the normal range of fire pattern that would be seen in any given summer, especially for that region.

Conditions this year: The fire near Penticton comes during a period hot and dry conditions. "We've had a relatively cool, wet summer. So, this is our first, one of the first major fires that is burning in the Okanagan," said Daniels.

Provincial government response: Thompson Rivers University in Kamloops was chosen last month to do research that will improve the province's ability to forecast, prevent and respond to wildfires. Forest Minister Doug Donaldson said the research will help in providing more information about the changing nature of wildfires and improved approaches to battling them.

"Research has a big role to play, especially during these times where fire behaviour has changed drastically," said Donaldson. "This is what the experts tell me that with the climate emergency we are seeing bigger fires. The fuel load is different. The dry out conditions are different as the weather patterns change."

Climate change: In a paper published in January 2019, researchers from the Canadian Centre for Climate Modelling and Analysis said hot, dry weather directly caused by greenhouse gas emissions increased B.C.'s fire risk in 2017 by up to four times. The same factors are likely to have increased the amount of land scorched by up to 11 times.

The scientists also compared the average area burned each year between 1961 and 1970 with the area that was scorched in 2017. The paper attributes about 90 per cent of the 12,000 square kilometres burned in 2017 to the influence of climate change.