36 weeks ago I read a theory that going for 50 coffees with people you've never met is the entrepreneur's equivalent to the theory that doing anything for 10,000 hours will make you an expert on it.
0
May 14, 2012 8:12 AM By: Bob Kronbauer

Meet Yuri Artibise. Public policy analyst, urbanist, and sharer of ways to make our cities more livable, community-oriented places. He currently works full time as the Director of Community Engagement of Vancouver's PlaceSpeak which, in case you're not already familiar, is an online location-based community consultation platform. He also contributes articles to Spacing Vancouver, heads up Vancouver's Jane's Walks and has his finger in miscellaneous other urban pies. 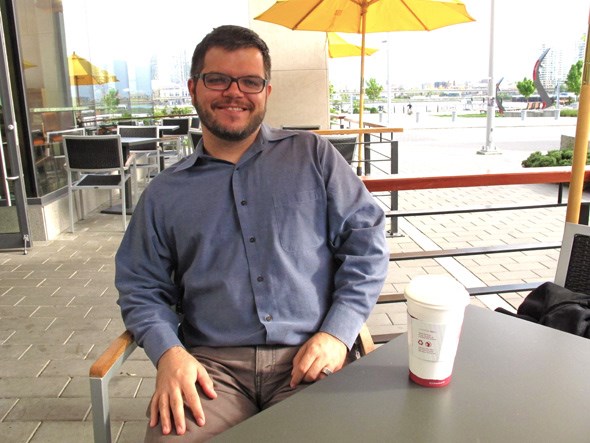 We had chatted briefly in the past but prior to this coffee we'd never had a chance to really sit down and rap, and seeing as he's actually a new neighbour of mine in the Village on False Creek we decided to meet up first thing in the morning at Terra Breads before we both headed to our offices. He's been living in the Village for the last few months and so we talked about the community down there, then about his work with Placespeak, about the future of the viaducts (which you can see behind him in the distance) and about housing and development in Vancouver. We also discovered that we have more in common than facial hair and our thoughts on change being a constant: we've both spent years living and working in the states. In neighbouring states, no less; he in Arizona and I in California.

It was great to be able to spend some time exchanging ideas with Yuri and I really look forward to the possibility of collaboration and just general good-neighbour-ness with him in the future. Follow him on TWITTER, have a look at his PORTFOLIO SITE, and of course bookmark PLACESPEAK. Oh, and take the URBAN FUTURES SURVEY already! It's one of the ways that you can truly help shape the future of our region. Don't blow it!

11 fitness studios offering MASSIVE savings on classes, personal training, and yoga in Vancouver
Jan 15, 2020 2:27 PM
Comments
We welcome your feedback and encourage you to share your thoughts on this story. We ask that you be respectful of others and their points of view, refrain from personal attacks and stay on topic. To learn about our commenting policies and how we moderate, please read our Community Guidelines.