I recently read a theory that going for 50 coffees with people you've never met is the entrepreneurs equivalent to the theory that doing anything for 10,000 hours will make you an expert on it.
0
Nov 11, 2011 10:38 AM By: Bob Kronbauer

Meet Matthew Lazin-Ryder. Associate producer of CBC Radio One's On The Coast program that's hosted by Stephen Quinn (whom I FEATURED earlier this week), he's worked on the show for roughly 4 years now. From what I gather his day-to-day involves a lot of research, talking on the phone, corralling, planning and coordinating, and at the end of the day he'll have produced a great deal of the stories that Quinn is telling on air. We sat down for coffee in the main branch of the Vancouver Public Library downtown after grabbing Starbucks across the street, with the conversation starting on the subject of future collaboration and ending with Matthew telling me a great story about how he got his break at CBC. He had attended BCIT with the explicit goal of one day working for our nation's public broadcaster, and once he completed his schooling hustled for an internship with On The Coast. Just as his internship was ending he broke the story of BC Ferries taking down the paintings of the Queen from their vessels after they became a semi-private company not technically owned by the crown. A public uproar ensued, along with coverage from other major media outlets across the country and the story wound up grabbing the attention of the Monarchist League of Canada who issued official statements opposing the action. In the end, Matthew was kept on as a producer and has delivered many more investigative pieces, my favourite recent one being a series he did on the theft of metals in and around Vancouver and how it's actually a global issue. Listen for Matthew's work on air Monday to Friday from 3PM-6PM on 88.1FM and be sure to follow him on Twitter at @LazinRyder. 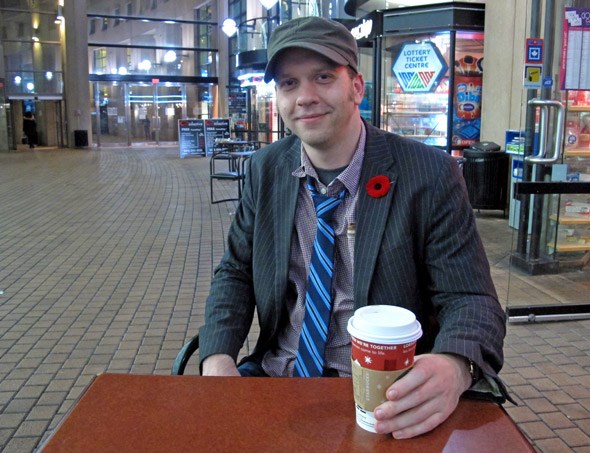 That's it for my running of the CBC News gamut for coffee this week in celebration of CBC's 75th Anniversary. I introduced you to their news director Wayne Williams, radio host Stephen Quinn, reporter Lisa Johnson and finally producer Matthew. There are a ton of other interesting folks working out of 700 Hamilton Street here in Vancouver and I promise to take you to coffee with more of them in the future. Next week I'm going to shift gears and spotlight somebody from another organization you may or may not be familiar with. Bottoms up!

Only a quarter of B.C. businesses confident of restart
May 22, 2020 1:50 PM
Comments
We welcome your feedback and encourage you to share your thoughts. We ask that you be respectful of others and their points of view, refrain from personal attacks and stay on topic. To learn about our commenting policies and how we moderate, please read our Community Guidelines.