Over the next few years I'm publishing 500 Coffees , introducing you to hundreds of people who are doing interesting stuff in and for the city you live in. This is COFFEE #80.
0
Apr 18, 2016 11:45 AM By: Bob Kronbauer

Over the next few years I'm publishing 500 Coffees, introducing you to hundreds of people who are doing interesting stuff in and for the city you live in. This is COFFEE #80.

Occupation: Dispatcher/Customer Service at a local towing company, and Interviewer

Meet Joseph Planta. Last week he taped his 1,301st episode of Planta on the Line, a podcast he's been doing out of his East Vancouver home since 2004(!!!). At 34 years old he has produced and hosted more hours of audio than many professional broadcasters in Canada. He's had me as a guest on his show in the past and was recently kind enough to invite me into his space for this coffee. 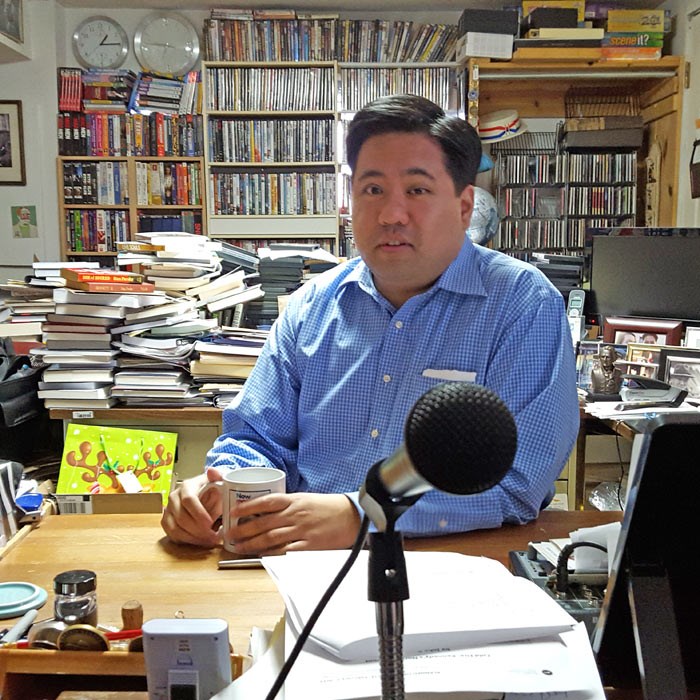 Joseph's studio takes up the most part of his basement, and it is absolutely jam packed with books and collectibles. I shot the photo above from the seat where the guests of his podcast sit and I don't doubt most of them are as distracted by the awesomeness of their surroundings as I was. On the shelves and in various piles are thousands of books ranging in subject from politics to history to... well, possibly every Canadian book published in the past twenty or thirty years. Large sections are dedicated to US politics, with Richard Nixon having his own robust section, and to Joseph's right here (not pictured) is his collection of busts of US presidents' heads.

In his podcast he often notes that he doesn't consider himself a journalist and that he's more of a "consumer" of news, but I don't buy into that. I suspect he might feel that way because he didn't go to journalism school, because while he does share the odd opinion on his show the work he's putting out seems to meet journalistic standards (however I also didn't go to journalism school, so this is simply my take). He interviews people involved in politics, journalism and the arts and over the past few weeks has conducted well-researched, balanced interviews with divisive media figure Conrad Black, Occupy Wall Street co-founder Micah White, publisher Maggie Langrick, award winning authors Yann Martel and Trisha White, and many more. His broadcasts range in length from half an hour to a full hour, and the fact that he's been somewhat quietly churning them out for the past 12 years boggles my mind.

As the editor of this lifestyle blog you're reading I also don't consider myself a journalist (but in my case it's actually true. Ha!), and there are certainly parallels that run between my work over the years with our independent media project and Joseph's. Both were launched out of wanting to produce something to further conversations and to provide people with engaging media to consume, but early in V.I.A's life we went a completely different direction with it; we monetized. This project caught fire a few months after launching in 2008 and it started taking up more than half of my work day, and I concluded that the only way to keep it going was to turn it into a business as opposed to purely an outlet. Over the years we've fumbled through that process, hacking our way in to become a legitimate competitor of the established lifestyle media outlets, occupying a decent market share.

I listen to Planta on the Line regularly and have always admired that Joseph hasn't had to think of a business element for his publishing, and that he's able to keep pumping out interviews week after week without relying on sponsorships. I've admired it but have also been baffled by how he's done it, and what I found out during our coffee is that he's able to keep gas in the tank for his project partly because he has a regular job working at a local towing company. The other fire is simply his personality and drive. It's obvious that he loves reading up on his subjects, then digging in with them to unveil things his listeners wouldn't hear about anywhere else. He loves researching, sharing and challenging ideas, asking tough questions - and easy ones - and packaging all of that up and sharing it with people who may enjoy taking it in almost as much as he enjoyed the process of creating it. When I asked if he ever considered making a career out of it he mentioned that he once thought about transitioning the skills he's developed to become an on-air broadcaster at one of the local radio stations, but he feels as if that ship has sailed. He's perfectly content doing Planta on the Line for no money, producing what I feel is one of our country's most valuable independent media projects. But again I will disagree with him and say that that ship has far from sailed (he's only 34!), and I would love hearing his deep voice, wisdom and curiosity on the local airwaves. However for now I'm happy listening to that combination through the speakers of my laptop and on my headphones.