Over the next few years I'm publishing 500 Coffees , introducing you to hundreds of people who are doing interesting stuff in and for the city you live in. This is COFFEE #81.
0
Apr 25, 2016 1:20 PM By: Bob Kronbauer

Over the next few years I'm publishing 500 Coffees, introducing you to hundreds of people who are doing interesting stuff in and for the city you live in. This is COFFEE #81.

Meet Lisa Christiansen. Traffic/arts reporter for CBC Radio's On The Coast, heavy metal fan, and co-host of a podcast called Pop This! We met for lunch at Nosh in the TELUS Garden building on Georgia and lucked out by getting a table next to the grand piano, and next to/over the koi pond (did you know they had koi there? Me neither). 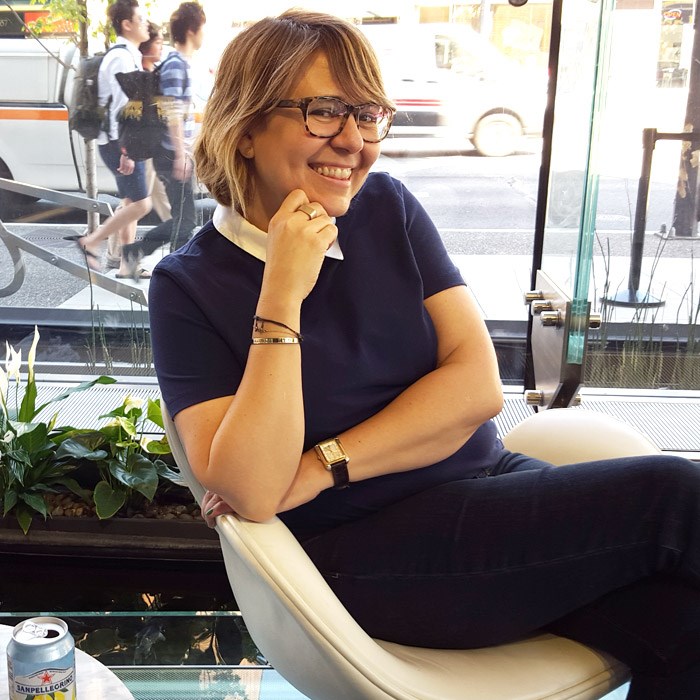 For the most part the subjects in this series are strangers to me before we meet but there are people I already know who I want to spotlight through this forum, and Lisa is one of them as she's one of my favourite media personalities in Vancouver. I've known her since she worked at CBC Radio 3, and we once served on the Polaris Music Prize jury together.

Lisa has been working at CBC since 1999, starting at the independent-Canadian-music-centric Radio 3 then moving over to Radio One in 2012. From 3-6pm on most weekday afternoons you'll hear her conversing with Stephen Quinn on the award-winning On the Coast program. A few years back the show went from an 8th place ranking to 1st in afternoon radio in Vancouver and as Charlie Smith put it in the Straight, the "absurd traffic banter with Lisa Christiansen" helps keep the show in that number 1 position. If you're a listener you'll know that the days when Stephen is on vacation it just isn't the same. Not that the other hosts who sub in for him on occasion aren't perfectly capable of expanding on the important issues that OTC brings us but the chemistry between Lisa and Stephen and the humour that comes through the airwaves is a tough act to beat.

Pop This is described as "the podcast where two women talk about everything pop culture (and feminism)" but you don't need to be a feminist to enjoy it. Those two talking women are Lisa (of course) and music journalist Andrea Warner. The thing about podcasts like this - the ones where you've basically got a couple of hosts talking throughout - is that you basically just want to hang out with the hosts. Lisa's On the Coast banter often leaves you wanting more, and that's one of the places where Pop This delivers; episodes range from 30-45 minutes and it's mostly just Lisa and Andrea riffing on a topic. It's not specifically geared at Vancouver like her CBC gig and ranges in subject from music to the Kardashians to Las Vegas and why you should or shouldn't go. Broadcasters and journalists are generally smart, thoughtful, interesting people. Lisa and Andrea fit that mold and tend to do a bit of a funny and informative debate on the subjects they tackle, and it's a pleasure to listen to (and to basically hang out with them).

I got some great insight to the beginnings of the show over our coffee. Andrea is a music columnist and often talks on-air with Lisa and Stephen on On the Coast about music. When she did the launch for her book, We Oughta Know, Lisa did an onstage Q+A with her at the event and afterwards they got so many comments about how people loved it and were left wanting more. They decided to give them more and start a podcast, bringing in their fellow CBC employee Andrea Gin (who works at CBC Music) as the producer. That was roughly a year ago, and they've been putting out a new podcast almost every week since.

One thing I was surprised to hear is that the podcast is actually recorded at the Vancouver Public Library's Inspiration Lab. I mean if I worked at CBC and was to produce a podcast with 2 of my co-workers I think I'd probably see what I could do about using a recording studio after hours to make it happen. However as the podcast is really a side project (not affiliated with CBC at all) the three decided to not cross the streams as it were, and record elsewhere. The Lab is the new-ish space at the VPL where they have recording studios, computers, editing bays etc, all for use by the public for free. I haven't seen any other productions like this being worked on there (please send them to me at bobk@vancouverisawesome.com if you have!).

And that's all I've got about Lisa and Pop This. People have told me that they leave these 500 Coffees features wanting more and that I should go more in depth, but they're really just meant as introductions. So you should follow Lisa on Twitter at @lisachristcbc, listen for her on 88.1fm Monday-Friday between 3-6pm and you should absolutely subscribe to the Pop This podcast here so you can hang out with her and Andrea every week from here on out.