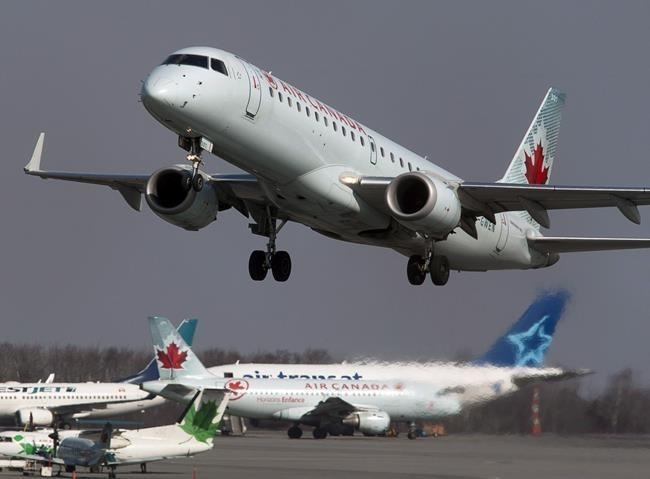 An Air Canada jet takes off from Halifax Stanfield International Airport in Enfield, N.S. on Thursday, March 8, 2012. Air Canada, which has cut roughly half its Canadian workforce, says it will apply for Ottawa's emergency wage subsidy program and retain or return affected employees to its payroll for the program term.THE CANADIAN PRESS/Andrew Vaughan

MONTREAL — Air Canada, which has cut roughly half its Canadian workforce, says it will apply for Ottawa's emergency wage subsidy program and retain or return affected employees to its payroll for the program term.

The airline announced last month it would cut about 16,500 jobs as part of a cost reduction program due to the COVID-19 pandemic and imposition of global travel restrictions.

Air Canada says that depending on wage levels, many employees will receive more under the Canada Emergency Wage Subsidy program than they would from employment insurance plus they will maintain their health insurance and other benefits.

The airline has reduced its seat capacity by 85 to 90 per cent due the pandemic crisis and says any near-term recovery is will rely on the lifting of domestic and international travel restrictions and return of passenger traffic.

Senior executives will also forgo between 25 and 50 per cent of their salaries while members of Air Canada's board have agreed to a 25 per cent reduction. All other Air Canada managers will have their salaries reduced 10 per cent for the second quarter.