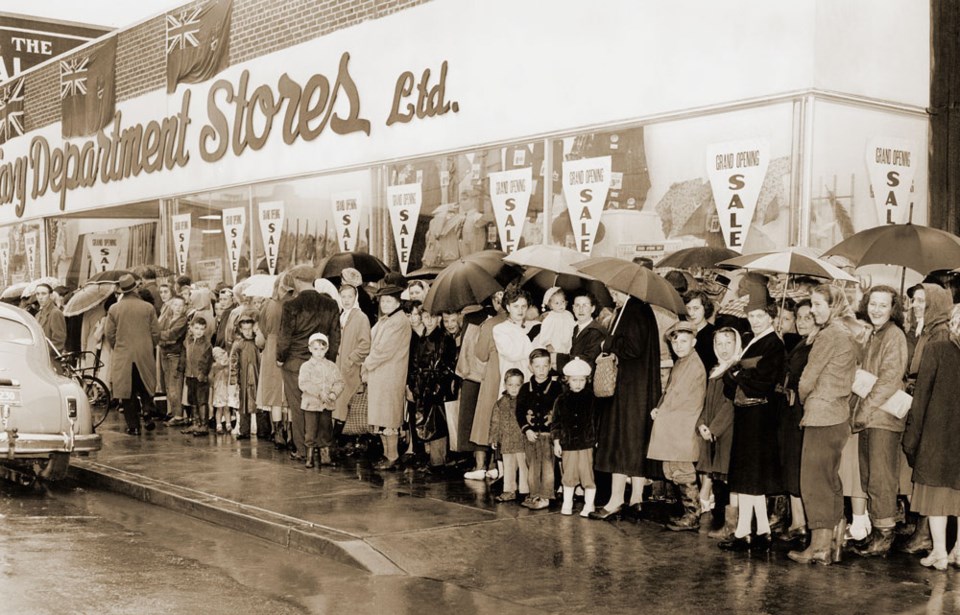 An Army & Navy store grand opening sale of yesteryear - and certainly without the distancing protocols we can expect at their closing sale. Photo courtesy Army & Navy

After 101 years, Army & Navy has shut their doors for good. But before the bargain chain says their final farewell, they will open the doors to one Metro Vancouver location - as well as one in Calgary - to hold what they're calling a "final, multimillion-dollar liquidation sale."

All departments will be featuring items for sale, at discounted prices. The company says this means that ladies' spring-summer apparel and shoes will be priced at 40% off, while other inventory such as men’s apparel, workwear, fishing and outdoor supplies, plus groceries will be offered at a 25% discount.

The veteran low-price department store announced earlier in May that they would be ceasing all operations in the wake of the COVID-19 pandemic.

First launched in 1919 in Vancouver, Army & Navy had five remaining stores in B.C. and Alberta, all of which they shuttered - initially for what they thought would be temporarily - in March.

"The economic challenges of COVID-19 proved insurmountable," says Army & Navy of their decision to close up shop.

The 80,000-square-foot New Westminster store will be set up so that customers and staff can adhere to all current distancing protocols as mandated by the provincial government.

They've highlighted some of the sale items for us:

The Army & Navy store is located at 502 Columbia Street in New Westminster.