Is it worth buying gas in the U.S.? This Metro Vancouver man's app has the answer

A Coquitlam man has a created a mobile app to help people calculate whether it’s worth driving to the U.S. to pick up gasoline.
0
May 2, 2019 1:41 PM By: Tri-City News

A Coquitlam man has a created a mobile app to help people calculate whether it’s worth driving to the U.S. to pick up gasoline. 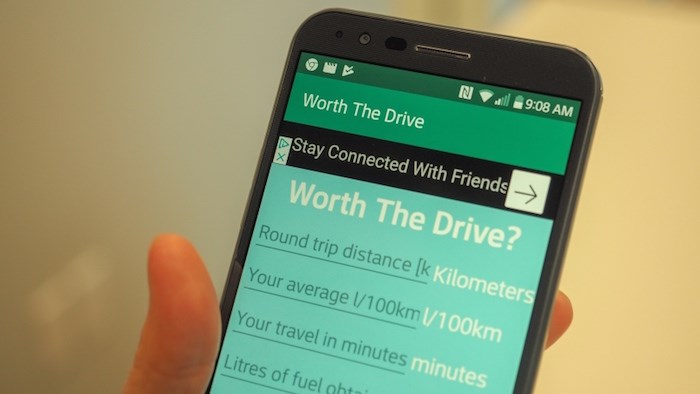 The app is so far only available on Android phones. File photo.

Pinetree Secondary graduate Gilson Tsung launched the 'Worth the Drive' app about a week ago after teaching himself how to code for the mobile Android platform, and since then it has racked up over 5,000 downloads.

Unlike the popular gasbuddy.com website, Tsung says his app is not a way to find cheap gas, but rather a tool to check whether your vehicle’s fuel efficiency, distance and time from the U.S. border make the trip worth it.

The largely stripped down app is void of fancy art work or graphics. But that makes it “super simple,” says Tsung.

After entering your data, the app gives you the total fuel required for your trip, how much you will save, and how much you are “making” an hour by travelling to the U.S. to fill up.

Tsung, who drives a Toyota Celica, says he saves somewhere between $40 and $50 per trip, though he does fill up a few jerry cans for good measure.

And while Tsung says he sees a future where gasoline cars are obsolete and electric the norm, until then, he said he's looking for any edge to save a few dollars.

“Our gas prices are ridiculous in our city,” he said. “My personal philosophy on gas prices is it shouldn’t be this way.”

“We like to complain a lot, but rarely do we take any action.”