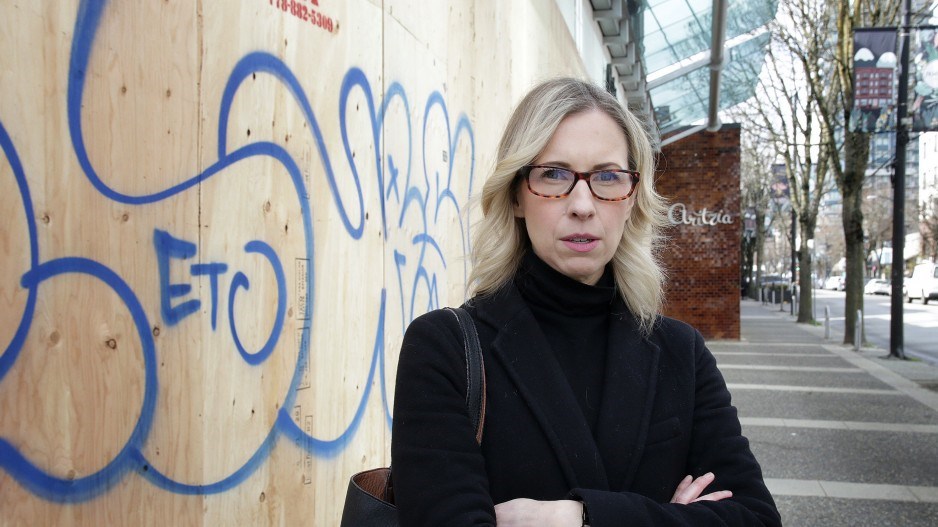 It is hard to recognize Vancouver’s longtime high street for fashion.

The heart of the Robson Street district, between Hornby and Bute streets, is lined with streetfront retailers that have boarded up windows to prevent looting while Robson is nearly void of foot traffic.

People are staying home to try to limit the spread of the COVID-19 virus, but at some point the pandemic will be under control, and governments will allow stores to reopen.

The question is how Robson Street will bounce back – and what the extent of the damage will be for its retailers’ bottom lines.

After all, a Mustel Group survey earlier this month found that more than 50% of B.C. business representatives surveyed were concerned that their enterprises would be insolvent or would lack the fiscal capacity to restart.

Most of the street’s retailers closed around March 18, or just after large department stores closed.

So, as CF Pacific Centre owner Cadillac Fairview is "assessing" whether to close its mall, pedestrian traffic on Robson Street has nosedived.

In 2014, the Robson Street Business Improvement Association (RSBIA) installed pedestrian-traffic counting devices outside the Sephora store at 1045 Robson Street and another near the corner of Bute and Robson streets.

RSBIA executive director Teri Smith told Business in Vancouver that pedestrian traffic on the street had been lagging behind slightly in the months prior to the pandemic because access to the street was hindered when the City of Vancouver fenced off the 800 block to build a $5.4 million permanent plaza. Anyone on Robson Street outside Nordstrom consequently had to walk either to West Georgia or Smithe streets, then up a block and back to Robson Street to get to the street’s big-brand retailers.

“I wouldn’t say that we were 100% in support [of the 800-block closure] when it was originally proposed by city council, but there was a point where we knew it was going to be going ahead and so we didn’t oppose it,” she said of the project originally expected to be completed this spring but now likely to be done later this year at the earliest.

When that plaza opens, Robson Street’s main strip could see a resurgence in traffic although it is unclear how many stores will reopen.

Retail Insider Media owner and retail consultant Craig Patterson said that while the pandemic has likely thrown many small businesses into insolvency, many large stores had racked up debt before the crisis and may face their own retail reckonings.

“Victoria’s Secret may not make it,” he said, noting that the U.S. lingerie giant’s 30,000-square-foot flagship store on the northeast corner of Burrard and Robson streets could close.

He had been speculating about the company’s demise, and exit from Canada, in February, before the pandemic took hold in North America – when Sycamore Partners committed to buy a 55% stake in Victoria’s Secret from L Brands for about US$525 million.

"I would be highly surprised if Victoria's Secret exits Canada but they have just gone through the process where they are going to be selling the majority of that company to new investors, new owners, so I have no clue what is going to happen," he said.

Berkowitz also represents companies such as Uniqlo, which has been seeking a large downtown Vancouver location, but he would not speculate on which tenants might want the Victoria’s Secret space were the location to close. 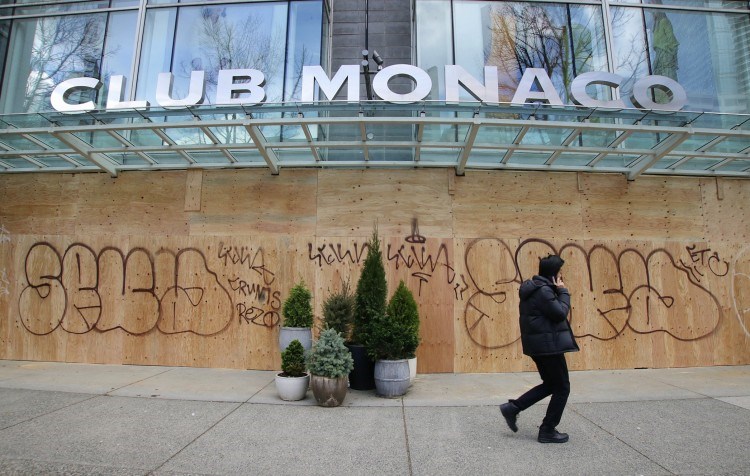 Club Monaco is one of the many retailers that has put plywood over windows at a Robson Street store. Photo by Rob Kruyt/BIV

Retailers and analysts tend to agree that the effect of the pandemic will stretch beyond the months-long closure of stores, prompting a longer-term psychological shift among consumers.

“Consumers are developing habits and mentalities, and this can happen quite quickly,” Patterson said.

He pointed to a study by Montreal-based e-commerce research agency Absolunet that found online sales doubled in the last two weeks of March.

“Consumers may also be a little bit hesitant to go out into physical spaces in the months to come, when stores do open at some point, because there will still be a concern of a second wave of the pandemic, or a mutation or something along the lines of some perceived lack of safety – even if that isn’t something that is reality.”

The flip side, Patterson said, is that some people, particularly the younger generation, may feel angry at having been cooped up for months and go on a spree of what he called “revenge spending,” by opening their wallets in celebration once they can return to stores.

Boys’ Co. owner David Goldman chuckled when BIV asked him if he thought a revenge-spending stimulus could be on the way.

He closed his 31-year-old store on Robson Street in 2018 because sales were lagging, rent was high and he had doubts about the street’s future, he said.

“I think a lot of people, including young people, are going to change their habits – shopping habits, congregating habits, what they do when they go out.

“I believe that the face of not just fashion retail, but commerce, is possibly changed in some permanent ways. We just don’t know yet.” •