Step into Vancouver's history with this free walking tour app

Tourists and residents can take a step back in time and look at how things used to be in Vancouver with the help of a free historical tourism app.
Elisia Seeber Nov 13, 2018 7:17 AM

If you’ve ever been strolling around Vancouver and thought, ‘I wonder what this place looked like a century ago,' well now there’s an easy way to see.

Tourists and residents can take a step back in time and look at how things used to be with the help of a free historical tourism app. 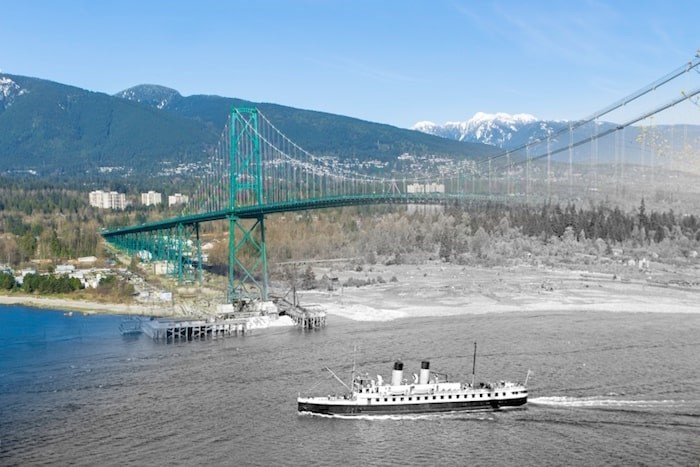 A small Union Steamship is passing under the Lions Gate Bridge during its construction. (1938 and Now) Photograph By On This Spot/Vancouver Archives AM640-S1-: CVA 260-844

It’s called On This Spot.

It allows users to compare the old with the new through historic photo cross-fades, learn about the city’s local history and culture and appreciate long-gone architecture. 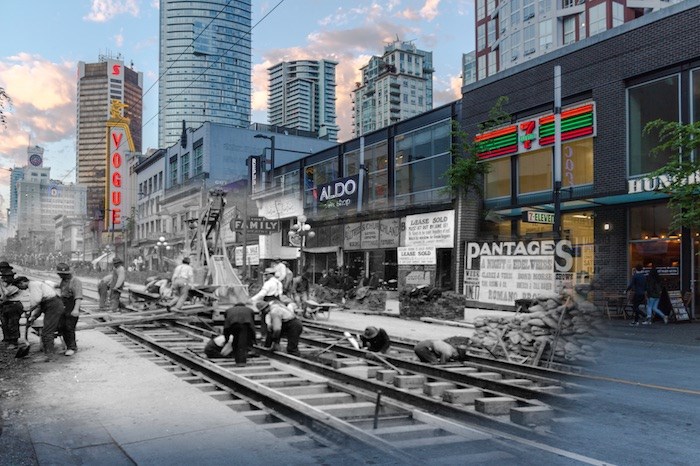 A work crew carries out the arduous task of laying streetcar tracks on Granville Street. You can see in the background the brand new Vancouver Block which dominated the skyline at this time. (1912 and now) – On This Spot / Vancouver Archives AM54-S4-: Str N244.2

“It’s very important to know what your history is,” said Edmunds, On This Spot’s chief operating officer.

“Learning about Canada’s independence and the high level picture of Canadian history is readily available.

The group partners and works with archival, historical, heritage and business associations to gain access to photographs and information and bring the tours to life.

“We source photos from archival associations, like Vancouver Archives, and find the coordinates of the photo and replicate it now,” Edmunds said.

“Then, we’re able to edit the photos so they transition seamlessly between then and now.” 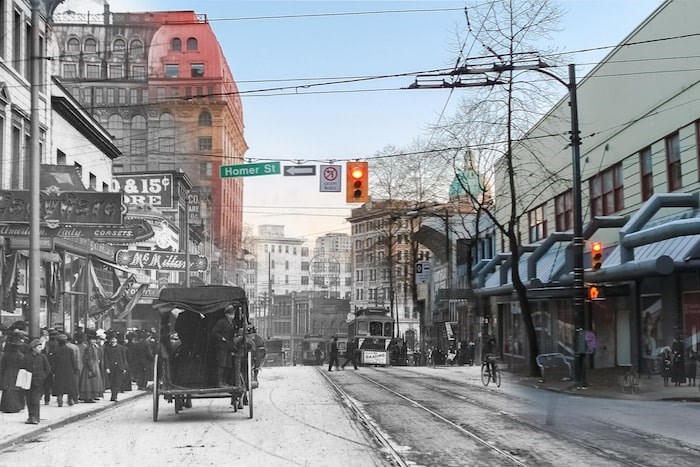 Looking back down Hastings towards the Dominion Building. (1910 and Now) – On This Spot / Vancouver Archives AM54-S4-: Str P210

What’s really cool is the app even allows users to put themselves in the picture, using a built in camera.

“Anybody can create their own then and now photos of all our spots,” Edmunds explained.

“You follow the tours and the app will guide you to the spot that photo was taken in history and you can do a then-and-now cross fade off it and read about the history of the spot, but you can also take your own photo and cross fade the two.

“People can put themselves into the history of the spot.” 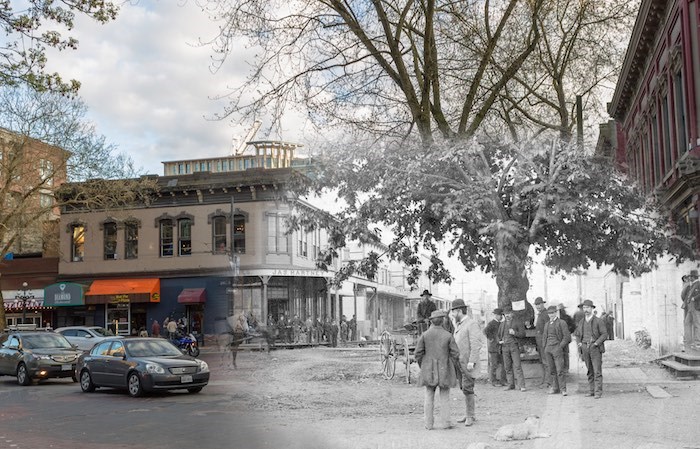 People watched helplessly from ships, the shallows, and Hastings Mill as the Great Fire of Vancouver swept through the heart of the city days after this photo was taken. Everything in this photo was burned, including the maple tree. (1886 and Now) – On This Spot / Vancouver Archives AM54-S4-: Str P83

The tourism project has grown organically since its launch almost two years ago and the app now features tours in nine Canadian cities, including Winnipeg, Nanaimo, Victoria, Ontario and Alberta.

What started as a hobby for three friends has almost become a full-time gig for all of them.

“We all have a passion for history but it was definitely Andrew [Farriss's] brain child,” Edmunds said.

He said the idea stemmed from a growing interest in a historic then and now photo blog that Farris, a historian, had created a few years ago.

“About a year and a half later he started getting a lot of interest in it from a bunch of international cities he had featured and he decided to embark on a project creating historical walking tours throughout Vancouver using the coordinates on archive photos,” Edmunds explained.

Some of the tours include Vanished Vancouver, which takes viewers to places where historical buildings used to be.

“You can learn about the building that was there and the significance of that building to Vancouver’s history,” Edmunds said.

Other popular tours show the history of the Seawall in Stanley Park, the Great Fire of Vancouver in Gastown and the story behind Joe Fortes, now widely known for the restaurant named after him. 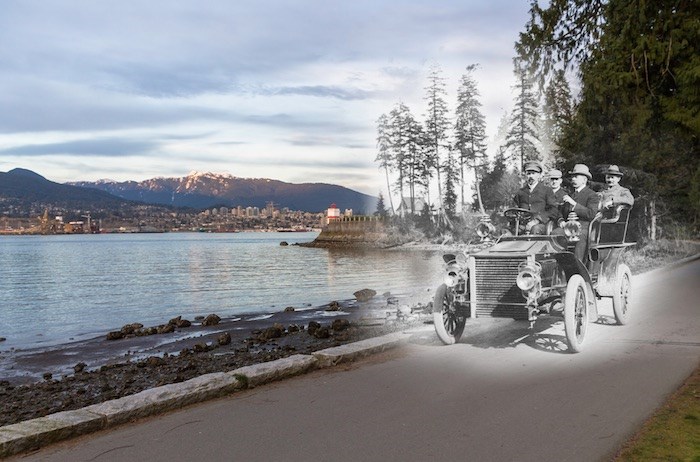 Four men out for a leisurely drive around Stanley Park. For the standards of the time their car is rather antiquated. By the 1920s most cars had roofs and windshields, whereas early cars often didn’t bother because the extra weight put too much stress on the engine. (1910s and Now) – On This Spot / Vancouver Archives AM336-S3-2-: CVA 677-981

Edmunds said a lot of the historic organizations had walking tours and information but it hadn’t been brought into the digital age.

“We help them create tours for their city,” he said.

The app has so far been downloaded 20,000 times and it’s growing.

“People are really taking notice of it and using it to learn about local history,” Edmunds said.

The app's photos became so popular it led to the group producing then-and-now postcards and prints that can be purchased on their online store or in a number of gift shops around town.

The team plans to launch more tour locations in Canada and the U.S. in 2019.