East Vancouver’s own Japandroids performing at the Biltmore Cabaret. In March, I wrote an essay for V.I.A.
0
Nov 18, 2014 8:30 AM By: Chris Bruntlett 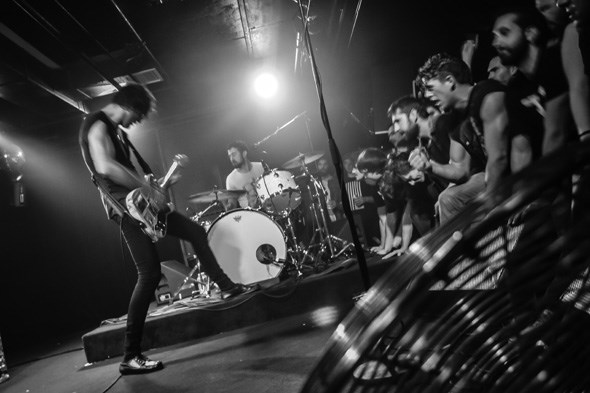 East Vancouver’s own Japandroids performing at the Biltmore Cabaret.

In March, I wrote an essay for V.I.A. about Charles Montgomery’s fantastic new book Happy City, and how it perfectly articulated our family’s own decade-long journey from the suburbs of Ontario to the heartbeat of Vancouver. In the coming months, I’m going to share with you the experiences unique to this city that fill us with pride, joy and excitement; allowing us to build a happier city, just by living it. 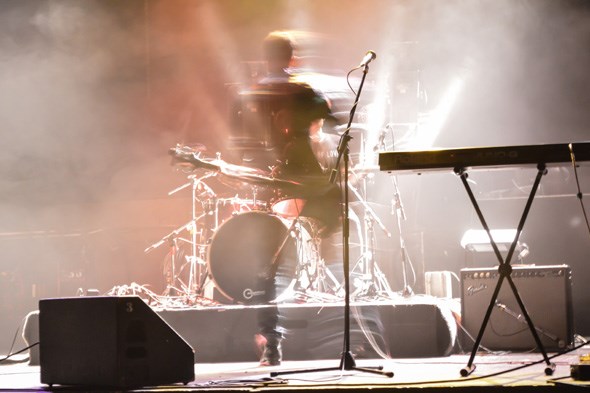 Vancouver new wave band Girlfriends and Boyfriends on stage at the Rickshaw Theatre.

I was just fifteen years old when I attended by my first rock show, but I remember it as if it were yesterday: The forward surge of the crowd as the lights dimmed and the band took the stage. The bass drum pounding and guitar feedback ringing so loud, I could feel them both in my chest. The sudden sensation of people floating over top of me, and then being lifted up to crowd surf myself for the very first time. The act in question was Tripping Daisy. The venue a long defunct, tiny basement bar in my hometown of Kitchener called The Volcano; a gig no doubt booked months before their hit “I Got A Girl” propelled them into international alt-rock stardom. 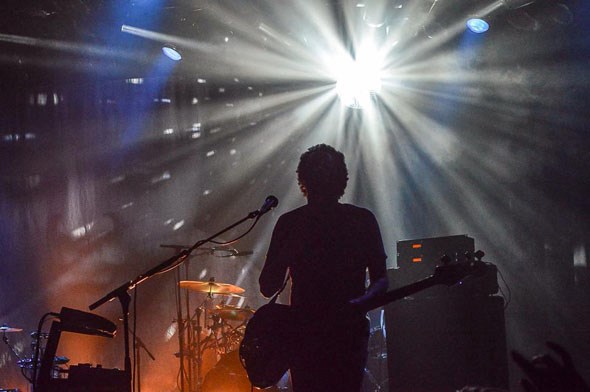 Manchester’s Elbow – a band we’ve had the pleasure of seeing in both Toronto and Vancouver.

I woke up the next morning a changed teenage boy, my ears ringing and muscles aching; suddenly bent on seeing as many live acts as humanely possible. But the opportunities in suburban Ontario were few and far between, and before I knew it, my classmates and I were finding new and inventive ways to make the 120-kilometre journey into Toronto to satisfy our craving. As if we didn’t have enough motivation to get our driver’s license, we were suddenly dependent on a combination of late-night Greyhound bus rides, car services, taxis, the Toronto Transit Commission, and hitching rides with friends, parents, or if we were really desperate - total strangers. 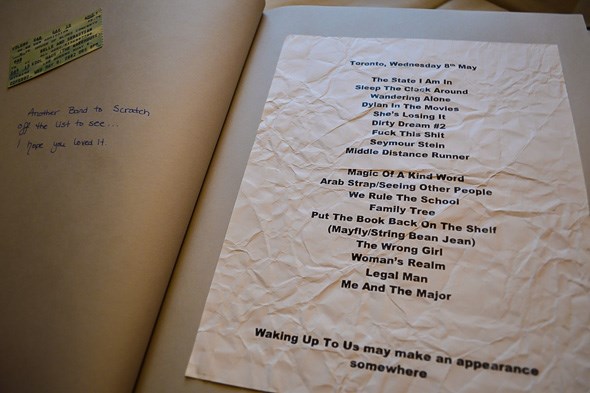 The set list from Belle and Sebastian’s May 8th, 2002 gig at Toronto’s Kool Haus.

The late ‘90s were a golden age of indie rock, and we made the most of it; worshipping at the feet of our idols, at the height of their creative power: Weezer, Oasis, Blur, Radiohead, The Verve, Ben Folds Five, Manic Street Preachers, Beck, Supergrass, Super Furry Animals, The Beta Band, and Belle and Sebastian (for many of whom, Toronto was their one and only Canadian stop on a North American tour). Our appetite for live music was insatiable, and not even a pricey, physically exhausting, 90-minute trek up the 401 expressway would stand in our way. 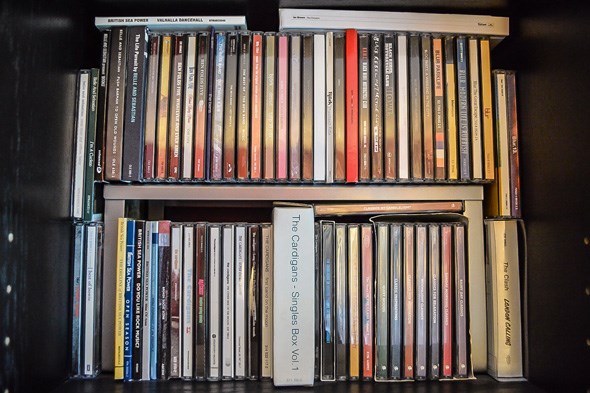 A selection of the 200+ compact discs I still proudly display in my Living Room.

Our regular pilgrimage to the (seemingly) Centre of the Universe served two intent purposes. In addition to stops at legendary venues like Massey Hall, The Opera House, Horseshoe Tavern, and Maple Leaf Gardens, we also began discovering their celebrated record shops: such as Sonic Boom, Rotate This, and the iconic neon sign of Sam The Record Man; hunting down hard-to-find imports, EPs, singles, and box sets of our favourite acts. My compact disc collection quickly became another obsession, which I carefully sorted alphabetically (something for which I am still teased), and displayed with immeasurable pride. 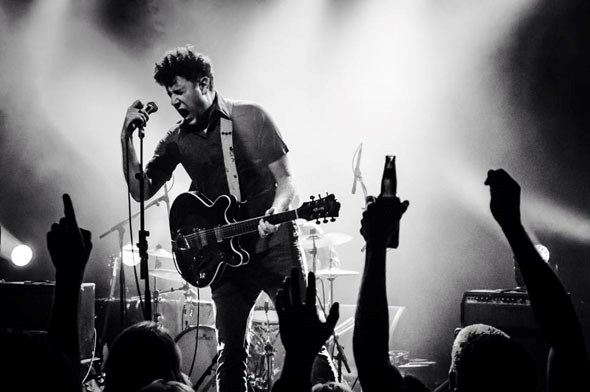 Guelph’s Constantines – another act we’ve been lucky enough to see on both sides of the continent.

While I haven’t bought a compact disc for many years, every one on my shelf continues to evokes a unique time and place in my life: stumbling across it in a rack, taking it back to wherever I lived at the time, delving into the sleeve art and liner notes, and listening to the entire collection of songs, from beginning to end. These are all dear things we have lost, as recorded music becomes an increasingly abstract concept, with little-to-no financial value. We suddenly have everything a musician has ever recorded at the tips of our fingers, which is both a blessing and a curse. 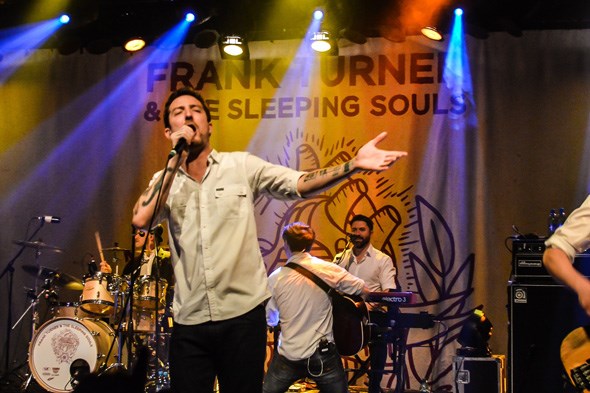 Fast-forward fifteen years, and things haven’t changed much on my end, except my location, and proximity to those places where I spend my time and money. While raising a family sometimes makes my music habit a costly indulgence, living in East Van makes it all the more accessible. I have so many incredible venues at my doorstep, including – but certainly not limited to – The Biltmore Cabaret, Media Club, Electric Owl, Vogue Theatre, Orpheum, Commodore Ballroom, and Rickshaw Theatre. But rather than a three-hour round-trip to a gig, I now hop on my bicycle or the Skytrain, and I’m often there in less than 15 minutes. 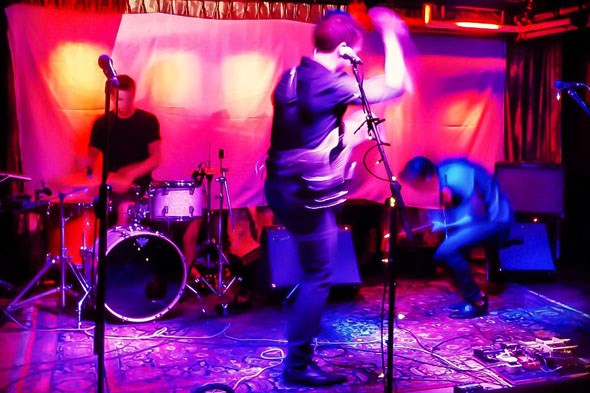 Local rock trio City of Glass, with whom our family has become very good friends.

The incredible diversity of artists I’m able to see in such intimate venues is something I still have difficultly comprehending. I’ll gladly take the dark, sweaty confines of The Biltmore Cabaret over Rogers Arena, any day of the week. You simply cannot beat the collective experience of rubbing shoulders with a few hundred of your closest friends, singing along to every single word. And it’s not just prominent international acts I find the time and money to see. There are so many talented local acts that deserve your attention: Japandroids, City of Glass, Young Liars and The Valuables, to name a few, many of whom have become good friends of ours, just by hanging out before and after their gigs. 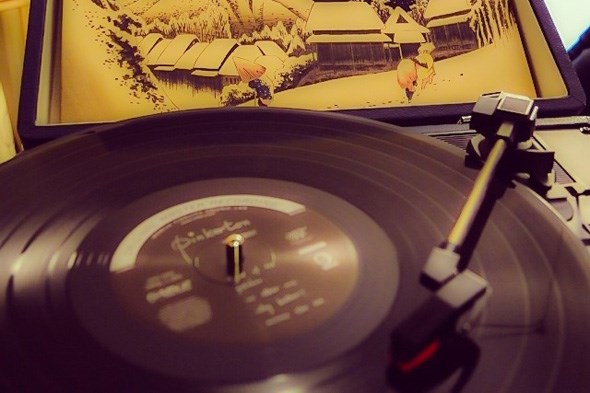 One of my first vinyl purchases, and the defining album of my teenage years: Weezer’s Pinkerton.

My passion for recorded music was reignited over Christmas, when my wife unexpectedly picked me up a turntable as a gift. After carrying around my music in my pocket for too many years, I couldn't have been more excited about physically collecting and investing in albums I love (all over again). While almost certainly rooted in nostalgia, there’s something incredibly pure about the act of waiting for payday, going out of your way to make a special trip to Red Cat, Audiopile, or Zulu Records, digging through their stacks of vinyl, carefully selecting one or two to bring home, and then racing back to give it a spin. 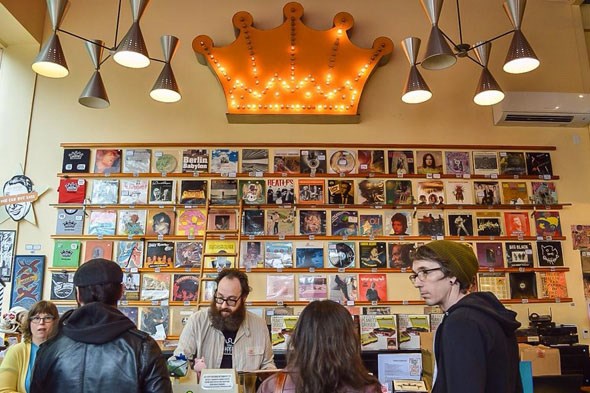 This year, on ‘Record Store Day’, we found ourselves digging for vinyl in Portland’s Jackpot Records.

In writing this piece, I dusted off a scrapbook my wife made for me that contains the hundreds of ticket stubs, set lists, and gig posters we’ve collected over the years. Each item had its own story: how we got there, the opening act, and what else was happening in our lives at the time. Music has always been there to score our relationship; from the day we met, to our wedding night, the birth of our children, and untimely deaths of friends and family. The places we experience and purchase music continue to play a crucial role in our day-to-day existence, as well as the many great folks we've met along the way. There’s no doubt these cultural hubs are one of the glues that hold our city together. We just need to stop taking them for granted, or they might disappear forever.

Chris Bruntlett is the co-founder of Modacity a multi-service consultancy focused on inspiring healthier, happier, simpler forms of urban mobility through words, photography and film. You can find Chris on Twitter: @modacitylife.