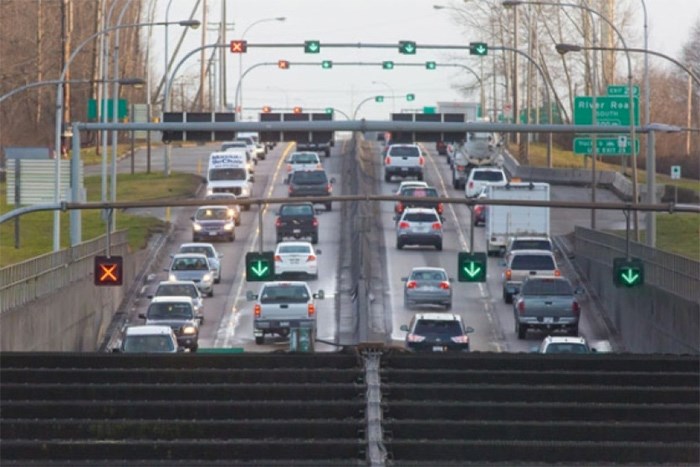 Is the Massey Tunnel Okay?

Working in Vancouver and attending UBC, Powroznik has been frustrated by daily delays, so he decided it was time to come up with a time-saving solution.

“Honestly, the worst thing here is the Massey Tunnel. It controls my life,” he said. “The tunnel can completely ruin your day.”

He decided a few months ago to come up with a quick utility app for checking webcams and times to go through the tunnel. He also wanted to show how bad the situation is at the 60-year-old tube so that maybe one day a solution could be found to alleviate the traffic nightmare.

“I built this app about six months ago. It was purely because every day I was waking up and opening up Google Maps and whatnot to try and find out the traffic situation,” he said. “If I had a 9 a.m. class, it was next to impossible to make it on time. If I had a test, I didn’t even chance it. I was literally sleeping in my car. Ladner to UBC is like 90 minutes and can be even longer with an accident or snarled traffic in the tunnel.”

Powroznik, who has a commerce degree from the Sauder School of Business, is now in his final semester of a computer science degree.

The app, “Is the Massey Tunnel Okay?” was just the numbers at first, but then he added webcams before submitting it to Google and Apple which both rejected it at least six times, Powroznik recalled.

“Apple asked me to add a few features and we eventually got it up there. It went live at 11 a.m. on Tuesday, Aug. 27,” he said. “I made a post on the local Facebook pages to let people know and we ended up with 1,000 downloads in the first 12 hours.”

“I had one of our designers Jerry Kou come up with a design and a few other things,” he said. “Our company helps build apps and websites and we do a lot of IT support for quite a few farms here in South Delta, a few real estate firms too. I actually just quit my job today because now it’s to the point where I can support myself.”

So far the reaction to the tunnel app has been generally positive.

“I made this as a utility app, but people think I made this as a political point, which it is not,” he said. “The app side has been great and lots of positive feedback on that side of things.”

Is the Massey Tunnel Okay? is available for download in the Apple Store on IOS and Android.

Langley’s top retail destination has introduced a new shopping experience in support of local businesses
May 5, 2021 8:00 AM