A Hong Kong Triple O’s; of the company’s 67 locations, eight are now outside of Canada?|?White Spot/Triple O’s Yum Brands Inc.’s (NYSE:YUM) KFC and other industry names are looking to Asia for untapped markets for growth.
0
Oct 6, 2017 6:36 AM By: Glacier Media 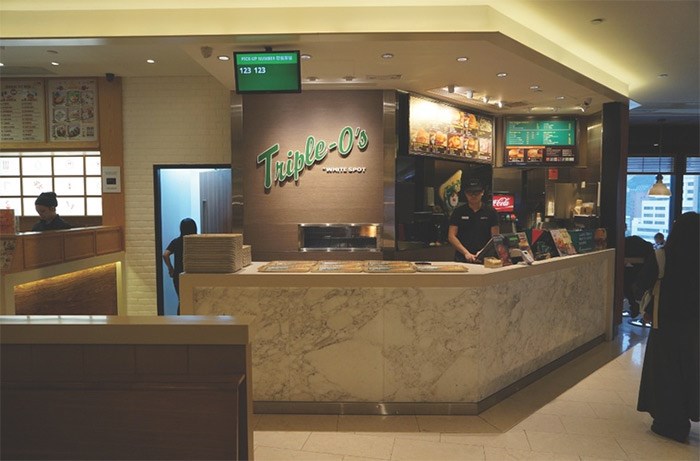 A Hong Kong Triple O’s; of the company’s 67 locations, eight are now outside of Canada?|?White Spot/Triple O’s

Yum Brands Inc.’s (NYSE:YUM) KFC and other industry names are looking to Asia for untapped markets for growth.

Triple O’s – the burger brand created by restaurant chain White Spot in 1997 and named after the restaurant’s famous sauce – is celebrating its 20th anniversary by planning to open between six and 12 new locations annually for the next five years.

Most interestingly, a good number of those – four, to be exact – will likely open not in White Spot’s hometown of Vancouver, but in Hong Kong. That’s on top of the six Triple O’s locations already open in Hong Kong’s busiest commercial districts, in addition to a seventh location and the brand’s first restaurant in nearby Macau, both slated to open next month.

“We are looking for more growth in all of our markets,” said White Spot/Triple O’s president Warren Erhart. “Asia has some of our top locations. Our restaurants in Pacific Place [a mall in Hong Kong’s Admiralty district] and Shatin do more sales on a per-unit basis than any of our stores in B.C.”

Of Triple O’s 67 locations, eight are now outside of Canada; besides the six Hong Kong locations (originally launched in 2004), two other restaurants are now in Singapore.

The trend of fast-food brands looking outside North America might be accelerating, said Andrew Alvarez, lead analyst at consultancy IBISWorld, because “unlike [in] the domestic market, which is largely saturated and hyper-competitive, there’s still a large potential for growth in the Asian market.

“International expansion, even for newer brands with smaller footprints in North America, is central in many companies’ itineraries for success. A number of brands have been successful in Asia, and what has largely made them successful is their flexibility when it came to accommodating local tastes and cuisines.”

There are numerous examples.

While McDonald’s Holdings Co. Japan (TYO:2702) went public in 2001, observers said it finally hit its stride after several 2014 missteps resulted in heavy losses. Part of the turnaround? Along with increased food safeguards (such as the elimination of a Chinese chicken supplier), revamped food items like the locally targeted pork-and-ginger burger and chocolate-covered fries helped tremendously, according to a Japan Times report.

Today, McDonald’s has 2,900 locations in Asia – its largest overseas market.

Meanwhile, consumers in South Korea currently count Dunkin’ Donuts (Nasdaq:DNKN) – the once ubiquitous brand that’s almost completely retreated from Canada – as among the most popular hot spots in cities like Seoul. According to a Boston Globe report, Dunkin’ Donuts achieved its makeover in the Korean market due partially to the country’s coffee craze and by including salads, glutinous rice sticks and bubble-tea lattes on its menu.

Dunkin’ Donuts now has more than 900 locations in Korea, more than either McDonald’s or Starbucks (Nasdaq:SBUX) in that market. Restaurants are often busier in the evenings than in the mornings, unlike Dunkin’s North American stores.

“[Menu localization] requires a large amount of research and development into understanding the local palate,” Alvarez said, adding that one-size-fits-all has proven to be unsuccessful. “Such adjustments in core menu items [have] been crucial to the success of many operators.… I don’t think that a homogeneous approach to a region so diverse as Asia works in the same way it works in the lower 48 of the United States.”

Ironically, Triple O’s has done little to alter the original Canadian taste for Hong Kong consumers, said Cynthia Suen, the owner/franchisee of Triple O’s in the city. The reason? One of the key points leading Suen to bring White Spot burgers to Hong Kong was the familiarity of the product, driven by the heavy flow of Hong Kong residents travelling and moving to Vancouver since the 1970s and 1980s.

“My children were all born in Canada,” Suen said. “I came to Vancouver in 1964. My husband graduated from UBC [the University of British Columbia] as an architect, and my oldest daughter graduated from UBC as well. I’ve lived there for more than 20 years. A lot of Hong Kong people have connections to Vancouver, and they all love White Spot’s burger. So I know the product is good for the Chinese taste.”

Suen, who did not have prior food-industry experience, added that she might consider taking Triple O’s to China – with the blessings of Erhart and White Spot owner Peter Toigo – if Macau proves open to the brand.

But she also has an eye on the ever-increasing competition. Suen noted that New York’s Shake Shack Inc. (NYSE:SHAK) is planning a Hong Kong launch next year with 15 to 20 locations.

Erhart said he has experienced the familiarity of Hong Kong consumers with White Spot’s Triple O burgers first-hand, after having stood in line with customers describing going to restaurants while in Vancouver. But despite its ambitious growth plans, he said the company will approach each additional market with due diligence.

“One of the cautions is that just because a country has a large population, it doesn’t mean the population can both afford the product – because it is more premium – or have the palate to enjoy the food. But, absolutely, this model can work elsewhere with the right partner. An ideal franchisee, either domestic or international, really loves the brand as much as you do. You want to have their values align with yours.”